Earlier this week, I had the opportunity to catch two bands I’ve been meaning to check out for a while, The Amity Affliction and Heartist.  Both of these Roadrunner bands are currently on the Hollow Bodies Tour with Bless the Fall, Silverstein, and Secrets. I caught the tour in its second week as it made it’s way to Rocketown in Nashville, TN. Young up-and-comers, Heartist, opened up the night with a 6-song set before a venue that was already packed. If you haven’t heard of these Orange County metallers, you’re not too late to the party–they have two EP’s out, but their full-length debut won’t be out until this Summer. The band opened their set with a brand new song that had just premiered the day before entitled “Pressure Point,” before launching into several songs off of their two EP’s, the majority off of their 2012 release Nothing You Didn’t Deserve (Roadrunner).

After a set from Secrets, Australian metalcore giants, The Amity Affliction, took to the tiny stage. This was my first time getting to see TAA live and while I was greatly impressed with their performance, which I’ll get to in a moment, it was the message that vocalist Joel Birch had for the audience that impressed me the most.  If you aren’t from around Nashville, you might not be familiar with Rocketown, which was founded by Christian musician Michael W. Smith, or its policy of censoring bands. You may, however, have heard of their firing of a 7-year employee of the venue, purportedly for wearing a shirt for the band, Hostage Calm that bore a message supporting marriage equality–a move that sent shockwaves across the blogosphere last year and led to several prominent musical acts boycotting the venue and moving their scheduled shows elsewhere in Nashville.  Since then most bands seem to have gone back to just playing the venue because it’s one of the only all-ages clubs around Nashville that will book heavier music.

Getting back to The Amity Affliction, vocalist Joel Birch must have been aware of last year’s controversy, taking to the stage with his hand held out, with “GAY IS OK” written large letters on his palm (see photo below). Later on, halfway through their set, a fan yelled out “You guys are f*cking legends!”, to which Joel responded “There’s a few things wrong with that statement, which in fact I can’t even fully repeat back to you, you see because we’re being censored.” He then went on to tell the audience that the censorship extended beyond lyrical content to the merch that they were able to sell at the venue, some of which apparently promoted ideals that were not welcomed by the Christian venue.  But don’t mistake this for a rant, he wasn’t complaining, instead he took the time to drive home a message to fans that it didn’t matter what they believed in, be it Christianity or atheism or any other religion.  He then went on affirm his support for marriage equality. I realize it’s nothing new for bands to get political, but very few that I’ve seen playing at this venue in the past ~2 years have had the guts to do it–especially since it generally results in the band being banned from playing there in the future–so kudos to Joel and the boys of TAA.

But onto their performance–the band is in a supporting role on the tour, playing before Silverstein and headliners, Bless The Fall.  Currently they are touring one-member short, with guitarist Troy Brady noticeably absent–whether he is simply sitting this tour out, or no longer a member of the band is unclear. That being said they still put on a killer performance, though it was a shorter set than I’d have liked, playing three tracks off their 2012 release, Chasing Ghosts, and 3 from their 2010 album Youngbloods, including fan-favorites “Youngbloods” and “Open Letter”.  The Amity Affliction, like Heartist, have also just put out a brand new track and accompanying music video, entitled “Pittsburgh”. The track is on their upcoming full-length release, Let The Ocean Take Me, out on June 10th in the US via Roadrunner. Despite the brevity of their set, it’s definitely worth getting out to the remaining dates of the Hollow Bodies Tour to catch them play, check out the dates and photos from the Nashville date below!

For more photography from Nathan, visit his Facebook page. 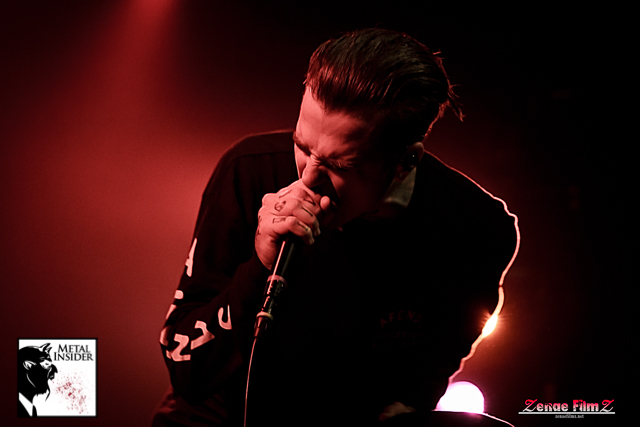