After 12 years, Rock On The Range was laid to rest… in what seemed like a messy divorce, a lifetime of “Rangers” were suddenly left without a home as co-producers AEG and DWP parted ways.

Within weeks of getting the news on the death of Rock On The Range, rumors became a reality when Danny Wimmer announced an all-new festival, Sonic Temple Art & Music Festival.

Promised to be all that Rock on the Range was and more, the only thing for us “Rangers” to do was fight to the death over our new nickname.

Walking into Mapfre Stadium as I’ve done all those years before, fresh new artwork illuminated the stadium. Draped from the top, it could be seen for miles.

Artwork could be found throughout the grounds all available to purchase from the artist if one so chose.

The stage layout was slightly different with both side stages being the same size instead of one larger than the other.

Off to a good start, doors opened on time, and The Jacks and Bad Attack opened both side stages respectively.

Avatar brought Theatre Bizarre to life on stage during their half-hour set, while Beartooth saw massive mosh pits within theirs.

The crowd started to grow as songs from Bad Wolves, Black Label Society, and Parkway Drive could be heard echoing from the stadium.

Lzzy Hale and Halestorm put on a high energy show, as usual, guitar picks and “Do Not Disturb” door hangers autographed by Lzzy herself were thrown through the air by the dozens.

Meshuggah, while not particularly full of energy on stage (barely moving at times) caused the largest pit as they closed the Echo Stage tonight, inciting what from above must have looked like a riot.

Ghost was direct support for the night on the Monster Energy Stadium Stage, and their hour-long set took us all to demonic church. Lead singer Tobias Forge, better know as his persona Cardinal Copia, and his band of Nameless Ghouls played through a set of songs that included “Rats,” “Square Hammer” and “From the Pinnacle to the Pit.”

Closing down the first night of Sonic Temple was none other than System Of A Down. I like many others was stoked to finally see SOAD live. Although the music brought back many fond memories of days gone by, the stage presence just wasn’t there for me.

A fantastic lighting rig set the tone and was paired perfectly with the music, but lead singer Serj Tankian barely moved. With the exception of raising his hand to imitate high notes as he was hitting them, there was no movement. For me, remembering the music videos, as well as the spastic tones in their music, I expected more erratic movements.

Witnessing them live was still amazing, and I would pay to see them again any day.

While onstage, mid-set, Lzzy Hale pulled a young girl on stage whom she had met at the meet and great hours earlier. Proclaiming her as their number one fan, she pulled off her freshly played guitar and gave it to the little girl, whose jaw dropped in amazement. Its good to see that some bands, no matter how big they may be, still appreciate fans at this level. 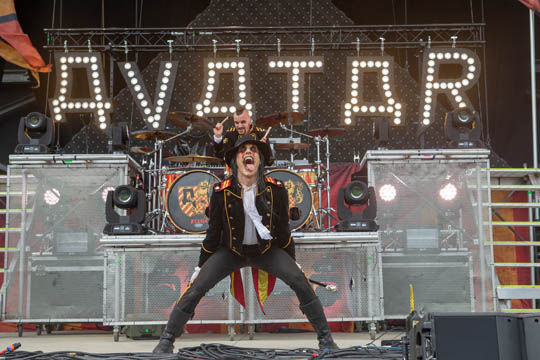 With calls for rain being rumored, The Plot In You, and No1Cares opened Sonic on their scheduled stages. As the day continued to progress with no storm just yet, Boston Manor, Black Coffee, While She Sleeps and Movements all played to the early crowd slowly shuffling in, still tired from the night before.

Once again, the tornado that is Fever 333 took the main stage and left nothing standing. Lead singer Jason Butler was given a lot of slack on the microphone and tested its limits by making it out into the stadium bowl and climbing on an entranceway during their hit song “Burn It.” Returning to the stage, they tossed garbage cans in the air, pulled up the carpet and even crowd surfed in a piece of luggage.

The Black Dahlia Murder saw a large pit during their 30-minute set, and In This Moment put on a play as usual with lead singer Maria Brink and her dancers changing throughout.

Gojira brought A LOT of pyrotechnics, with flames shooting everywhere, while Killswitch Engage just brought pure raw energy. Randy Blythe of Lamb of God, made jokes about finally making it to the main stage after all of those years overcrowding the side stages and causing havoc. His only request to fans was to help them “Tear this (the Stadium) Motherf***er down!!”

In what I thought was an odd placement, The Cult closed out the Echo Stage today. Come to find out that The Cult was celebrating the 30th anniversary of their Album Sonic Temple.

Papa Roach played as direct support for headliner Disturbed and performed through a barrage of their greatest hits including “Last Resort,” “Born for Greatness” and “Gravity,” which saw Maria Brink join Jacoby on stage for a duet. In respect to The Prodigy, which whom they were replacing after Keith Flint’s untimely passing, Papa Roach played a tribute in the form of The Prodigy’s hit single “Firestarter.”

Disturbed took to the stage in high winds to what was the barest I’ve ever seen their stage setup.

With nothing more than a drumset and microphone stands, David Draiman and the boys from Chicago rolled through hit after hit for more than an hour. Playing songs from over six different albums, including cover songs, they pleased every fan left in the stadium.

Not so much a highlight… as it was a massive painful error in judgment, but Gojira guitarist Christian Andreu got scorched by flames.

Standing on cue, a pyro blast went off just as wind gust through the stadium, causing the flame to hit his face. Walking off stage at the end of the third song, Christian returned to finish the set, splashing water in his face between songs to keep cool.

This could be the reason why Disturbed had no pyro, as per usual, their set is quite insane to see. 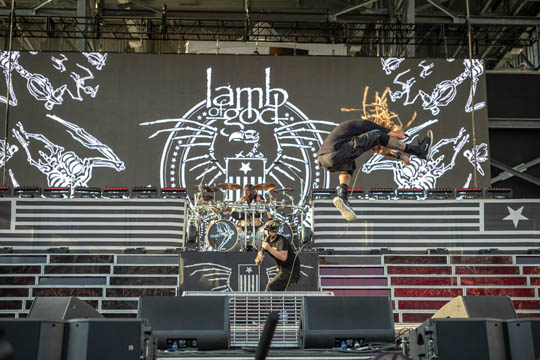 The third and final day of the festival was bad… just bad. Not music-wise, as most of the bands got cancelled due to weather.

Waking up to notifications on Facebook from Sonic Temple telling people to take down tents due to strong winds, and doors being pushed back set the tone for the day.

With the winds picking up, the north-facing Wave Stage was delayed and then cancelled altogether before doors opened to the public. With the main and Echo stage pressing forward, Teenage Wrist began the schedule for what would be a short-lived afternoon.

Dirty Honey, Amigo the Devil, Palaye Royale, and Yungblud put on phenomenal shows, but it was The Struts that brought the party back to the saddened crowd.

Lead singer Luke Spiller wasted no time in calling the crowd out for its lack of enthusiasm and had everyone singing along.

The interrupters played with no backdrop to slow the winds down, and while I’ve never seen them before, their punk-ska vibes had me reminiscing of older groups like Save Ferris and No Doubt.

As their set came to a close… so did the concert. The main stage was evacuated due to strong winds, and then came what we all feared. The evacuation!!

As everyone piled into the parking lot and back to their vehicles, some people left believing the day was shot, while other “re-hydrated” themselves breaking out the corn hole games and party tables.

After hours in the parking lot word came, Joan Jett would play a shortened set, and the Foo Fighters would close out.

Being cancelled, Scars on Broadway, Chevelle and Bring Me The Horizon fans were left in the dark needing to buy tickets when they return to their hometowns.

The Foo Fighters hit the main stage, and lead singer Dave Grohl mocked the crowd saying, “You f***ers didn’t think we were gonna play, did you?”

What came next was amazing. Playing for more than two hours, they didn’t let the rain cramp their style. Hitting on every crowd favorite throughout their set, heavily interacting with the audience and poking fun at a fan who was hoping they would be done sooner, the Foo Fighters didn’t disappoint.

With all the bad that happened on this day, having Foo Fighters close out the weekend with the level of energy they presented was a great idea.

Dave Grohl bringing The Struts lead singer Luke Spiller out on stage to sing Queen’s “Under Pressure” while he took a seat on the throne behind the drum kit to show he still had it after all these years!

While the weekend wasn’t perfect, more due to weather in May in Ohio, the first annual Sonic Temple Art & Music Festival showed us “Rangers” that there is still life after Rock on the Range. I, for one, am intrigued to see what they come up with for year two. 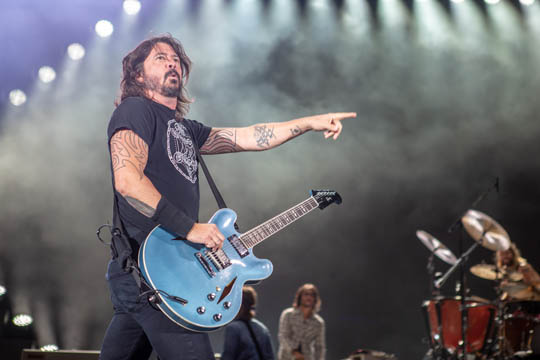