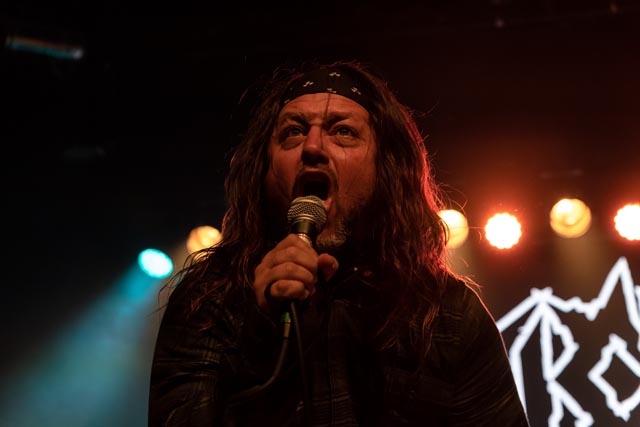 On Tuesday, November 16th, fans flooded to the Warsaw concert venue in Brooklyn, NY, for an evening of friendly thrashing. With a stacked bill that saw Dead Heat, Skeletal Remains, Crowbar, and Municipal Waste all under the same roof, the certainty for chaos was imminent.

All the elements were present that night. The evening started with nardcore (hardcore crossover thrash) band out of Oxnard, CA. Dead Heat, and no, not the heavy metal band Dead Heat. They say first impressions are everything, and this would be my first encounter with Dead Heat. These dudes exploded right out the gate with sick-ass guitar riffs, sheer power, and intensity that reminded me of my impression of witnessing Power Trip live. Unfortunately, Warsaw doesn’t have a deep stage, so with the other band’s equipment setup, there doesn’t leave room to move about, and you could tell from the energy this band possesses it is clear these guys go off when they have the space. I was so focused on watching these guys play one thing I didn’t notice was how lively the pit was.

There was something I did notice when Dead Heat took the stage. The venue looked a little empty, with many concertgoers nowhere to be found. They were either lingering around the bar or just not even at the show yet. The show did start a bit early, and it was a Tuesday, but it wasn’t that early, pretty standard as of late if you ask me. I don’t get these New York crowds sometimes. When did it become cool to show up fashionably late to a metal show and miss half of the bands, shit that’s how you get to see how good a band really is. A band may sound good in your headphones, but can they put on a kick-ass live show? For those of you who may have missed Dead Heat, you missed out on something good. I truly look forward to the next time these guys pass through New York. 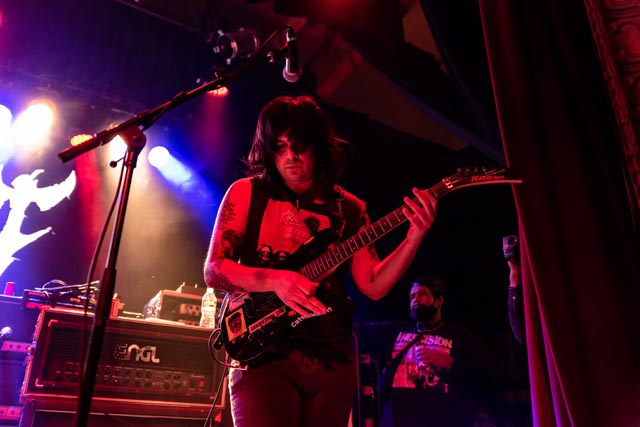 It was time for a bit of death. The death metal quartet Skeletal Remains would take the stage next. For the lineup of bands that night, it would seem that Skeletal Remains would be the odd man out even with the band’s popularity, however not the case. Upon the band’s arrival on stage, it was clear they were a heavy crowd favorite that night from the amount of applause that erupted from the fans. It was also clear that the crowd had finally thickened up. As for the stage performance, Skeletal Remains did not stop for one second once they started through their 30-minute setlist. Visually it was typical for a death metal band with heavy red lighting and lots of smoke. So much smoke, almost to the point the band just about appeared as dark silhouettes, which emphasizes the group’s brutal sound and lyrical content of death, violence, and gore.

During the first few songs of the band’s set, there was a bit of a tech issue with one of the two smoke machines set up right at the front edge of the stage not working. It didn’t hinder the band’s brutal assault; if anything, it gave fans a bit more visibility of the members on stage. Once fixed, the smoke machine continued to blast into the air, so much that after Skeletal Remains finished their set, it had seemed as if there was a fire in the building. I honestly can say I have never witnessed that much smoke lingering in a building of that size after a set. 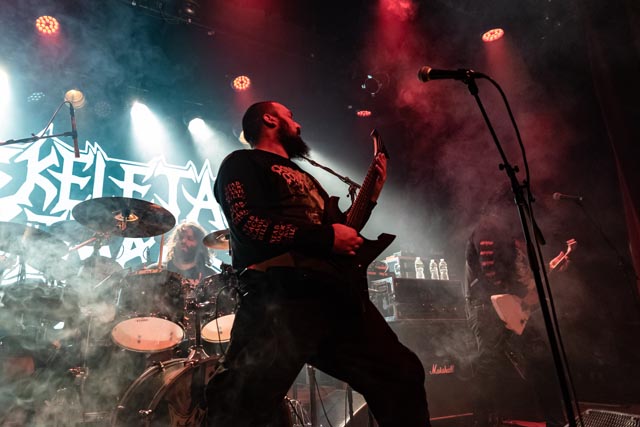 Once the smoke cleared, doom set in, not in the bad sense but the good kind. Doom metal from New Orleans, yes Crowbar, the main support act of the night, took to a slightly hazy stage of smoke that lingered from the prior set. Vocalist/guitarist Kirk Windstein held his arms up as he motioned for those in the crowd hanging toward the back to come forward. Windstein would acknowledge Brooklyn with a greeting of we are Crowbar from New Orleans, and this is “High Rate Extinction.” With 30 years under their belt, the veteran act didn’t miss a step. Windstein’s vocals and rhythm guitar playing flowed flawlessly through their 45- minute set right along with Matt Brunson’s leads and the rhythm section of drummer Tommy Buckley. Bassist Shane Wesley who joined the band after the retirement of founding member Todd Strange in 2018, holds down his part on bass like a veteran himself. Through the set, Windstein made a joke about the band not putting anything new out since 2016’s The Serpent Only Lies, which in fact, would not see any of those tracks on the setlist. Fans didn’t get anything off the band’s debut album Obedience Thru Suffering, either. Not to say the set was bad, the nine-song set did include some heavy fan favs, and there wasn’t any letdown whatsoever. 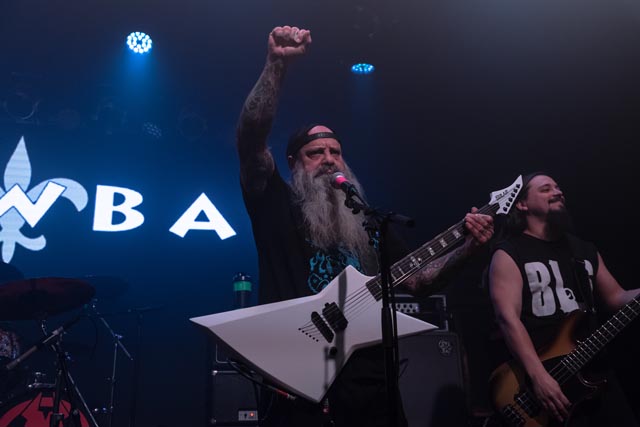 It was officially party time!!!! Virginia thrashers Municipal Waste were getting ready to the stage and bringing their partying thrash style to close out the night. First, if you have never been to a Municipal Waste show, you are missing out on true friendly chaos. Second, if it’s your first Municipal Waste show and you got yourself front row at the barriers, you most likely will unintentionally get knocked in the head by someone’s body part, but hey, it’s all in the fun of the show. Before the band made their way out on stage, chants of “Municipal Waste… Is Gonna Fuck You Up” over and over by fans could be heard loud and clear throughout the venue, which would continue throughout the entire set well. With that being said, as someone who has seen Municipal Waste live numerous times, I knew this crowd was ready to set it off. As the intro of “Deathripper” played, and members of Municipal Waste made their way out to the front of the stage, fans at Warsaw erupted.

Before the band went into the first song, vocalist Tony “Tbuzz” Foresta commented, “the last show we just played, those guys sucked, and we’re in New York, and I know you guys don’t, so lets see that circle pit.” Foresta’s demand ignited the fire in the crowd even more than it already was as they blasted right into “Breathe Grease.” That was it! The first song was underway, and bodies immediately came flying over the barriers.

A quick funny note, before the band took the stage, the lead security guy in the pit came over to us photographers. He asked if we had ever seen Municipal Waste live, which I had, so I knew exactly where he was going with the question. He had asked only to warn us about watching our backs because, as I said earlier, shit gets nuts, and it did non-stop.

As always, Municipal Waste threw down a great set. With guitarist Ryan Waste and Nick Poulos putting on a show for the fans feeding off of each other’s energy with dealing solos and smashing riffs, while the hyperactive ball of energy Tbuzz thrashed around on stage and cracked jokes every chance he got in-between song introductions. Bassist Phil “Land Phil” Hall and drummer Dave Witte don’t play a small role in the hard-hitting, fast-paced rhythm section. At a Municipal Waste show, Tbuzz always reminds the crowd to keep that circle pit going, and the crowd never holds back on that either. It’s a no holds barred whirlwind of chaos. In October, it was said in an interview that Municipal Waste had finished recording their next album, which is due in 2022 and midway through the band’s set, fans were treated to a brand new track titled “Gravedive.” When it came time for “Wave of Death,” Tbuzz called out to the crowd to form a wall of death on each side of the pit, and of course, fans were happy to oblige the request, and just like the entire set so far it was chaos. Literally, through the band’s 18 song set, bodies could be seen flying from every angle on top of the crowd and over the barriers. You truly have to give it up to the security that worked the pit because they had more then their hands full.

On this evening, fans weren’t only gifted a brand new track in the set but near the end of the set were also treated to the first time ever played live and classic “Lunch Hall Food Brawl” of 2007 classic, my favorite, The Art of Partying. Now when I say it was the first time playing live, I don’t mean it was on their set throughout the tour. It was the first and only time. The band would go on to end their set with “Born to Party” before returning to the stage for their encore as the chants of “Municipal Waste…Is Gonna Fuck You Up” continued. The encore began with “Wolves of Chernobyl,” and the night would properly end with the classic “The Art of Partying.” Mark it down another great chaos-filled night of partying with the Virginian thrashers. Municipal Waste is in the books. I can’t wait till the next at the end of every Municipal Waste show. I also can’t wait for the new album to drop as well. Cheers to the Waste!!!!

03) The Thrashin’ of the Christ 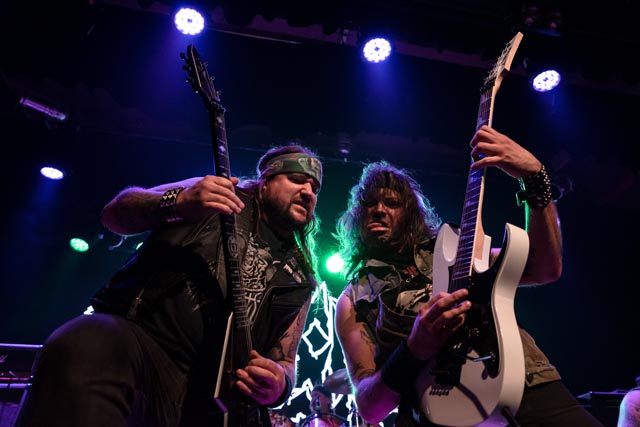 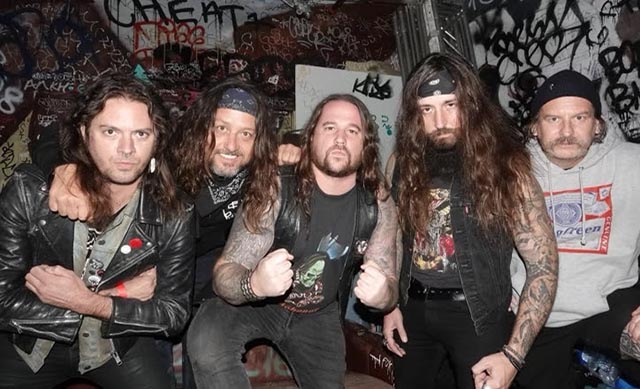