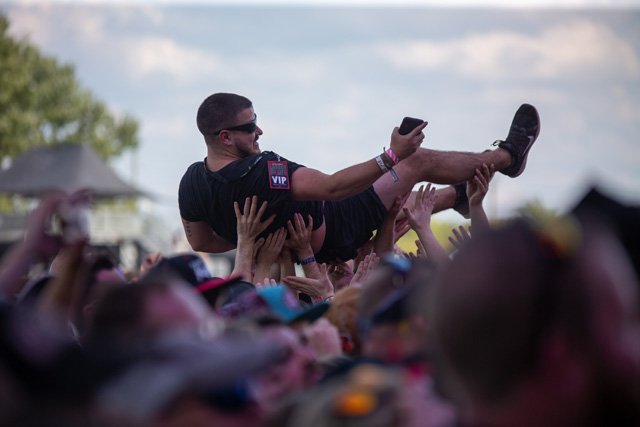 Last year’s Louder Than Life festival was canceled due to flooding, which the fest ultimately lost their location at Champions Park. Our hopes were high in the DWP camp that the Highlands at Kentucky Expo Center would live up to the hype for this year’s 5th edition on September 27th through September 29th.

Walking in on Friday, fans seemed energetic as critiques about the changed location were overheard. Overall the new venue appeared larger in square footage and more squared-off than the previously long shape of Champions Park. The heat was almost unbearable, and the lack of trees made the shade a hot commodity. (Pun intended!)

Finnish rockers Santa Cruz welcomed the early concert-goers by opening the Loudmouth Stage. Party starters Wilson came out swinging as usual and stepped it up a notch. Ash Costello of New Years Day instigated a waterfall of crowd surfing early. She not only asked the crowd to surf up to shake her hand but told security to let them through.

Philip H. Anselmo & The Illegals tossed caution to the wind and played a nearly complete Pantera setlist taking fans back in time. Motionless In White, Beartooth and I Prevail all played phenomenal sets. Closing out the side stage (because no one would dare play after them) was blood shocking GWAR. Fans lined the front few rows with white shirts and waited for the blood drenching experience.

Chevelle hit the stage during the early evening. The group performed a barrage of hits, including “Send the Pain Below,” “The Red,” and “Hats Off to the Bull.” A Day To Remember brought the crowd back to life, with party hits spanning through their entire catalogue while having the crowd singing along throughout.

The moment that everyone was waiting for on Friday evening was the long-awaited return of Staind. After a 5-year hiatus, Aaron Lewis and the guys walked out on stage. After a light puff on a cigarette, Lewis tossed it to the side as they lead into “Eyes Wide Open.” It was as though they never took a hiatus. Fire shot up instantly as it continued to escalate during their 2-song set. By the time they reached hit song “It’s Been Awhile” and closer “Mudshovel,” everything was on fire. Stage props and even their banners had to be put out with fire extinguishers. It was as though they took the phrase “burn the set to the ground,” literally.

Thinking that would be hard to top, the behemoth that is known as Slipknot closed the night with their new stage setup, new masks, and outfits. Wasting no time, they started with the fan-favorite “People=Shit” and didn’t look back. Through their hour and a half long set, they played a variety of songs from their entire catalog including their latest effort, We Are Not Your Kind with songs “Unsainted,” “Before I Forget,” and “Solway Firth.”

Highlight of the day

It’s a mix between watching newcomers see GWAR for the first time, mainly because there were people who had NO CLUE what was going to transpire. Anyone who follows the band knows they hold nothing back, everything from chopping heads off presidents, to giving abortions on stage is on the table for them.

The second highlight would be watching Staind return to the stage. I was lucky enough to see them years ago at another DWP festival, and this just seemed different to me. I’m not sure if they had something to prove, or they wanted to burn the place to the ground literally. However, everything from the lighting and pyro to the music was perfect. 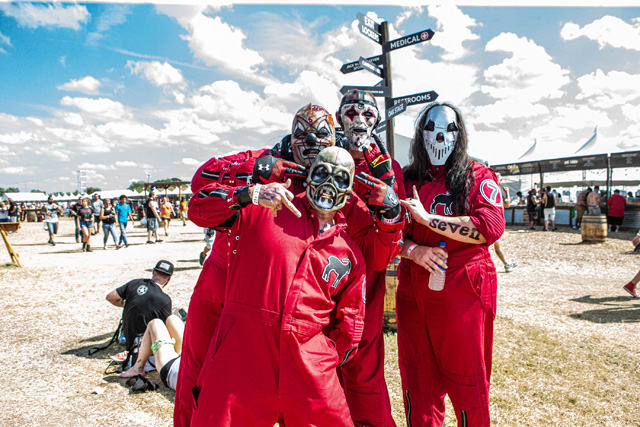 Amigo The Devil opened the second day to a smaller crowd, probably due to the heat mixed with the level of alcohol intake from the night prior. Bands like The Pink Slips, Like A Storm, and Dirty Honey had a bigger audience as the crowd trickled on as the day continued. By the time Badflower hit the stage around 2:30 pm, the festival-goers were in full force once again.

Suicidal Tendencies, for their age, have some of the highest energy levels I have EVER seen. Every time I see them, their levels are the same, and they show no sign of slowing down. Asking for circle pits and crowd surfers, they pumped life into the audience and started the moshing early. Stone Temple Pilots followed with a greatest hits melody that saw lead singer Jeff Gutt jump into the pit and interact heavily with the crowd.

Dropkick Murphys brought Boston to Louisville! In true Irish fashion, bagpipes, and banjos aplenty. The party started with “Cadence to Arms” and ended 13 songs later with the hit single “I’m Shipping Up To Boston.” Lzzy Hale and the rest of Halestorm were given less than an hour, wailed through the top 9 songs of their discography, which essentially turned into one massive sing-a-long.

While some people considered it out of place, the mainstage held none other than Ice Cube. For over an hour, He took the crowd a trip down memory lane singing songs from his early days in N.W.A. Ice Cube also made room for his solo hits.

Bestowed upon Godsmack this evening was the honor to act as direct support for the one and only Guns N’ Roses. Sully Erna and the boys from Boston played an hour hitting songs from six different albums, but leaving one staple out. For the first time in all the times I’ve seen them, “Voodoo” was omitted. However, the extended drum battle between Sully and Shannon still happened.

Flying into the venue in a helicopter, and only 45 minutes late, Guns N’ Roses stayed true to their word and played for over three hours. A 24 song setlist and a 4-song encore spanning through their entire catalog, and covers such as Soundgarden’s “Black Hole Sun,” Pink Floyd’s “Wish You Were Here” and The Who’s “The Seeker.”

Oddity of the day

You would think, paying a flat rate for a three-day pass, and being able to see Gun N’ Roses for more than three hours for LESS than they charge normally for a ticket people would have watched more. In what seemed like a planned exit, after the fourth song, “Welcome To The Jungle,” you could visibly see a mass exit happening. For me, as a fan growing up with G.N.R., it was saddening to see. 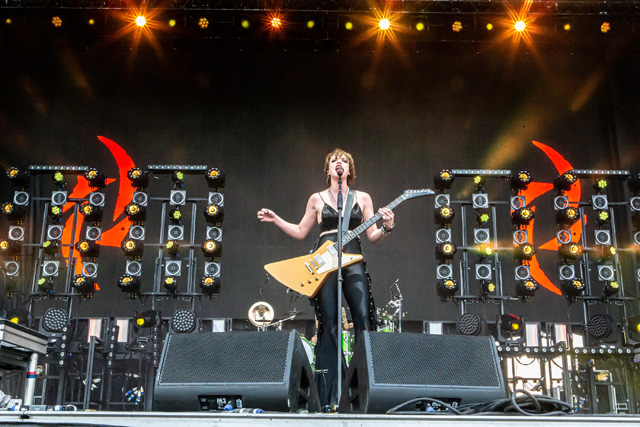 The weather finally cooled down a bit, which made walking a lot nicer. Although a bit sore from the first two sweltering days, I was excited to see most of the bands on the bill.

Fire From The Gods gained a lot more fans as the buzz around after their set was completely positive. Taking me back to high school and Warped Tour memories, punk rock band Sum 41 played hits that made everyone sing. Including one song off from their newest album, they gave the crowd a taste of something new, mixed in with all that nostalgia.

Demon Hunter incited heavy moshing, while Three Days Grace brought “Riot” to life when asking the crowd to participate. In This Moment experienced technical difficulties, which caused a 15-minute delay at the start of their set. Unfortunately, this gave Maria less time to change costumes as the band was only able to perform five songs in total.

Breaking Benjamin played a mix of hits. There was an impressive amount of fans singing along, allowing lead singer Benjamin Burnley to take a few breaks taking it all in.

Marilyn Manson brought heavy smoke and an amazing light show that worked well with the fog to create shadows and gave an overall high sensory overload. Manson eventually made his way to the crowd giving high fives and taking selfies with fans. Rob Zombie was direct support of the final evening and brought a multi-layered stage set up. There were full digital L.E.D. boards, playing in perfect sync to his music. Moments came when he tossed a giant beach ball out to the audience, and an all-out party ensued.

Disturbed officially closed out 2019’s Louder Than Life Fest. The quartet from Chicago is known for over the top sets, including straight jackets and more pyro than at a July 4th fireworks display. However, on this evening, they walked onto a bare stage, with nothing more than a digital backdrop, and a drum set. After seeing Rob Zombie’s performance, this seemed a bit lacking in imagery but was made up in sheer performance quality. The music and vocals were in perfect sync, and it was just a pure and straightforward rock show. As much as I like to have my face melted off (like with Staind on Friday), sometimes just pure un-interrupted rock is a good thing.

Gaining the “Largest Rock Festival in America” title this year with over 128,000 fans in attendance over the course of three days, D.W.P. set the bar extremely high with this year’s edition of Louder Than Life. The only speculation over-shadowed this festival as handouts were given while exiting the venue with a teaser for 2020.

Announced on October 10th, Metallica will not only be headlining Louder Than Life, and playing two separate sets, but will headline EVERY DWP festival in 2020.

To stay up to date with changes, and further announcements, head over to the official website. 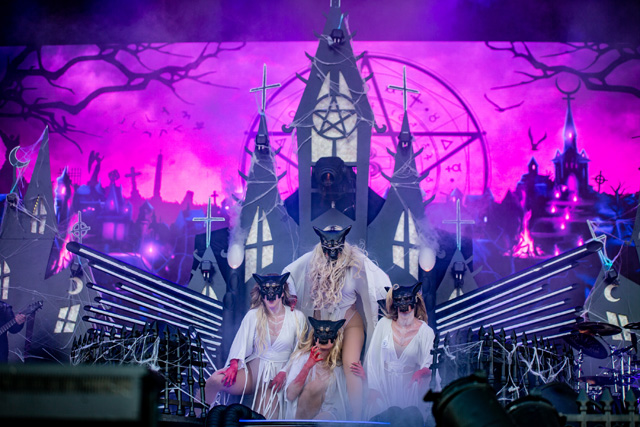