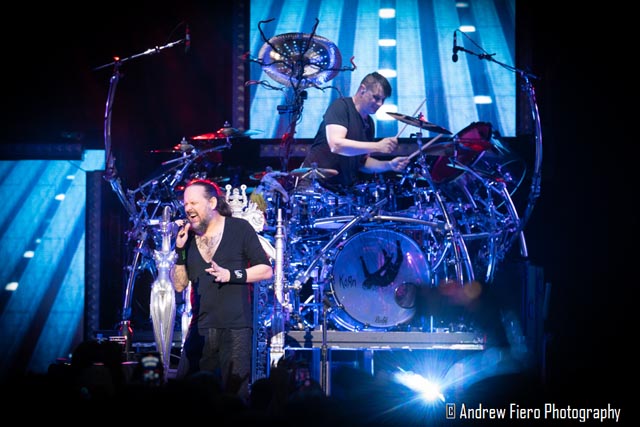 Back when KoRn and Staind first announced their 2021 Summer Tour in early May, the thought of going to a live show was new to fans. Many had spent over a year in various stages of lockdown due to the ongoing COVID-19 pandemic. As spring turned to summer, signs seemed to be pointing in the right direction; virus vaccinations were on the rise, and normalcy appeared to be returning. The combination of KoRn and Staind, alongside opening acts Fire From the Gods and ’68, was perfect on paper. The two headliners were no strangers to touring with one another, with both bands iconic in their rights. The tour started on the right foot in West Palm, Florida, on August 5th and had fans banging heads all up the East Coast.

Then fans received the painful reminder that Covid was still a threat. Mere hours before the band was set to take over The Pavilion at Montage Mountain in Scranton, Pennsylvania, the show was forced into being canceled as KoRn announced a positive Covid case within their ranks. It soon later came to light that it was none other than lead singer Jonathan Davis who had been struck with the virus. Along with five others, the Pennsylvania date was forced into being rescheduled, pushing the entire tour to end in early October. Sadly due to scheduling conflicts, shows in Darien Center and Syracuse, New York had to be canceled outright. While no fans ever want to lose out on a chance to see their favorite bands, many understood the severity of the situation.

When everything seemed back on track, KoRn was struck with Covid again as guitarist James “Munky” Shaffer became the second member to test positive in early September. Determined to keep the remaining tour dates intact, KoRn pushed on while employing the talent of Love and Death’s J.R. Bareis in Munky’s absence. Munky returned to the lineup on September 18th as the band was starting up a swing through Texas shortly before their makeup dates began to close out the tour. Ten days later, the tour finally made its way to Long Island for a show on the water at Northwell Health Amphitheater at Jones Beach in Wantagh. As the day approached, a new concern entered fans’ minds with attention not on the stage but the sky. The forecast called for thunder and lightning, which had caused cancellations in the past at the venues as metal fans found out in 2018 when Marilyn Manson and Rob Zombie were forced to cancel a show.

Still, with dark grey clouds in the sky, the amphitheater started letting in fans at 6 PM, with Atlanta, Georgia’s ’68 tapped to open the night. With an American Noise, Garage Rock sound, lead vocalist and guitarist Josh Scogin and drummer Michael McClellan proved that less can easily be more with only two band members. The duo psyched up the crowd with covers including “Sabotage” by Beastie Boys and original songs “Bad Bite” and “TRACK 3 g”. The band made it a point to mention how much fun it had been to tour with KoRn, suggesting everyone try it. On the final tour date a few days later, KoRn would surprise McClellan and Scogin during 86’s closing song, covering the band with silly string. With only a short time on stage, an opening act only has so long to show off their tracks and personality; ’68 does both in spades. 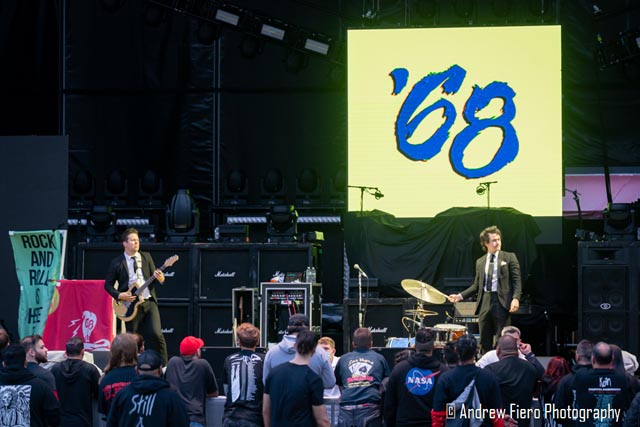 As the day turned to night, the storm clouds that once had been a cause for concern luckily dissipated and, aside from a very brief sprinkling, never caused any real concern for the Long Island fans again. This was a relief as Staind was geared up to play. For Aaron Lewis (Vocals, Guitar), Mike Mushok (guitar), Johnny April (Bass), and Sal Giancerelli (Drums), the show marked the first time the band graced a New York stage since 2014 and the first time performing in N.Y.C. or Long Island since 2011, giving a reason for both fans locally and from the city to come in to check out the band’s return. The band was initially scheduled to make its mark at Jones Beach earlier in the summer before coheadliners Disturbed decided to cancel their announced tour due to the ongoing pandemic. Still, with Covid having caused enough chaos since their 2019 return, the band was ready and willing to finally wow the Long Island crowd.

The foursome wasted no time kicking things into high gear with “Eyes Wide Open” opening their set. Lewis had been making the news leading up to the show with his very outspoken political beliefs but, outfit aside, chose to stick to the hits on this night. Speaking of, “Open Your Eyes” and “Fade” were among the opening tracks on the band’s agenda. Mushok could be seen the entire set banging his head. At the same time, Lewis took a more conservative approach, focusing on putting his energy into singing every lyric in a heartfelt and genuine manner. “Raw” had fans of Staind’s harder tracks moving before the band slowed it down with “Right Here.”

The rollercoaster ride continued with the high of “Crawl” before the band brought it down once more with “Outside,” Lewis encouraging the crowd to sing along with the iconic chorus. “Paper Wings” and “So Far Away” followed suit, each offering fans more chances to sing along with a band that many hadn’t had a chance to see live in a decade. Truer words were never spoken when Lewis spoke the opening line of fan-favorite “It’s Been Awhile.” Fans lent their support to the track, the place nearly filling as the set had progressed. “Mudshovel” would get the nod to close the set.

Whether you agree or disagree with his beliefs, Lewis is undeniably an incredible vocalist. The band’s return to form in 2019 has proven he and the group have more to offer their fans. According to Lewis, Staind has new music in the works, and it will be interesting to see what this new chapter brings to the band. Hopefully, the group will focus on a new album while they take some time before hitting Daytona, Florida, for Welcome to Rockville. 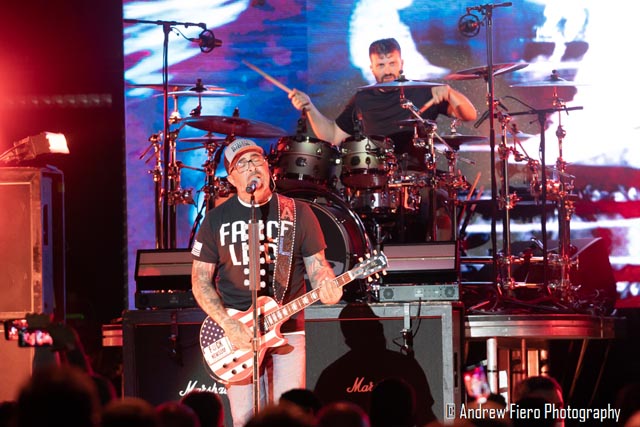 After much anticipation, the lights went down, and KoRn prepared to take the stage. With nothing but fans’ cell phones lighting the stage, “The Seduction of Indulgence” blasting its way through the speakers around the venue. Davis, Munky, Brian “Head” Welch (guitar), Ray Luzier (drums) were all familiar with the Jones Beach stage, having performed there last with Alice in Chains in 2019. Due to Reginald “Fieldy” Arvizu taking a hiatus to deal with personal issues, Suicidal Tendencies’ Ra Diaz provided his talents on bass for the entirety of the summer tour. It was time for the nu-metal giants to have their turn.

The fans roared with excitement as the first guitar notes blared and hits on the high hat came through the speakers as “Insane” began. Lights shined over a silver throne on the stage, which Davis would occasionally sit upon while he sang and surveyed the crowd. The iconic H.R. Giger-designed microphone stand that has become a staple of Korn’s live shows for two decades resided center stage in front of the throne. Fan favorites “Falling Away From Me” and “Here To Stay” were followed by a few newer tracks, including “Victimized” and “Cold.” Between tracks, Davis pumped up the crowd, talking about the band’s struggles over the tour before joking, “So it better not rain tonight.” The sound of bagpipes soon filled the air as Davis came out playing the intro to “Shoots and Ladders” that closed with a snippet of Metallica’s “One” thrown in for good measure.

Following “Clown,” Diaz and Luzier each got a chance to shine with solos leading into “You’ll Never Find Me.” KoRn would add another tribute during “Coming Undone,” giving the song something extra with a sampling of Queen’s “We Will Rock You.” After “Can You Hear Me,” the band closed their main set with the mainstay track “Freak On a Leash,” with fans giving an emphatic response to every word. Craving more, the crowd’s electricity built for the oncoming encore. Serving up a considerable portion, KoRn soon gathered back on stage to treat fans. The encore began with a medley of “It’s On,” “Trash,” and “Did My Time.” The encore seemed dedicated to the long-time Korn fans with classic tracks “Twist,” “A.D.I.D.A.S.,” and “Blind” closing out the night. As “Blind” came to an end, Davis thanked the Long Island crowd, promising to play again there real soon while the band’s logo lit up bright.

The return of live music has been a bitter-sweet celebration for fans. While many have embraced the return, it has undoubtedly come with reminders that we are not over this pandemic yet. Covid may have slowed down the summer tour for KoRn, but the band couldn’t be stopped in the end. While Darien Center and Syracuse New York both may have sadly gotten the short end of the stick due to cancellations, the band’s tour overall was full of memory-making moments and a reminder that KoRn and Staind are both still going strong decades after the first burst onto the scene. For KoRn, the end of the tour gives the bands a few weeks to catch up with family and friends before a short burst of shows headlined by System of a Down takes place along the West Coast later in October. 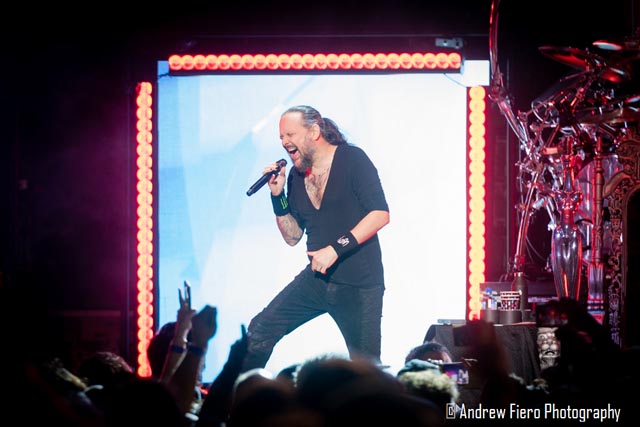