With darkness having invaded the sky, and Mother Nature playing a little nicer than the previous night in terms of temperature, the final two side stage performances remained. On the Hell Stage, fans were delighted by progressive rock stars Coheed and Cambria, while fans looking for something a bit more sinister decided to check out Ministry on the Rise Above Stage. Chicago’s industrial metal pioneers are led by vocalist Al Jourgensen’s. While the rest of the band has been a bit of a revolving door, the rest of the current lineup includes John Bechdel (keyboard), Sin Quirin (guitar) Cesar Soto (guitar), Paul D’Amour (bass) and Derek Abrams (drums). Ministry has continued to power forward at the forefront of the Industrial scene. The lights stayed low and the bass was turned high as the band kickstarted the set with “The Missing”. Dressed in an out-of-this-world attire, Jourgensen led the group next through “Deity” while the lights strobed.

Soon after, “Stigmata” and “Jesus Built My Hotrod” before paying tribute to Black Sabbath with a cover of “Supernaut.” Shattering through tracks “Just One Fix” and “Burning Inside,” the crowd ate up everything the band had on offer. “So What” marked the end set, and the finale for the Rise Above Stage while Coheed and Cambria said their goodbyes over on the Hell Stage. Ministry continued to tour heavily after Exit 111, wrapping up their 2019 in support of Slayer’s farewell tour. Only three tour dates are currently posted for the group, taking place in “The Land Down Under,” Australia with shows alongside the Deftones, Clutch, Testament, and others. 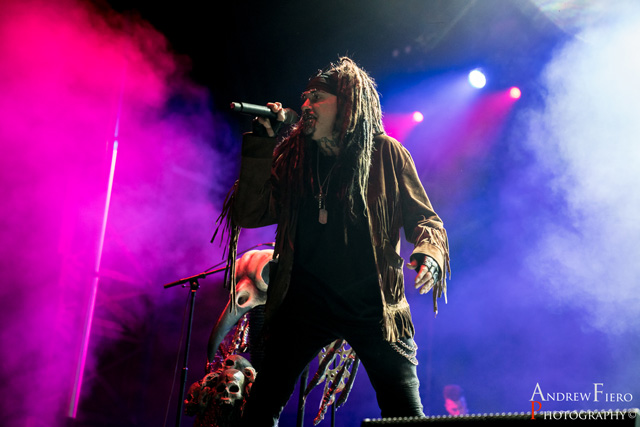 With that, only one act remained for the inaugural year of the Exit 111 festival. For twenty years from 1996 to 2016, the thought of Guns N’ Roses appearing together featuring the proper lineup up Axl Rose (vocals), Duff McKagan (bass), and of course, Slash (guitar) was unfathomable. Years of in-fighting had caused egos to get the best of the group. While Rose continued to perform under the Guns n’ Roses name, the departure of members had left a lot to be desired from what remained of the once prominent band. Lackluster reviews of Chinese Democracy did nothing to sway public opinion that the band behind huge hits, including “Welcome to the Jungle” and “Sweet Child O’ Mine,” was a shell of its former self. And then it happened. After a few years of rumors and speculation, Guns N’ Roses announced the return of Slash and McKagan to the group, with a 2016 Coachella headlining appearance highlighting the return. Joining the three original members of the group were longtime mainstays Dizzy Reed (keyboard), Richard Fortus (guitar), Frank Ferrer (drums), and newest member Mellissa Reese (synthesizers). The tour’s name, Not In This Lifetime… Tour, paid tribute to Rose’s 2012 comments when asking if the band would ever reunite. As time went on, the tour continued to build steam and legitimacy with appearances around the world. And on this day, that tour found them in Manchester, Tennessee, in front of a rabid crowd.

While much has changed for the group, a lot has stayed the same, as fans found out when the scheduled start time of 8:10 PM came and passed. Keeping fans waiting and building excitement, a video played in loop featuring a devilish hellscape with someone on a motorcycle played on repeat until the video brought fans on a literal roller-coaster ride to introduce the group around 8:35 PM. Fireworks started the set with a bang as the band opened with “It’s So Easy” and “Mr. Brownstone” before proving that “Chinese Democracy” deserved a bit of praise. Major hit “Welcome to the Jungle” had fans singing loudly along with the classic track. The group built on the setlist with tracks including “Double Talkin’ Jive” and “Estranged before kicking into a pair of covers with “Live and Let Die” of Wings fame and Velvet Revolver’s “Slither” paying tribute to another of Slash’s successful projects. “Rocket Queen” soon followed with Slash and Fortus given time to show their chops on guitars during a jam session. The Misfits and Jimmy Webb would later have songs taken over by Guns N’ Roses as “Attitude” and “Wichita Lineman” were brought into the spotlight.

Seventeen tracks into an epic setlist, another mammoth hit in “Sweet Child O’ Mine” delighted fans before the group slowed it down with “November Rain.” The band kept the more intimate feel by paying tribute to fallen rocker Chris Cornell with a cover of Soundgarden’s “Black Hole Sun,” following it up with a fitting cover of Bob Dylan’s “Knockin’ On Heaven’s Door.” The main set officially came to an end with “Nightrain,” but fans wanted more and knew that it was on its way. Shortly before 11 PM, Guns N’ Roses returned to the stage, delivering the final few tracks of Exit 111’s legacy with “Don’t Cry,” a cover of The Who’s “The Seeker” and of course “Paradise City.” As the group broke the song down with Rose’s fans cheered as loud as they had all weekend, as alive as they had ever been. 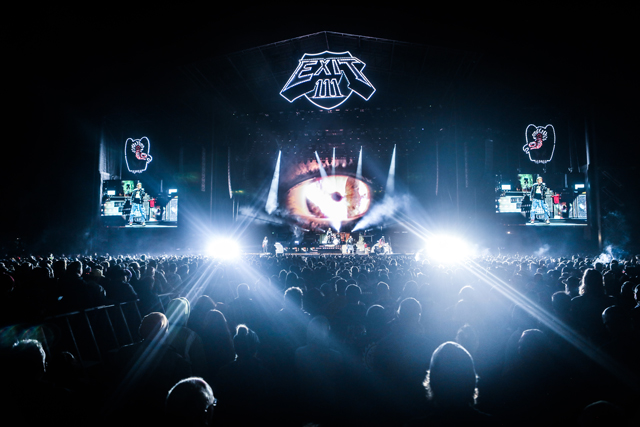 What was once thought of as impossible and then could have easily been written off as a quick one-and-done reunion tour has become so much more for the legendary band. Time will tell if the group can continue to build on what can easily be described as a successful second coming, but right now, Guns N’ Roses fans can expect nothing from the best from a live show featuring the rock giants.

All good times must come to an end, and unfortunately, as the lights turned down on the Heaven stage, Exit 111’s time to shine faded with it. Sadly, with the recent announcement that 2020 will not see the return of Exit 111, it seems rock and metal fans will have to look elsewhere for their festival kick come October. Still, as a one and done, Exit 111 will live in infamy for its great atmosphere, awesome side attractions, and, of course, stellar lineup.