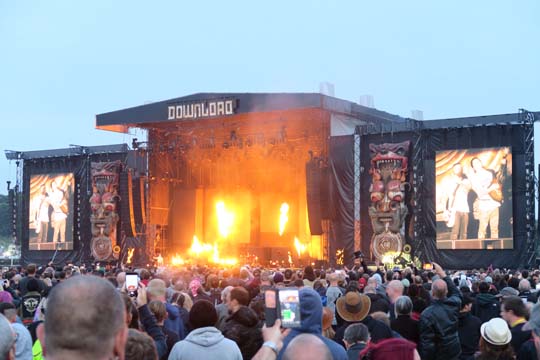 As the Download festival at Donington Park concluded this past weekend, it proved to be one of their biggest and best years yet. Featuring headliners of Avenged Sevenfold, Guns n’ Roses, and Ozzy Osbourne, only proved there were no shortage of great bands on the bill. Many acts did overlap or had conflicting time slots but aside from that, there were many amazing performances.

Friday had great sets from Bad Religion, Jonathan Davis, Nothing More, Andrew WK, Bullet For My Valentine, CKY, Miss May I, and The Marmozets. Barney from Napalm Death joined Volbeat on the main stage for a performance of “Evelyn,” then had a crushing set as they headlined one of the smaller stages later that evening. The main stage was headlined by Avenged Sevenfold, as they thanked England for being one of the first countries to truly embrace their music and dedicated their set to the memory of Anthony Bourdain who had passed away earlier that day.

Saturday had packed crowds for Parkway Drive, L7, Black Stone Cherry, Thunder, Thy Art is Murder. But, the biggest crowd of the weekend was easily Guns n Roses that evening. Gn’R played for over three hours, and were supposable paid Five million dollars for their performance. It was the standard three plus hour set that GnR has been playing since their recent semi-reunion. Two notable additions to the set were a cover of Velvet Revolver’s “Slither,” and their newly unearthed track “Shadow of Your Love.” 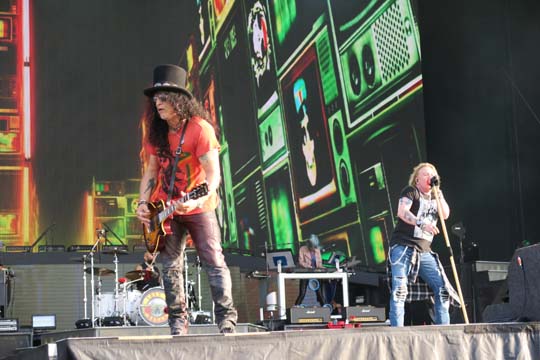 One of Sunday’s most impressive acts was Greta Van Fleet. They had a performance to prove that the recent world wide buzz has been well deserved. They also managed to bring in a rather large crowd at 11:45 a.m. After spending a Saturday night with Guns, getting that many campers up and out of their tents that early was an impressive achievement in its self.

In addition to Greta, the second stage has some of the best acts of the day. Kreator made their Download festival debut with a performance and production packed with pyro and was powerful enough to headline a main stage status. Body Count had one of the most adorable special guests for “Talk Shit, Get Shot,” as Ice-T’s two-year-old daughter joined him on stage. Then followed by Jamey Jasta joining them for “Cop Killer.” Additional stellar performances throughout the day came from Baroness, Myrkur, Meshuggah, Dead Cross, Hatebreed, Rise Against, Shinedown, and Cradle of Filth.

Marilyn Manson co-headlined the main stage, but spent most of the time incoherently rambling, screaming and complaining about the sun. There was also a die-hard fan that managed to get on stage and made an embarrassing and cringe worthy awkward moment. Needless to say, Manson did not look happy.

Ozzy Osbourne headlined the final night as part of his No More Tours 2. While Black Sabbath had performed at Download a few times in the past, this was Ozzy’s first solo appearance as well as his last UK festival performance. Opening with “Bark at the Moon,” Ozzy was in top shape and sounded as good as ever. While it was a traditional hit filled set, there was a surprising addition of “Shot In The Dark.” Zakk Wydle came down to the crowd to play a very extended “War Pigs” solo along with a medley of Ozzy hits.

Download festival is a truly unique event that carries a strong family and friendly vibe, allowing music fans of all ages to come together and enjoy some of the best Rock n Roll, Heavy Metal, punk rock, pop rock, around. And in addition to all the great music, WWE’s NXT tent returned again this year. Putting on an early and late show every day, along with several meet and greets with wrestlers. Every show was packed and proved to be a huge success on their third year with Download.

This year Download passed the record of Monsters of Rock now with 16 consecutive years at Donington Park, and brought in over 100,000 fans. Download Festival next year will take place on June 14th,15, 16th, tickets are already on sale. 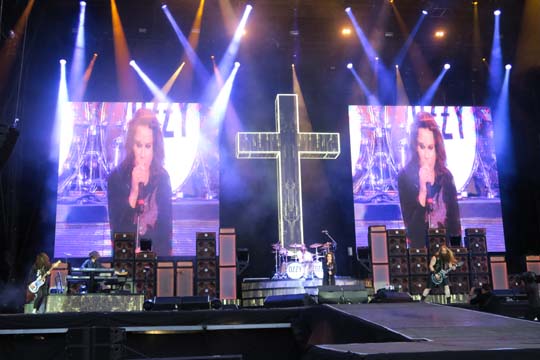