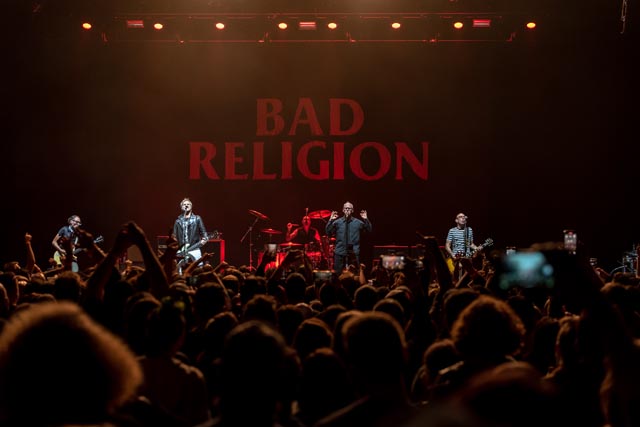 With Halloween right around the corner, New York City was alive and full of energy, with people all set for their weekend of ghoulish shenanigans. On Friday, October 29th, Hammerstein Ballroom was undoubtedly filled with energy, a different type of energy, one with a packhouse of fans ready to go wild for veteran, So Cal punks Bad Religion. Since touring North America in 2019 in support of their 17th studio album Age Of Unreason and with the state the world is in with Covid-19, I was surprised when Bad Religion released a set of full co-headlining dates Alkaline Trio. I have seen Bad Religion a couple of times already, and I would not pass up a chance to see them kill it on stage again. Let’s face it they always deliver bigger and better every time out.

Running behind schedule from an earlier engagement, along with the show’s early set time, I finally made it to the venue and inside just in time to catch the end of Alkaline Trio’s set that ended with a monstrous roar of cheers from fans. At that time, the crowd’s energy was already in high gear, so you knew once Bad Religion hit the stage that the place was going to explode.

Along with the nearly sold-out crowd, I was anxiously waiting for Bad Religion to hit the stage. With the house lights shutting down and the stage dimly lit. As the band began making their way out onto the stage, a thunderous roar of cheers welcomed them. Wasting no time at all, Bad Religion burst right into it with one of my all-time favorites, “New Dark Ages” from their 2007 studio album New Maps of Hell, and that’s when the crowd lost their minds and immediately went ape shit. With a setlist packed with 22 songs spanning their entire career from 1982, there wasn’t much time for chit-chat as they continued to blaze through the set laced with tons of fan favs. As fans crowd surfed, others held their fist up high as they sang along word for word to their favorite hits. Being a big Bad Religion fan, it was hard not to focus solely on crushing it on stage and taking in some of the crowds’ reactions around me. Like me, most of the crowd were truly blown away at the fantastic energy-fueled performance Bad Religion threw down song for song as they closed out their set with the heavy fan fav “American Jesus” from 1993’s Recipe For Hate. Returning to the stage for their encore, it was only fitting to finish things with something from where it all started in 1982, and that would be with “We’re Only Gonna Die” off the band’s first-ever full-length studio album How Could Hell Be Any Worse?

Everything about the show was flawless, from the lighting to the sound. Bad Religion was amazing, they always put on a great show, and the energy from the crowd was just as impressive and made for a complete package.

08) I Want to Conquer the World 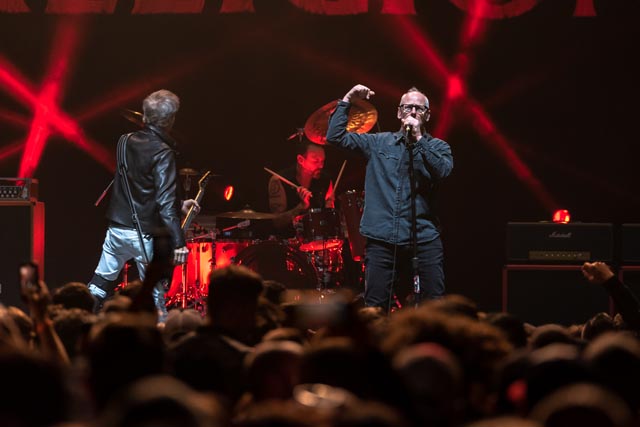