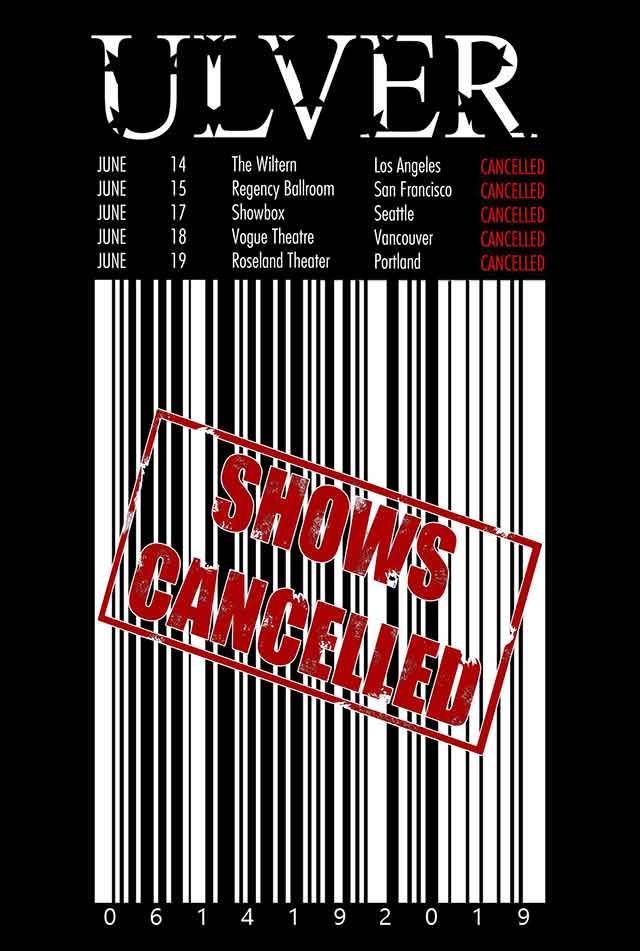 Last year, we were excited when we heard Ulver booked their first-ever U.S performance, which eventually expanded to two packed New York City shows this past March. For those who were lucky to attend, it was an extraordinary evening. After the success of the two NYC performances, the Norwegian experimental outfit announced a West Coast tour. Unfortunately, the group had to make a difficult decision by cancelling their upcoming West Coast trek that was scheduled to kick off next month. The band expressed with brutal honesty, the reason for cancelling is due to poor ticket sales.

“THE SWALLOWING OF PRIDE

We come bearing difficult news: after many frustrating phone calls and deliberations over this last week, we have decided to pull the plug on our upcoming US West Coast run. Modern media protocol suggests we trump up a reason, other than the depressing reality: pre-sales are too modest up against the rather big risk, given the size of the production and the venues.

We feel we just have to be honest about all this. We can not justify going through with all the things we need (flights, nightliner, backline, TM, tech, lasers, lights, and so on) in light of the poor prospects. It has left our promoters, booking agents, management, and now us, a bit baffled. Especially considering two full houses in NYC in March.

Despite our problems getting laser permits for those gigs, we think the trip turned out to be a success, and we would like to take the opportunity to thank everyone who came to the Big Apple. Hopefully it will not be our last visit in the US.

Did we announce too soon after NYC? Should we have announced sooner? Maybe we waited altogether too many years, before finally making it across the pond? One can speculate, of course, but it doesn’t do much good at this point.

We feel it would be irresponsible to ignore the warnings and go over knowing that promoters (and us) will loose thousand upon thousands of dollars. Money is an absolute drag (except when you have it), but also a stone cold reality when it comes down to organizing these things. We have to take it into account, unfortunately.

We would like to apologize to all those who have already purchased tickets and who were looking forward to Ulver America pt. 2. Needless to say, your tickets will be refunded. Please know that this hurts us all. Visas have been obtained, paid and approved for everyone, some flights and other things have already been booked, pre-prod has been done and countless hours have gone into organization. It hurts even more since it is the second time in the US (third in our career) that we feel we have no other option than to cancel.

Finally, and most importantly, because we know many out there will be sorely disappointed: this decision was not made with a light heart.

We are very, very sorry.