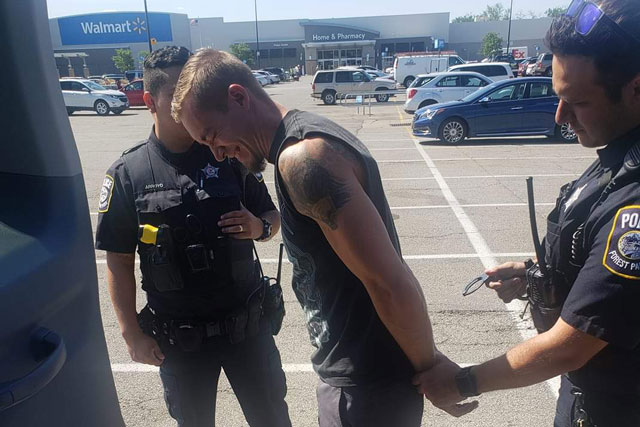 Unfortunately, after a violent/hateful crime, the media tends to implicate entertainment for one’s heinous act. Whether it’s metal, video games, or film, outlets will target against one of them. Many are still shaken up after the two mass shootings that took place in El Paso, Texas, and Dayton, Ohio. And sadly, people have taken advantage of Walmarts by threatening customers with a pellet gun and walking into a Missouri location armed for a “social experiment.”  And sadly, there are more reports including a man walking into a Florida location asking for a gun “that could kill 200 people.” With an incident happening nearly everyday since the El Paso shooting, people are beginning to profile just about anyone.

According to Metalsucks, Kansas City death metal band Torn the Fuck Apart were questioned by several police after being spotted sitting in their touring van at a Forest Park, IL Walmart. The group were finishing up their tour with Atoll and Mortal Torment at Chicago’s Domination Fest where they were hanging out in the Walmart’s parking lot waiting for their drummer to pick up a few items.

“In the morning we had stopped and parked in the back of the Walmart parking lot in Forest Park, IL to stretch out and grab a few things after a night off of tour and enjoying the Chicago Domination Fest. We had been there for about an hour as our drummer was inside the store getting a few things, and about 15 mins after he went in we heard radio dispatch from behind the van and noticed a cop car pull up behind us. Just as quickly we saw three more pull up and surround us.

After a few minutes of answering questions, the cop said that they were there because they had received multiple calls about a dark van with “suspicious characters ” in it. After all IDs were checked they knew that wasn’t the case. The cops were very professional and respectful to us after they realized we were no threat to anyone, and they even took pictures with us as though we were under arrest, and played along with us to tell our drummer we had warrants and were under arrest when he came back to the van.

We don’t blame the cops for doing their jobs; they handled it well. But it was upsetting that we had been profiled for the way a “metalhead” looks. This isn’t something we haven’t encountered before and life goes on. Now we get ready for our last show of the tour Saturday at the Chicago Domination Fest.”

According to Google, the Forest Park, IL Walmart location is a Supercenter. While not all Supercenters allow RV parking, there are locations that do allow people to sleep in the parking lot for at least one night only as the lot is usually under surveillance. There are also multiple websites out there providing advice on how Walmart’s are a great place to stay during lengthy road trips. You may have seen an RV parked in a Supercenter before as they can have tinted windows and appear very dark and suspicious. However, according to the band’s story, their dark van being parked for less than one hour looked questionable due to its “suspicious characters.”