While it seems Testament frontman Chuck Billy is recovering well after testing positive for COVID-19, we’re still unsure about the official status of Death Angel drummer Will Carroll. According to Billy, Carroll is currently on a ventilator in an intensive care unit at a Northern California hospital after testing positive for coronavirus. Unfortunately, several band members and crew members were tested positive during Testament’s European The Bay Strikes Back tour with Exodus and Death Angel. Blabbermouth reports, Billy appeared on Sirius XM’s Trunk Nation yesterday (26th), and provided a little more information on Carroll’s condition:

“Will had to go to the hospital,” Chuck said. “He’s in ICU on a ventilator right now… I believe he was the first one to test positive [for COVID-19], and then myself and a couple of crew guys. And I know Gary and his wife tested; I think they’re still waiting for the results. But a lot of us [experienced] the same feeling — just feeling really tired, body aching, chest tight and short of breath. And we all kind of had the same feeling, so we were just waiting for the first one to get the results back to realize, if it’s the same thing, we probably all might have it. So we’re just waiting on Gary’s [results] now. The other [TESTAMENT] guys — Alex [Skolnick] and Gene [Hoglan] and Eric [Peterson] — all three of those guys feel just fine; they haven’t had any of the symptoms.”

Later, Billy addressed how they are unable to trace the infection back to an individual or source:

“We’ve tried to trace it,” he said. “We were asking questions, and they still don’t have a lot of the answers for it. They don’t know how long the contagious period is. They don’t know when you get it and when you become contagious. We were lucky enough that nobody was really feeling ill on the road. I believe it was right when we were leaving [Europe] to come home — it was that last day, I believe, and maybe just the airport exposure; I’m not sure. Eric went a different way, so he didn’t get sick. So did Gene — he didn’t get sick. And so did Alex — he stayed at another hotel. So the rest of us, maybe when we traveled through the airport, I don’t know if we got ill then. Or maybe we contracted it that [last] night — it’s just hard to say. You can’t really put a finger on it. But we do know that we were feeling fine in Europe. It’s just once we got home, within that 24-hour window, among all three bands, we were all talking to each other and people were feeling ill. So I would think maybe the last couple of days of the tour, maybe we all contracted it somewhere.”

The singer continued to explain how at least a third of the musicians and road crew on the tour had symptoms of COVID-19:

“Everybody is getting tested and still feeling ill… Nobody’s been as sick as, I think, we were, but I would say a third of us, out of all three bands, with the crews and band members, feel sick. Once we get some more results back, I’m sure more people will start talking about it.” 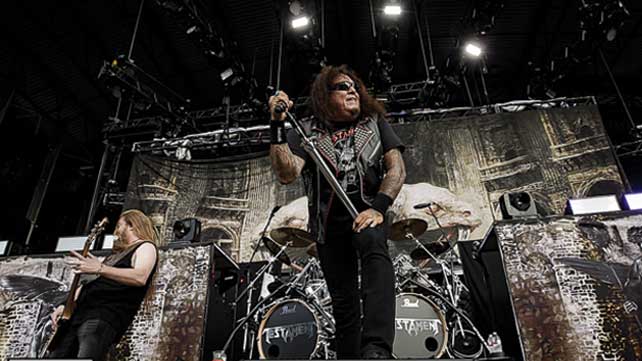