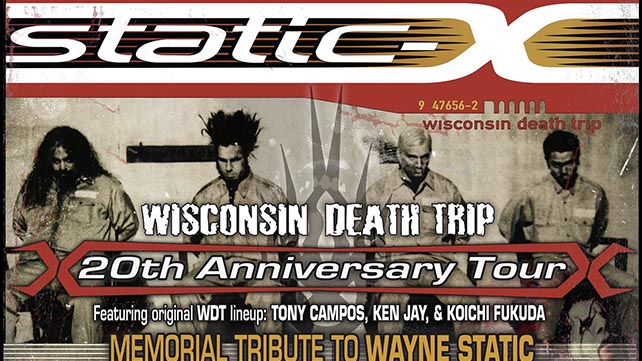 Static-X tour manager Eric Dinkelmann has found the need to set the record straight on the band’s upcoming reunion tour and album. In a post made to his Facebook page, Dinkelmann addresses everything from Wayne Static’s drug habit, the tension it exerted on his relationship with bassist/co-founder Tony Campos, the role Static’s wife, Tera Wray Static, had in keeping the band apart and the real reason for the tour.

The statement comes following a comment made by Emmure frontman Frankie Palmeri, who toured as support for Static-X during one of Wayne Static’s solo outings. During a recent interview on the ‘BREWtally Speaking Podcast,’ he called the upcoming Static-X reunion / memorial tour a “cash grab,” criticizing the band’s intentions given the bad blood between its members.

Dinkelmann starts the post off by stating that Palmeri is unaware of the actual story behind the band’s issues because he wasn’t there to see them.

“Emmure wasn’t even around during the hay day of Static-X. I don’t remember this guy at a single one of our shows and Emmure wasn’t picking up steam till after Tony + Wayne had their split.”

In fact, he says that Palmeri was around for the only “cash grab,” when Static used the band’s name for his solo shows.

From there he goes on to talk about the band’s issues, claiming that the drugs didn’t start until Static’s wife came into the picture.

“No one really goes into the fact that the prescription meds that Wayne was on weren’t Wayne’s. They were Tera’s. Tera got Wayne hooked on medication prescribed to her and ultimately those mixed with booze is what killed my friend.” That’s also when problems within the band started to arise. According to Dinkelmann, Tera would turn the band against the crew for fun. Ultimately, she was also the reason none of the band members were at Static’s memorial show. “The reason none of the original crew or band members were at the memorial was because Tera banned us all from attending. Pretty f***ed up considering how much we shared with a guy we looked at as a brother, but you’re really not going to make a huge fuss about it at the time and be as classless as her.”

Just because there was tension within the band, doesn’t mean that there wasn’t still a sense of brotherly love there. Dinkelmann elaborated,

“When you share years with someone you build bonds. Bonds usually are based on mutual appreciation and love. When those feelings are flipped they generally turn to severe levels of animosity because of how much you cared for that person and your relationship.” He continues, “Everyone gets bitter and angry with those we care deeply for. Sadly we all don’t get to mend those broken fences until it’s too late, but that doesn’t mean that’s the way feelings are left. I think everyone deep down realized that.”

Such is the reason for the reunion tour. Since none of them got to go to Static’s memorial, the band needed some way to honor his memory. Says Dinkelmann,

“None of the actual band members of Static-X got to say goodbye or have any closure. They have every right to do so and I think it’s a great way to celebrate 20 years of Static-X.”

Dinkelmann denies the “cash grab” claims even further, saying that Campos has every right to tour under the Static-X name.

“The fact that Tony is including the original lineup is showing he’s trying to be classy about it. If it was a cash grab he could have easily hired cheaper musicians to pocket as much $ as possible. Instead he’s bringing in all the guys who worked on Static-X as well as guys from other bands and is sharing this with everyone.”

Campos made a similar statement in November 2018 (sans Palmeri chiding). Posted as a comment under the ‘Project Regeneration’ album announcement video on YouTube, he talks about his side of the story and his falling out with Static, but most importantly that he misses his friend.

“I wish that Wayne was here, celebrating 20 years of ‘Wisconsin Death Trip’ with us. I truly believe in my heart, that if Wayne were sober and healthy, and had distanced himself from the negative influences in his life, he’d be doing this with us. I know that Kenny and Koichi feel the same way that I do.” He goes on to say “I am not interested in rehashing the things that divided us. I am only interested in celebrating the things that brought us all together.”

Static-X’s ‘Wisconsin Death Trip 20 Year Anniversary Tour’ kicks off June 18 in Tempe, AZ and runs through July 27 in Las Vegas, NV. The tour will feature original members Campos, drummer Ken Jay and guitarist Koichi Fukuda, as well as special guests set to pay tribute to Static. DevilDriver will be co-headlining (and including some Coal Chamber songs to their set list), though Static-X will routinely have the closing slot.

In addition to the tour, the band will be releasing a new album titled Project Regeneration. The LP will feature Static’s final recordings, as well as new compositions and a handful of special guest musicians. Names being thrown around include Disturbed’s David Draiman, Five Finger Death Punch’s Ivan Moody, Ministry’s Al Jourgensen, DevilDriver’s Dez Fafara, Dope’s Edsel Dope and Fear Factory’s Burton C. Bell. A definitive release date has not been announced yet, though it is rumored to be coming out in spring of 2019.