On March 19th of this year we noticed strange activity during the pre-sale of Metallica’s S&M2 performance for September 6th. As eager Metallica fans were ready to secure their tickets for the iconic show at the brand new Chase Center in San Francisco, CA, resellers such as StubHub snagged thousands of tickets leaving many fifth members in a frenzy while witnessing first hand that they were beat by bots. But how? Well, exactly four months later we have a potential answer as of today (19th), Billboard has issued an extensive report on how these metal legends were engaged in the ticket resale market.

This report stems from an audio of a secretly recorded phone call back in February 2017 just days before Metallica announced their WorldWired North American stadium tour, between Live Nation president of U.S concerts Bob Roux and event promoter Vaughn Millette (now chairman/CEO of Outback Presents), who had been tasked by an associate of the band to sell 88,000 tickets directly on resale sites. The secret conversation involved the two making a deal and figuring out a game plan to make the resales to not look suspicious from the band’s fans. Billboard has also reported that Live Nation officials worked with Metallica’s longtime associate Tony DiCioccio to obtain the tickets to then resell them on the secondary market and splitting the profits made on the tickets.

According to the 11-minute phone call that Billboard has received:

“Ticketmaster will not do it,” Roux can be heard saying on the 11-minute call that Billboard reviewed in full, explaining that the plan to put the tickets on sites billed for resellers had to be concealed. He suggested that “either a Live Nation employee or a venue box office basically take these and sell them into a singular account,” the way tickets are typically allocated to fan clubs or sponsors. Once the tickets were placed there, they would be listed and sold on secondary-market sites.

“When this happens, 4,600 tickets into a single account,” said Roux on the call, “there may be some eyebrows that get raised.”

It’s been reported that Millette was the one who recorded the conversation and later sent it to Live Nation executives and board members.

Metallica’s publicist told Billboard that DiCioccio worked with the band as a “ticketing consultant.” Live Nation informed how they do not “distribute tickets on any platform without an artist’s explicit approval.” However, Billboard addressed how these decisions aren’t always made by the band members themselves.

“But representatives for Metallica told Billboard in June that the band members themselves were not aware at the time that DiCioccio had made a deal with Millette and Live Nation.

Metallica’s longtime managers are Q Prime co-founders Cliff Bernstein and Peter Mensch, but those who have worked with the band said DiCioccio, a former Q Prime manager, is “family” to Metallica, and a publicist for the band told Billboardthat DiCioccio is still employed directly by the group. “If there’s five seats on the jet flying home, it’s the band and Tony,” says a source who has worked with DiCioccio.”

Later Billboard reported how the plan could backfire with angry fans:

“Afterward, Roux entered separate discussions with DiCioccio about the straight-to-resale deal for the North American market, the type of decision Roux has the authority to make without seeking Rapino’s approval on a particular deal, sources said. Such arrangements may be legal but are rarely discussed openly, given concerns about how fans will perceive them, touring executives tell Billboard. Music stars face far more scrutiny over the prices of their seats than do sports teams or airlines because of the emotional connection they spark with their fans.”

The secondary market devious plan stirred up back in 2016 after Metallica’s concert for the opening of U.S. Bank Stadium in Minneapolis, MN:

“According to Live Nation, DiCioccio realized how much money could be made on the resale market after the band’s 2016 concert for the opening of U.S. Bank Stadium in Minneapolis, where over 10,000 tickets were sold “on the secondary market without the band’s participation,” in part because the group initially priced the tickets too low — management was nervous that high-priced tickets would anger fans, according to one of the concert’s promoters.

“After seeing the volume of secondary transactions for that show and the benefit being captured by brokers,” Live Nation said in its statement, “the independent consultant [DiCioccio] worked with Live Nation on a unique distribution strategy that used the secondary market as a sales distribution channel for select high-end tickets.”

A source familiar with the deal says the parties agreed that Metallica would get 40% of the resale revenue, Live Nation 40%, DiCioccio 12% and Millette 8%, though another source said Live Nation’s share was lower.”

As the phone conversation continued, Roux informed Millette on the challenges they could face keeping the resale plan a secret as the scheme allegedly involved the following:

“Roux tells Millette to register a new URL and email address that is more “Q Prime-ish or Metallica-sounding” to mask the transfer and not “raise any eyebrows.” Because tickets are sent in the form of PDF files, they need to be emailed to be transferred.

The executives also discussed concealing the sale so it seemed as though the tickets were being held for sponsors, with Roux saying, “I’d have to transfer them all at once into a sponsor hold and then ship them to some entity.”

Roux and Millette outlined how they would sell up to 4,400 tickets per show for 20 concerts on the tour: Millette would be given access to 2,640 premium tickets as well as 1,780 “troubled” seats that seemed harder for Live Nation to move. Also known as distressed inventory, troubled seats are usually far from the stage, often on the upper levels of stadiums, sometimes with obstructed views. They were likely bundled with better tickets as a way to make sure they were sold.”

Based on this report, it’s clear how this scheme is ongoing and growing rapidly as we witnessed this first hand during all pre-sales and general ticket sales for Metallica’s S&M2 performance. Whether it was a marketing ploy or heart-felt solution, the group announced a second show on September 8th at the Chase Center in San Francisco, CA as many fifth members appeared to have secured their tickets. However, there’s a heap of tickets available on StubHub for this sold-out show ranging from $400+-$14,000+ per ticket. 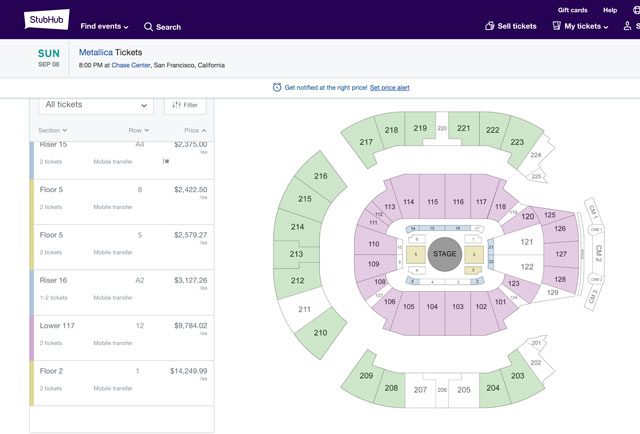