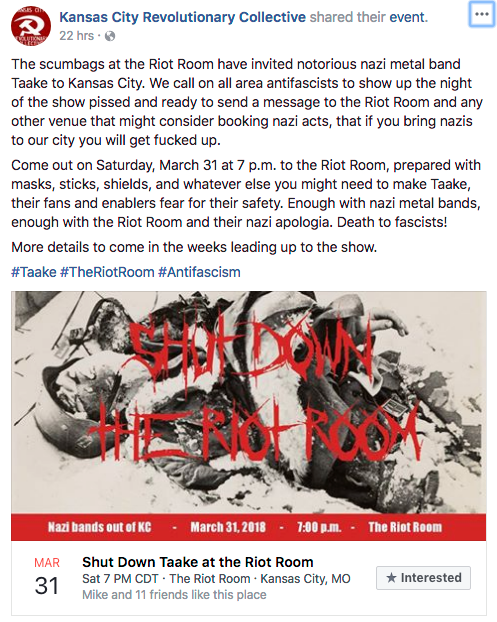 Following Talib Kweli cancelling his own show at The Riot Room in Kansas City, MO due to the venue booking Taake, the venue has since removed the Norwegian black metallers from their schedule.

Read the venue’s statement below:

“We have decided to cancel the Taake event scheduled to be held March 31st at The Riot Room. Refunds will be processed immediately for anyone who purchased tickets. As a venue, it is our priority to provide a safe, inclusive, and enjoyable environment for all patrons, artists, and staff. This always has, and will always continue to be our primary goal.”

Sadly, this most likely won’t be the last venue to cancel Taake’s show, which makes us question if the tour will actually happen. King Dude has already pulled out from supporting the group, their NYC and Chicago dates have already been cancelled. According to the Brooklyn Vegan, their Boston show at Middle East has been moved to Once Ballroom while their Baltimore gig at Soundstage as well as their Pittsburgh show at Rex Theater and Denver’s Globe Hall are no longer on the venue’s schedule. Meanwhile their LA show on 4/7 is now listed as “TBD.”

While many have speculated and instantly spread blame on the band themselves, it appears one aspect has been overlooked. Alleged Antifa members have been publicly placing threats on the band and their fans and are planning violent protests during the night of the scheduled show. Therefore, it does make more sense why more venues are cancelling the event altogether.

You can read the following statement below that came from a group called Kansas City Revolutionary Collective:

“The scumbags at the Riot Room have invited notorious nazi metal band Taake to Kansas City. We call on all area antifascists to show up the night of the show pissed and ready to send a message to the Riot Room and any other venue that might consider booking nazi acts, that if you bring nazis to our city you will get fucked up.

Come out on Saturday, March 31 at 7 p.m. to the Riot Room, prepared with masks, sticks, shields, and whatever else you might need to make Taake, their fans and enablers fear for their safety. Enough with nazi metal bands, enough with the Riot Room and their nazi apologia. Death to fascists!

More details to come in the weeks leading up to the show.