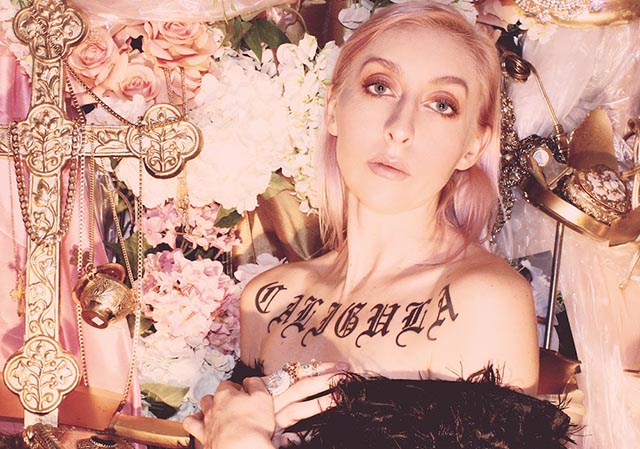 Kristin Hayter, better known as Lingua Ignota, has accused Daughters frontman Alexis Marshall of sexual and emotional abuse and rape.  In an interview with The Needle Drop’s Anthony Fantano Wednesday, Hayter talked about her experience. That in turn prompted her to make two official statements regarding the matter.

“I have included here a short statement summarizing the abuse I endured followed by a longer statement meticulously outlining my experience to the best of my ability,” starts Hayter’s shortened statement (as reported by Stereogum). “Receipts are available upon request. I was in an abusive relationship with Alexis Marshall from July 2019 through June 2021. I endured mental and emotional abuse and sexual abuse resulting in bodily harm.”

Hayter goes into detail from there regarding his abuses and revealing that it was so bad she attempted suicide last year. She continues:

Alexis’ addiction to one-sided sex effected me in extreme ways. I was subjected to multiple sexual assaults/rapes where I was fully penetrated while sleeping without my consent, after I explicitly stated this was *not ok with me.* Alexis obtained consent through deception, manipulation, and coercion. Alexis used me for sexual gratification in situations where I was deeply uncomfortable but consented because I was terrified he would cheat on me or get upset if I didn’t do what he wanted. In one incident of objectifying, violent sex, Alexis caused a severe injury to my spine and did not stop when I told him I was hurt. This injury resulted in debilitating pain and physical incapacitation for months. I needed surgery to treat this injury, a massive lumbar disc herniation that created an emergency condition called Cauda Equina Syndrome, which threatened permanent loss of bladder and bowel function. Alexis continued to require constant sexual attention even though I was severely injured. I needed his support for the surgery but Alexis abandoned me 24 hours before my procedure. Alexis cheated on me emotionally and physically throughout our relationship and triangulated me with other sexual partners as a way to confuse, humiliate, and destabilize me. He always denied his behavior, and gaslit me when confronted with irrefutable proof.

Alexis sustained patterns of lying and manipulation to excuse his behavior; he blame-shifted, minimized, denied, and provoked me so that he could call me aggressive and crazy. He used my past of domestic violence against me to claim what he was doing wasn’t that bad because it was not physical battering. He was jealous and resentful of my professional relationships and isolated me from friends. He took advantage of me financially. He blamed me for everything that was wrong in his life.

His abusive behavior continued and in some ways worsened after he completed rehab for sex addiction and started working a twelve-step program. He lied about the terms of his recovery. He weaponized his recovery against me and blamed me for not being able to get well.

As a result of his ongoing abuse I attempted suicide in December 2020 in the basement of our home. Alexis’ response to my suicide attempt was cold and unfeeling. Meanwhile, Alexis used threats of suicide and self-harm to manipulate me often, such as when I told him I needed to cut contact with him for my own well-being, or when I confronted him about lying.”

According to the statement, she only found out about his past behavior after their breakup.

“After our breakup, I learned about Alexis’ long history of predatory and abusive/exploitative behavior towards women, for which he is well-known in certain areas, and which has been corroborated by multiple people including a long-term ex-partner. These incidents range from sexual misconduct and sexual relationships with subordinates at work, sexual harassment, ultimatums, and sexual assault. Multiple peers and women performers have spoken to me about uncomfortable experiences with him. Alexis establishes trust with vulnerable women and then exploits them sexually. I learned that this behavior continued throughout our relationship and after he entered recovery.”

Hayter’s says her quality of life has suffered because of his torture and she continues to deal with the mental and physical damage he left behind.

“As a result of this relationship my quality of life decreased significantly. I suffered enormous psychological and physical damage. I continue to do physical therapy to treat ongoing issues with my spine and am in intensive therapy.”

Hayter first clued the world into Marshall’s abuses in October while responding to a fan on Twitter who responded to a post she made. Asked about the relationship status she outright said he was an abuser. She said that she wrote her latest album, Sinner Get Ready, about the relationship and that Marshall’s abusive habits are well-known around the music scene. Hayter also mentioned at the time that she was traumatized and wasn’t ready to speak fully on what happened, but that she also didn’t want to remain quiet.

The longer statement includes a detailed timeline of Hayter and Marshall’s relationship and his abuses. She hopes that her speaking out will both aid in her recovery while also helping others deal with emotional abuse, concluding:

“I want Alexis’ behavior to no longer live in the shadows. I want him to stop rewriting the narrative with self-victimizing fiction. I want him to get well, and he won’t get well if he’s lying and manipulating his recovery environments. I want him to be a good, present father to his children. I want him to heal. I want him to be accountable to those he has harmed. But my healing is not contingent on what Alexis does or does not do, and I cannot expect personal accountability from him — I never got it in the relationship and it would come as a great shock to me if I received a true apology now. Part of my healing is speaking out about what I have experienced. I want to fix what is so broken inside me that believes I deserve this, again and again, for years. I want to help others. I want to help survivors, and to help people who do not understand the insidious nature of emotional abuse. I want a life free from violence.”

Last month, Daughters decided to take a break from music, cancelling a handful of shows and halting activity on their Patrion. Marshall also made a statement at the time denying Hayter’s allegations, saying through a representative for the band:

“I absolutely did not engage in any form of abusive behavior towards Kristin. Kristin is a person that I loved and cared deeply for, however, our relationship was unhealthy for both of us. I can assure anyone reading this that I absolutely did not abuse her, mentally or physically. I am investigating legal options.”