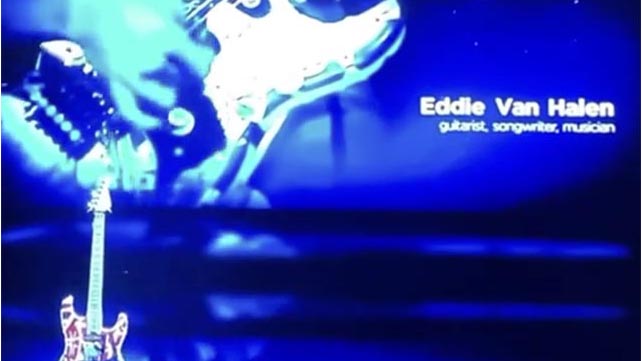 While it’s no longer a surprise and more of a tradition at this point, The Grammy Awards continue to more or less shelve metal and rock music. Despite previous efforts, The Recording Academy somehow continues to find a way for us to discover something new that has angered the metal and rock community. We’ve seen snubs before in their In Memoriam tribute, as this year they’ve extended the list, along with addressing the full list on the Grammy’s website.

We saw Lionel Richie give a heartwarming tribute to the late Kenny Rogers during last night’s ceremony. However, the late guitar legend Eddie Van Halen had a brief honorable moment, including his name on the screen with an archived clip of him playing a guitar solo with his iconic red-white-and-black guitar displayed on the empty stage. The clip lasted for roughly thirty seconds. Members of the metal community, including former Van Halen singer Gary Cherone, Eddie Trunk, and Chris Jericho, responded to social media expressing their disappointment.

Wolfgang Van Halen has come forward via Twitter in agreement of the disappointment by issuing the below statement:

“The GRAMMY’S asked me to play Eruption for the ‘In Memoriam’ section and I declined. I don’t think anyone could have lived up to what my father did for music but himself.

It was my understanding that there would be an ‘In Memoriam’ section where bits of songs were performed for legendary artists that had passed. I didn’t realize that they would only show Pop for 15 seconds in the middle of 4 full performances for others we had lost.

What hurt the most was that he wasn’t even mentioned when they talked about artists we lost in the beginning of the show. I know rock isn’t the most popular genre right now, (and the academy does seem a bit out of touch) but I think it’s impossible to ignore the legacy my father left on the instrument, the world of rock, and music in general. There will never be another innovator like him.”

⁦@BLABBERMOUTHNET⁩ also on it. We all know #Grammys don’t give a shit or have a clue about rock for decades. Since Tull over ⁦@Metallica⁩ . But this was EVH, a game changing once in a lifetime talent & influence. Ridiculous disgrace!! https://t.co/gHkD2aMpfC

I know electric guitars are all but forbidden on the Grammys, but Eddie Van Halen deserved more than that. Just saying.

Hey @RecordingAcad …no tribute to @eddievanhalen tonight? You and your bullshit awards can GO FUCK YOUR ASS!! And don’t ever try to give my band a nomination. I’d rather win a @RazzieAwards… #FuckOffGrammys #Grammys

Maybe an Artist that reimagined how one plays an instrument, who continues to influence generations of musicians and, literally changed the course of rock ‘n’ roll deserves more than fifteen second at the Grammys? #LongLiveTheKing