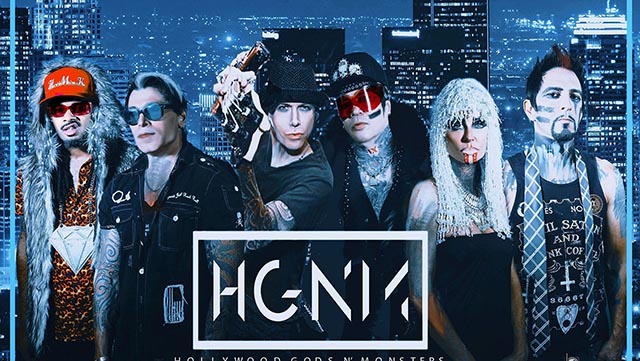 On Monday (27th), Haley revealed that he has been working with television personality/musician Diggity Dave (Shake The Faith, ‘Pimp My Ride’) on a group called Hollywood Gods N’ Monsters.

“I am very proud of what I’ve accomplished with my other band,” said Haley in a statement about the new band. “Nothing can take away the memories and the camaraderie that existed for all those years, but I just felt it was time for something new. When I heard this music, I knew this was the group of friends and the music I wanted to collaborate on.”

“It’s not like he ever thought he wasn’t challenged by the copious amount of talent that resided within Steel Panther; it’s just that he wanted to explore different kinds of music and was intrigued by some of the music I was sending him.”

Hollywood Gods N’ Monsters have been described by the band as “smashup” music, combining a variety of “styles, sounds, artists, genres, and attitudes.” Said Haley,

“This generation, the one before it, and the one that’s following are ripe for a band like us. It’s about losing yourself in the music, about dancing, about feeling alive. That’s why the DJ scene has conquered music — because people wanna go to a show and identify and recognize the songs they’re ingesting. They just wanna be enveloped in the music they know, their friends know, and hell… even their parents know.”

“We are not a cover band. This is original stuff we’re creating, and it’s a living, breathing history of music. We equate it to what DJs are doing, but in the form of a full band smashing together the songs every generation has grown up with. What other band is mixing the ’70s band Chic with Queen, Aerosmith, Sugarhill Gang, Blondie and DMX? And that’s just one song by us. Also, kids wanna see rock stars again… larger-than-life entities on stage that mirror the atmosphere. Think of us as a bigass American jukebox… where all the records in it have melted together… except when you press B5…you get that plus B6, B7, B8 and the track you thought you knew is now a stitched-up Frankenstein jam that makes you shake your ass harder than ever.”

“Once we figured it out, we then set out to find the missing pieces that would propel the sonic and sound needed to round out this parade of hooligans. We knew we were in need of two types of talent. A rapper extraordinaire that could dismantle any genre of music and reconstruct it into his own image, and a female singer that could terrorize through the throat but tingle the testicles. We managed to find the perfect purveyors of punched out panic.”

The band is rounded out by rapper Hype (a.k.a. H.M.K.) and singer 7even (real name Kris Aragon).

Haley had been with Steel Panther since its inception in 2000. He amicably parted ways with the band in July 2021 to pursue new opportunities.

Hollywood Gods N’ Monsters are currently working on their debut album. According to their Facebook page, it will be made available for free upon release.