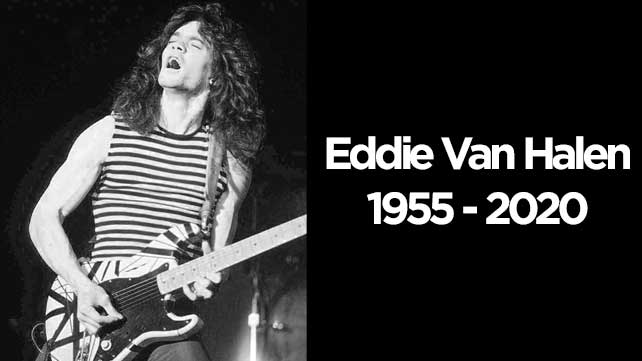 Eddie Van Halen is among the elite of generational guitarists, his passing last year left many musicians and fans alike devastated. Monday morning (11th), Van Halen’s hometown of Pasadena Ca, honored the legendary musician with a memorial plaque placed right near the Pasadena Convention Center next to the Civic Auditorium where a young Van Halen played between 1975 and 1978.

“This event brings together history and community to celebrate a world-renowned artist,” Williams said, according to Pasadena Now. “It’s not just the history of Eddie as a guitar legend, but also the challenges he faced growing up mixed race in Pasadena, which always spoke to me. And the community support and initiative to make this happen is inspiring. Thank you to everyone.”

“The Van Halen family emigrated from the Netherlands to Pasadena in 1962. Alex and Eddie Van Halen attended schools in Pasadena and began playing music together with Eddie on guitar and Alex on drums. Years later, the brothers formed the band VAN HALEN, along with bassist Michael Anthony and vocalist David Lee Roth. Between 1975 and 1978, VAN HALEN performed 14 concerts at the Pasadena Civic Auditorium and Conference Center. Regarded as one of the most successful bands of all time, VAN HALEN will forever be remembered for reinventing Rock ‘n’ Roll and their connection to Pasadena.”

Eddie Van Halen passed away on October 6, 2020, he was 65. A few weeks after his death, the Pasadena city council met to discuss ways to honor the late rock legend.

City manager Steve Mermell was directed to come up with ideas for how to best honor Eddie.

“Given the band’s connection to Pasadena,” city spokeswoman Lisa Derderian said Thursday, “we agreed it was appropriate to place a plaque outside the Civic Auditorium.”

Van Halen was inducted into the Rock And Roll Hall Of Fame in 2007.

Ranked No. 8 in Rolling Stone magazine’s list of the 100 greatest guitarists, Eddie Van Halen and his contribution to rock and roll and music in general will never be forgotten.