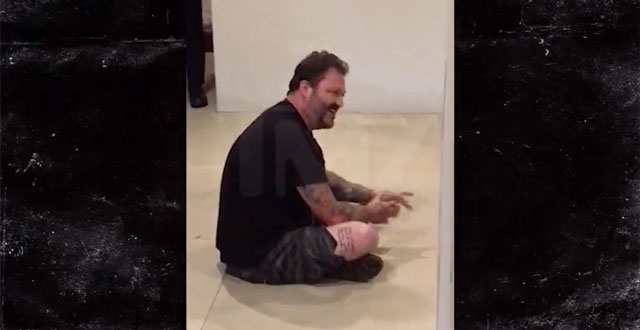 Skateboarder and former Jackass star Bam Margera was arrested early Wednesday morning at a hotel in Los Angeles. TMZ reports that the arrest was made following a non-physical altercation at the Luxe Hotel’s bar. He was released later in the day.

According to the report, a hotel staffer put Margera under citizen’s arrest when he started telling patrons at the bar a story about how he was being paid $100,000 by a woman to catch one of the patrons cheating. A video obtained by TMZ shows a visibly inebriated Margera sitting on the lobby floor telling police the same story, complaining about not having his phone and resisting arrest. One can hear in the video one of the officers on the scene telling him:

“This is not a f**king reality TV show. I know you’re fresh out of rehab, so let’s get your s**t together.”

Margera did eventually go with cops and was booked for trespassing.

The arrest comes on the heels of an appearance on ‘Dr. Phil’ where he agreed to go into rehab for his recent substance abuse issues. Margera went to rehab for what was supposed to be a 60-90 day stint, but bailed after a couple of days. A video published to social media Tuesday showed him not in rehab, but getting a tattoo of Dr. Phil’s name next to a H.I.M. “heartagram” logo on his neck. The ‘Dr. Phil’ footage has not aired yet.

Margera has already had a couple of alcohol-related altercations this year alone. In March, he flipped out at New York’s West Side Comedy Club, cursing his wife and manager, who had cancelled Margera’s early gig after he didn’t show up, and storming out before the second. Then, earlier this month, he had a meltdown at an Atlanta airport with an employee after being kicked off a flight for being too drunk.

TMZ has now reported Margera is back in rehab following his arrest at an LA hotel. He immediately returned to the facility after he was released from police custody. The facility is now demanding Margera to be committed to his treatment to recovery.