Portland’s 09 (Oh-Nine) have recently released their debut album, Lost Years. While the new rock duo consists of EJ Olson (drums) and Chancelor Reeder (guitar), the two have collaborated with a guest vocalist per each song on their twelve-track full-length offering. To celebrate the arrival of their new album, the band has decided to unveil a track-by-track explainer in three parts. Today (21st), the two have teamed up with Metal Insider to talk about tracks five-eight on the album: “Lost Years,” “Dead Roots,” “Masquerade,” and “Idle Hands.”

EJ: Writing this song was tough—it was one of five that we collaborated on after the start of the pandemic, which meant lots of Zoom sessions, and sending countless files back and forth. Studio trips weren’t locking ourselves away together for a week and collaborating face to face anymore; instead, it was a day here, a day there, sequestered in separate rooms tracking parts. We weren’t working directly with singers anymore, but instead collaborating remotely and sending stems to each other, entrusting the vocal tracking to engineers across the states.

This song was written about the passing of my partner’s father, and the whole grieving experience through it. Part of it is from my perspective in the moment, watching her family go through this terrible thing, and part of its written in anxiety of more of these things happening in my life, and getting lost in that fear—at one point, I’m referencing a dream where I see my past self, and I’m saying ‘this is what the years will have for you’, as if a warning to appreciate what you’ve got while you’ve got it.

We were lucky enough to pitch this song Cove, and he couldn’t have been more gracious—he instantly understood what we were all about, and he put a really cool spin on the stuff we’d written for Lost Years. Cove era Saosin is one of Chancelor and I’s biggest influences of all time, and we’re huge fans of what Dead American is doing, so it was an absolute treat for us to see this one come to fruition. It was the first time we really had to look at each other and say ‘holy shit, is this real life?’ Cove’s got such a unique quality to his voice, instantly recognizable and so emotive—he captures the desperation and intensity of the lyrics in his performance. It made so much sense to make this the title track.

EJ: About half the songs on the record were written wholly by us, and subsequently pitched to singers: many of them took what we wrote and sang it word for word, with their own flavor injected melodically. This was one of the few songs that we really got to go back and forth and collaborate with the singer on—anything I could write here would be an understatement when discussing the influence Cory has been on us over the last 15 years, but it was the collaboration I was THE most stoked on. It’s the song I’ve come back to the most in the months since completing the record. Sonically, we wanted these really heavy riffs to compliment Cory’s style, but we didn’t want it to become ‘just another heavy song.’ Instead, we opted to write this as if it was more of a pop song with some crushing guitar lines, similar to Hollow Heart.

The initial lyrics were written about losing a loved one who chose a really dark path for himself, and ended up pushing away anyone who ever cared about him. The overall tone is definitely angry—anger at this person for making the choices they made, and for blaming everyone else for their own ignorance and hate, but also anger at myself for not being able to do something about it sooner. These lyrics are sort of bitter, like ‘what the fuck happened to you? Where’s the man that I used to love like a brother?’ Cory took that context and came up with a bunch of lines that fit the theme. The chorus was all him, and we loved it so much it didn’t change whatsoever between demos and into the final version. I remember I was on a long drive, late at night, when I got his email with that first demo—I was punching the roof of my car with excitement. This song is so Cory, and it’s so 09, and I absolutely love it.

One of my favorite parts of this track was the bridge: we ended up wanting to do a group vocal part, but instead of a choir or a chant of some kind, we said ‘let’s do a choir of screams.’ There are two lines that we brought some of our best buds in for (Brandon Gustaveson of Artemis Calling, Brennan Allen of His Legacy, and Max Montgomery of Recursion). They all laid down some nasty lines, and it was cool to hear that come together, as we all grew up together going to Norma Jean shows—it was a cool ‘full circle’ moment.

EJ: Masquerade is a song written about the final throes of a relationship between two characters—one of them essentially has Stockholm Syndrome, and is beginning to realize what’s been done to them by their abuser. The protagonist realizes they’ve been manipulated through this entire facade, and that nothing they could have ever done would have been enough to repair whatever damage had been done to their abuser in the past. The song is about being honest with yourself and moving on in order to heal. It’s the first song I’ve written for 09 that isn’t auto-bioraphical, so it was interesting to kind of step back and observe this other situation and just write about it freely, without any sort of self consciousness, like ‘am I revealing too much about myself here? What will my friends or family think?’ I was able to let go and just run with it.

The songwriting process was really different on this track—on all of our singles so far, we’ve been able to collaborate directly with the singers we’ve featured through the whole writing process. On Masquerade, we had the entire song finished before Matty even heard it—it was mixed, mastered, and featured Chancelor and I on vocals. Before COVID, this was originally going to be our last release before launching a crowdfunding initiative for the new record, and singing on the track ourselves felt like a cool way to launch into a new era—a fun, one off single that we really enjoyed writing. We actually had another song written with the idea of pitching Matty, but he ended up really digging this particular track, and we all felt like the fit was perfect. Matty brought a whole different energy to the song, he totally transformed it. It was really cool for us to sort of hand this song over and let him put his own mark on it—the dude is a stud, a total professional, and a killer singer, so we trusted him wholly with just taking the song and putting his spin on what we had written.

Chancelor: At the time, we didn’t have anyone lined up for this song. We were like, “why don’t we just sing it ourselves?” There’s an entire version of the song with us on it. Maybe we should release it one day, just for fun? Obviously Matty sounds way better than we did, but this song was one of the only songs on the record where I contributed vocally and lyrically—I’m really proud having been able to pull from a lot of my earlier influences, the biggest one being Thrice. It was so cool working with Matty on it, we’re really happy with how it turned out.

EJ: With this song, we wanted to make something fast and hard hitting. This is also our first song with a guitar solo in it, which was a cool opportunity for Chance to flex a little bit and for us to bring a different type of melody to one of our songs.

Lyrically, Idle Hands is about anxiety and trying to reconcile your own perception with the truth of the world around you. Chris—who we knew when this project started, before we ever wrote a song, that we wanted to collaborate with—generally writes his melodies and song structures using placeholder lyrics, which are largely incoherent. It was a really cool process that helped us to come at the lyrics we’d been writing in a different way—having the cadence and sections written revolving a certain flow or a number of syllables pushed us to be more creative in spots, and really work to make the lyrics work for us and serve the song, instead of trying to force a round peg into a square hole. Melody is something Chris just excels at—he writes the catchiest stuff. From the group vocals leading into the chorus, to the alternating lines at the end, there are a ton of granular elements that give this song a great texture.

Chris Ratzlaff: I’ve known Chancelor and EJ for a really long time, just from playing shows in the PNW. I have the highest respect for the way they write music—when I heard some of the first 09 tracks they were coming out with, I was really blown away by it. I wanted to do a song with them, because I wanted the challenge of collaboration, which is usually very hard for me. The band sent a demo of what the track would be, and I just sang over it. I sent over maybe 5 different chorus ideas. EJ sent me a bunch of random lyrics of what he wanted the song to be about, and I kind of curated them into a cohesive piece that made sense but that also phonetically sounded good. 09 is really contemplative about how a track sounds or feels, so it was a really good lesson on how far you can take construction on a song—I feel like I grew so much as a songwriter just being a part of this project. 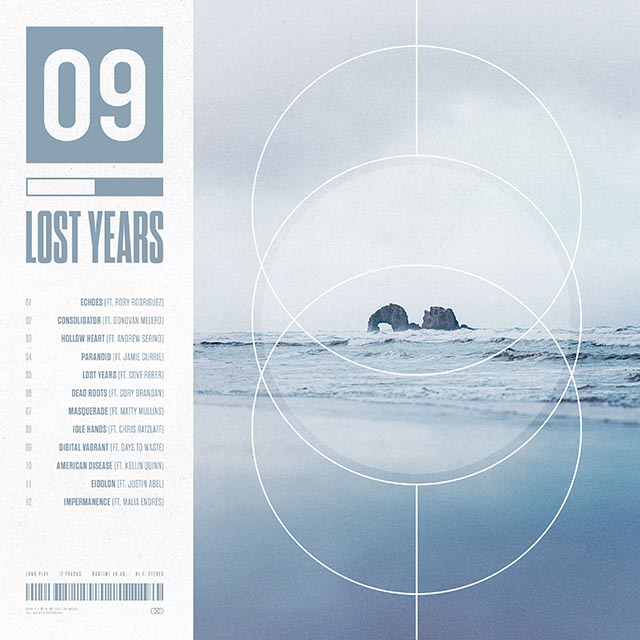