Each Tuesday, Metal Insider will be posting a look at the new releases coming out that day courtesy of contributer Chris Colgan. We chose one hell of a week to start doing it!

Did someone put out a memo saying that June 8th was the date when every record label in the rock and metal world had to put out an album? There are 25 new releases coming out today, and they’re from all over the genre spectrum. Unless the only thing you listen to is basement black metal (and if that’s all you listen to, then you need help), you’ll enjoy at least one release appearing today. So plan on spending some money on at least one of these albums this week:

Nachtmystium, Addicts: Black Meddle, Part 2 by (Century Media)
Nachtmystium came out of nowhere with 2008’s Assassins: Black Meddle, Part 1, which easily ranked among the best albums of that year. Addicts will likely do the same, if Blake Judd and Co. continue the psychedelic, progressive, and generally weird elements of Assassins. This album’s success will propel Nachtmystium into the worldwide spotlight and earn them a lot of new recognition, which they rightly deserve.

Nevermore, The Obsidian Conspiracy (Century Media)
It’s been five years since This Godless Endeavor hit stores, and in that time, both Jeff Loomis and Warrel Dane have released solo albums, and Nevermore has also put out their first DVD. I have the highest expectations for The Obsidian Conspiracy. Nevermore has not released a mediocre album yet, and I don’t think they’ll start doing that here.

Heaven Shall Burn, Invictus (Century Media)
I’ve already listened to Invictus once, and I was floored. This album is positively destructive in its musical and lyrical approaches, containing even more profound content and nuance from an already-intelligent band. This album blows away almost every other album released in the past decade by bands in the German metalcore/melodic death metal scene. This album is for you if you are a fan of either genre or the German scene in general.

Kingdom of Sorrow, Behind the Blackest Tears (Relapse)
Jamey Jasta’s other band needs to avoid the sophomore slump as much as possible, because the veteran hardcore singer has too much on the line to risk releasing an unimpressive album. Luckily, Kingdom of Sorrow’s self-titled debut had an overabundance of high-quality, hardcore-infused sludge metal. I think it’s safe to expect the same on Behind the Blackest Tears.

Circle of Dead Children Psalm of the Grand Destroyer (Willowtip Records)
Back from a two year hiatus, the seminal deathgrind quartet is set to unleash their fourth full-length album on the masses. Psalm of the Grand Destroyer will likely be even more destructive than 2005’s Zero Comfort Margin, the last release from the Pittsburgh group, because they’ve had so much time to build up their anger and violence. Expect this album to be a new high standard in deathgrind.

Watain, Lawless Darkness (Season of Mist)
The Swedish black metal group has, for the most part, put their 2006 NSBM controversy behind them, focusing now on the release of Lawless Darkness. Watain has always been one of the more traditional black metal bands to come out of Sweden, so black metal fans looking for a good mix of the Swedish and Norwegian styles will find what they want here.

This is Hell, Weight of the World (Rise Records)
Long Island’s hardest working hardcore band is already back on the road before their album even hits stores. These guys love touring more than any other band I’m aware of, and regardless of how the album is received, you can bet that they’ll stay on tour. I’m predicting a very strong album from This is Hell, especially when considering the excellence of their last full-length, Misfortunes, as well as the awesome EP’s Cripplers and Warbirds.

Whitechapel, A New Era of Corruption (Metal Blade)
One has to wonder about how the other members of Whitechapel handle vocalist Phil Bozeman’s tendency to skip headlining shows at small venues. That just looks bad in the big picture. Regardless of that, A New Era of Corruption is sure to feature much of the same chug-chug-scream deathcore that fans heard on This is Exile. Why change the formula when you’re already one of the most popular deathcore bands in the world?

The Haunted, Roadkill (Century Media)
The band’s first live CD/DVD combo will center on the band’s live show on February 13, 2009 in Amsterdam, recorded just for this release. There is also a touring documentary included, along with bonus tracks from the recording sessions for their last studio album, Versus. If you enjoy the Swedish thrashers or the band that spawned them, At the Gates, then this DVD will be a good pickup.

Pain, Cynic Paradise (Nuclear Blast)
In other side project news, Peter Tägtgren’s other band is finally getting their sixth album released in America. This album is far from new, as it was released in October 2008 overseas. However, for industrial metal fans not versed in the underground, this album will definitely merit checking out. I’ve always been impressed by Pain’s older material, and Cynic Paradise will likely impress as well.

The Ghost Inside, Returners (Mediaskare)
No other melodic hardcore band currently out has made as big a splash in as short a time as The Ghost Inside. This had more to do with the band’s relentless touring than anything else, although 2008’s Fury and the Fallen Ones was still an excellent album. Returners will likely end up as one of the biggest releases of the year, as long as it isn’t a complete mess.

Keep of Kalessin, Reptillian (Nuclear Blast)
If you enjoyed Keep of Kalessin’s new sound on Armada and Kolossus, then Reptilian should be at the top of your list of albums to check out. With more amazing compositions from Obsidian C. and the relentless drum onslaught by Vyl, Reptilian has the potential to be a huge breakout album for the band.

Mychildren Mybride, Lost Boy (Solid State)
It’s doubtful that any song on Lost Boy will match the instant appeal of “Headshot!”, a.k.a. “The Halo 2 Song”, from the band’s debut, Unbreakable. But that might turn out to be a good thing, if the band can garner some positive reviews without the inherent gimmick of such a non-serious song. Mychildren Mybride has the ability to lead the Christian hardcore scene, if they can break out of the somewhat non-serious image they carry.

Leng Tch’e, Hypomanic (Season of Mist)
The fact that there are two deathgrind albums being released in the same month is impressive. Two on the same day is unheard of. Two on the same day that are both high-quality albums from bands at the head of the genre? Well, I suppose there’s no such thing as asking for too much.

Call to Preserve, Life of Defiance (Facedown)
It’s very hard to believe that Life of Defiance is Call to Preserve’s third album, but the straightedge Christian hardcore outfit has been signed to Facedown’s roster in one form or another for five years now. Despite the fact that they’re mostly unknown and they’re not exactly stylistically original, they’ll satisfy your urge for hardcore if you want to try a new band.

Yakuza, Of Seismic Consequence (Profound Lore)
Samsara and Transmutations were Yakuza’s coming out party, showing the world that they had the chops to hang alongside the best, most talented bands in the experimental metal world. Of Seismic Consequence will be the establishing album that will decide if they have the staying power of their better-known peers in Burst, Intronaut, Burnt by the Sun, and Candiria.

Pain of Salvation, Road Salt One (Inside Out U.S.)
This album is touted as the first half of a double album project from Pain of Salvation. The band’s fans seem to be divided about whether they like or dislike the evolution in their sound over the course of seven studio albums. It’s probably a safe bet that if you’ve liked their later material, you’ll like this too.

Better Left Unsaid, Only the Dead to Witness (static Age Records)
Now signed to the recently-created Static Age Records, Better Left Unsaid is hoping to capitalize on the underground success of their debut, The Fight Within, and achieve a wider audience with Only the Dead to Witness. The band takes a lot of influence from As I Lay Dying’s early releases, with the addition of plenty of guitar solos. The formula could be a winning one if it receives enough exposure.

Hail the Villain, Population: Declining (Roadrunner Records)
As radio-friendly hard rock grows ever more saturated with new bands trying to get noticed, Hail the Villain appears with the lofty ideas of creating an entire world centered on their music. Their bio says they want to create comic books, an interactive website, and possibly even a movie, all based around the music they write. Pretty high-reaching goals for a band with no releases until now. Let’s hope their music can match the height of their goals.

Amestigon, Sun of All Suns (Hauruck)
The Austrian black metal group has finally released their first full-length album after more than 17 years of existence. This album is sure to sound similar to material from Abigor, especially since being a member of Abigor’s lineup seems to be a requirement for being part of Amestigon. If you’ve enjoyed the band’s numerous splits and EP’s up to this point, then you have to buy Sun of All Suns.

Silverstein, Decade: Live at the El Mocambo (Victory Records)
The first live CD/DVD release from the post-hardcore group chronicles the 10th anniversary shows that they played at Toronto’s famous nightclub, El Mocambo. Is it redundant to say “The El Mocambo” since “el” means “the” in Spanish? Putting aside grammatical questions, this DVD will be a must-buy for fans of the band, and largely ignored by everyone else, because that’s the hot-or-cold appeal of Silverstein.

Next Week: A new live solo album from Rob Halford, a DVD from Porcupine Tree, and much more! Stay tuned! 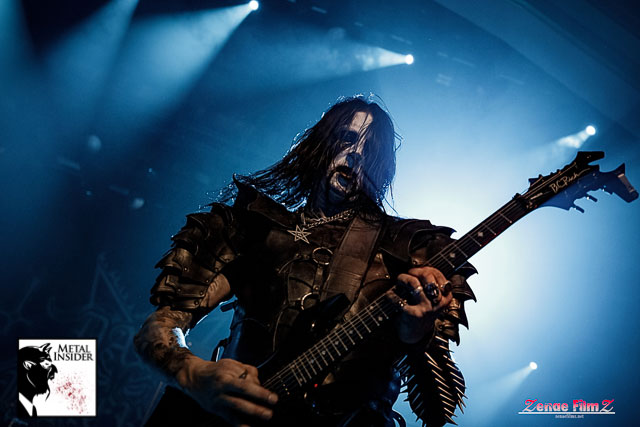