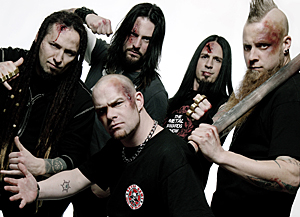 Five Finger Death Punch’s The Way Of The Fist was metal’s biggest sleeper hit in 2007. Coming out of nowhere, featuring former members of bands with questionable credibility like Motograter and WASP and a goofy, possibly self-aware tough-guy image, 5FDP’s potential was unclear at best. But the band continued turning heads on 2008’s Mayhem tour as they dominated metal radio and sold over 300,000 copies of The Way Of The Fist, an unheard of feat for a brand new metal band.

Today, Metal Insider is exclusively bringing you “Burn It Down”, the first new cut from 5FDP’s upcoming War Is The Answer. Featuring a grittier, heavier style than anything on The Way Of The Fist, this should win over at least a couple of you old curmudgeons. Let us know what you think in the comments!