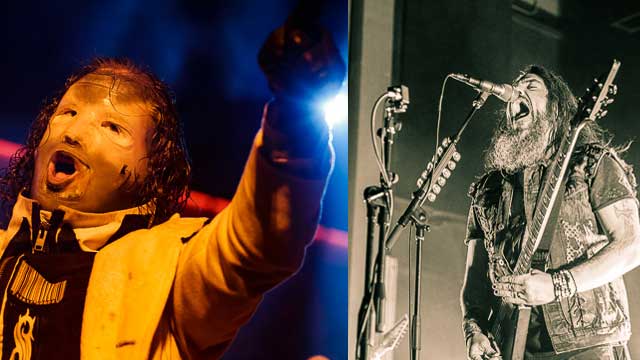 The COVID-19 pandemic has caused a lot of shows to be postponed and our everyday life to be altered. Consequently, a lot of artists have recently been asked about the quarantine and when they think shows will start to resume. Slipknot’s Corey Taylor was speaking with Rock Feed and expressed his opinions on the matter.

“It all depends on how we open this back up. You almost have to attribute it to the way casinos are opened [in Las Vegas], with a soft opening. They basically do an opening before the grand opening and people wander through and it’s not packed, it’s not huge. It’s just seeing what people are going to be into and seeing if they are into what’s being provided.

Taylor mentioned that it might take some time for concerts to come back to full-force and people might actually get tired of watching YouTube videos and grow eager for live entertainment.

“There will be some acts that have to fall on the sword. If we do it right, and build that enthusiasm, probably within a year, maybe a year and a half, we’ll see the same enthusiasm for live shows that we did before. Because, I think that once people realize everything is going to be okay, people are going to realize that they take for granted that they haven’t been to a live show in a long time, and the live concert experience will be something they come back to. They’ll be tired of watching it on Youtube, watching it on their phone. They’re going to want to be in the experience. I think there will be a real renaissance of live entertainment.”

He did add that Slipknot playing small venues would be interesting and that they have a lot of gear to pack in. However, he did express interest in playing some intimate “throwback” shows.

“It helps when it’s a room that’s long, where we can get all of our crap in. We have so much crap now, we’d have to go to Guitar Center and start finding shit – like ‘Clown, you take that kit and Frankenstein it. We’ll just put it in there. No, you can’t shit on it! [laughs].’ It’d be funny, it’d be insane.”

We’ve actually talked about doing something like that for years, and doing a throwback show. And doing a throwback show in a way where we wear the old gear as well. But that’s… I mean, I don’t know, few and far between. We’d have to make sure that we could do it in a safe way, obviously. Not just from a coronavirus standpoint, I mean that would be IN – SANITY. But, we’ll see. It would be insane.”

Machine Head’s Robb Flynn, another prominent figure in the metal community, posted a lengthy response on his personal blog about shows returning in 2020, instead of the current rumor of 2021. Flynn provides many examples to convey his thoughts, including excerpts from public health expert Zeke Emanuel, listing particular events and providing links to other websites. You can check out the entire post below:

““Public health expert Zeke Emanuel made headlines after claiming fall 2021 would be the earliest we could expect concerts to come back. “Larger gatherings — conferences, concerts, sporting events — when people say they’re going to reschedule this conference or graduation event for October 2020, I have no idea how they think that’s a plausible possibility,” Emanuel claimed. “I think those things will be the last to return.’

“‘California governor Gavin Newsom has added to the prediction that concerts are unlikely to return until 2021. During a press conference, Newsom said mass gatherings would be “negligible at best until the population has herd immunity and a vaccine is widely available. Large-scale events that bring in hundreds, thousands, tens of thousands of strangers, all together across every conceivable difference, health and otherwise, is not in the cards based upon our current guidelines and current expectations.’

“I’ve been talking about this on my podcast for almost 6 weeks, that Ezekiel Emanuel guy knows his shit.

“Not guided by politics or partisan bullshit, just science and facts. Oh right, science has been demonized, we should believe in god and evangelicals and billionaires because they’ve always had “our best interests” at heart…

“What’s that famous line, ‘Religion is what keeps the poor from murdering the rich.’

“Guys like Zeke and Fauci have been sounding the alarm for a long time now… This pandemic, like nearly all pandemics, will last 18 to 24 months. It’s going to come in waves. We’re gonna be hunkered down for a while, then we’re going to be able to lighten up some of the restrictions. Then it’s going to kick back in and we’re gonna have to hunker down, quarantine, shelter in place, social distance. Only to then will free things up, again at least to some degree, and then a third wave will probably come… and by then we will have the routine down so it will likely be under control, with the vaccine that’s wildly available to the general public.

“And not just NBA players and celebrities

“It’s a tough pill to swallow

“Just like the great article that Randy Blythe posted about the gigantic media advertising blitz we’re all about to be subjected to, that’s going to take us a “back to normal” https://forge.medium.com/prepare-for-the-ultimate-gaslighting

“Things will never truly be back to normal.

“In fact we’re going to have a whole new normal.

“Remember flights pre 9-11? If you do, they were pretty goddamned relaxed. It’s been anything but relaxed ever since. That will never change.

“’And oh the times they are a changin’…’

“But as far as the music business goes? Concerts will be the last thing that are allowed to happen. The large public gatherings that we’ve grown accustomed to? These things will never be the same.

“And like what happened during the Spanish flu of 1918, even when it ends, people are not going to be ready to go back to normal anyway.

“Did you see the post on my Instagram, about the survivor of the Spanish flu? It states quite clearly, that it took another two years AFTER the Spanish Flu ended, for people to feel OK with going out again. Being sheltered in place for so long, the fear of spreading it, wondering if it was truly over, the unemployment, the financial hardships… it had an effect on peoples collective psyche.

“If that’s anything to go by, it’s going to be about four years before we truly get back to “normal”, (whatever that is?). But like a Mike Tyson left hook the truths keep coming. People you know will die. Jobs you lost will not come back. Businesses like restaurants and bars and breweries will close permanently, and even if they re-open, they will have to cut capacities by 50% due to social distancing restrictions. As you may know, most of these places were already just skimming by with the margins they had.

“Rock Clubs and Venues will have to cut down capacities by at least half.

“The healthcare that came along with that job you lost, won’t return.

“We’re kinda in a honeymoon phase (for lack of a better word) right now. The loss of income, the loss of routine, the loss of many things we just took for granted… it all seems surreal right? A bad dream. A haze we’re gonna snap out of any minute.

“The glaring income inequality this country has fostered has been highlighted by the harshest of bright lights.

“The everything-for-profit-system the powers-that-be have established does not work.

“And all in a country were 3 men own more wealth than the bottom half of the entire country.

“That’s right, Bill Gates, Jeff Bezos, and Warren Buffett have a combined total wealth of $330 billion. More than the bottom half of the United States of America combined.

“We’re pissed off at motherfuckers hoarding toilet paper, wait til you find out the Walton family who owns Walmart, own more than 42% of the bottom half of America

“Ain’t that some shit?

“And here we are fighting each other for the crumbs

“The Billionaire class wants to keep us poor, keep us divided, remember that.

“Metal fans will be the most resilient of all the fan bases. I have zero question that they will be the first to return, determined to go back to shows, maybe to a fault (LOL), and for that I’m unbelievably grateful.

“Pop and hip-hop audience often spend a lot more at shows than metal folks, insane amounts of money for “highroller seats”, but with very little dedication to the artist/act.

“Sadly, we metal fans will also likely be most affected by this pandemic, as we are the one audience that is often struggling to live paycheck to paycheck.

“It’s hard to accept the length of something like this, but the sooner that we can wrap our heads around it, the better we will likely be. This false notion that in just a few months we’re going to get “back to business,” is good for a soundbite on Facebook, but bad for making realistic plans.

“I myself have been able to keep a far more positive mindset knowing that Machine Head shows will probably not resume until summer of 2022, and that we will likely not get fully back on track until 2024, if we ever get back on track AT ALL!

“We’ve gotta plan far ahead. We’ve got to figure out other ways to pay the bills.
Thinking that far ahead, makes you look at your life in a whole different context doesn’t it?

“Let’s face it, most music industry folks (record biz, crew, promotion, etc.) will most likely change jobs entirely and do something else for the rest of their lives. This of course happens as the record business takes another hit.
Clubs, venues, promoters, a lot of life as we knew it… it’s all going to be decimated. Look at all the Euro festivals that have already been cancelled.
https://www.musicbusinessworldwide.com/germanys-rock-am-ring-rock-im-park-wacken-cancelled-due-to-coronavirus/

“Physical CD/vinyl sales have plummeted (no record stores open). Music and podcast streaming numbers have gone down by 50%, though Netflix and gaming has jumped by 35%.

“And look, I’ll say it here, I hope I’m wrong about the length of time. I would love to be wrong about this. But listening to people like Dr. Anthony Fauci and Ezekiel Emanuel…. It makes me think otherwise.

“Oh wait, that’s right we can’t listen to Fauci because he’s trying to undermine Trump. Now there’s a whole #FauciFraud, #FireFauci from all of these right-wing conspiracy nut balls.

“And you wonder why were so lost?

“And you wonder if we’ll ever get out of this mess?

“Really concentrate on that.

“This is not all doom and gloom.

“I strongly believe that the world will be a MUCH better place when this is all over.

“This is our moment to transform.

“This is our moment to that the giant Reset Button up in the sky.