With the year in music just about over, Metal Insider‘s staff and contributors are taking a look back and naming their top ten albums of 2012. This next list comes courtesy of Metal Insider contributor Chip McCabe. We’re also including a Spotify playlists with a song from each album, if available. We’ll also be sprinkling in other lists from artists over the next few days as well. What are your top ten? Weigh in in the comments section.

10. Ferocious Fucking Teeth – s/t (Safety Meeting Records)
Most people reading this are going to immediately go, ‘Who?’ Fair enough question. Hailing from New London, CT (not exactly a metal Mecca) and signed to tiny Safety Meeting Records (not a metal label per se) means that most metalheads will probably not have heard this album yet. However, this album was recorded with the legendary Steve Albini and features some of the heaviest stoner jams you will encounter from this past year’s offerings. Equal parts noise and stoner rock, FFT deliver a chaotic barrage of sound. You can listen to the entire album for free on their Bandcamp page. 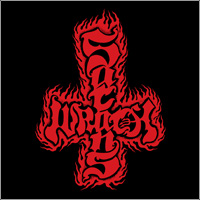 9. Satan’s Wrath – Galloping Blasphemy (Metal Blade)
I’m a huge fan of Possessed and a lot of the early proto-death metal bands (you know, when death metal and thrash were still pretty much the same thing). So it’s no surprise that a band that freely borrows from that era and those bands (especially Possessed) would make my list. Bullet belts, goat masks, gauntlets, severed goat heads…that’s just the promo photo. I don’t care how tongue-in-cheek the overtly Satanic references are (or aren’t) because these guys have the chops to back it up. This is what retro thrash should sound like (you know…good). I made comment about this album on another site that they totally remind me of all the bands from the “Satanic Panic” era that your parents and religious leaders warned you not to listen to. Well, I’ll see you all in Hell because this album has been on constant repeat for me since its release date.

8. Christian Mistress – Possession (Relapse)
2012 was great year for bands successfully revisiting past metal glories. It was also a great year for females in our usually male-dominated genre. One band that embodies both of those statements is Washington’s Christian Mistress. Their Relapse debut, Possession, hit the streets way back in February and I knew upon first listen that this was probably going to be one of my top albums of the year. From the distinct traditional/NWOBHM songwriting to the prowess of front woman Christine Davis, to the killer twin guitar solos this band absolutely made their mark on the scene in 2012. The unpretentious way this band goes about their business is refreshing. Their ability write really fantastic, guitar-driven, metal anthems hearken back to the days of bands of bands like Rainbow, Angel Witch, and the first two Maiden records.