Psychosexual, the new project led by former Five Finger Death Punch drummer Jeremy Spencer on vocals, is gearing up for his debut full-length effort, Unholy Hymns for the Children, which will be released sometime this Fall. Spencer is portrayed as the Devil Daddy character for Psychosexual. The group has released quite a few music videos, including “The Torture Never Stops” and torching the chart with the number one single “Devil From Hell.” We caught up with Spencer to discuss the project, learning more about his Devil Daddy persona, and more.

Can you explain why you decided to relaunch your band?

We had kind of done a record really quick and just threw it up there on Spotify. We kept writing because nobody could tour or do shows because of the pandemic. So, the song “Devil from Hell” happened right away. And I was, “Ah, man, I wish this could have been the first song that we released.” Because, it’s a perfect introductory song in my opinion. And we were so new into launching the band anyway, it was, “Who cares? Let’s just start over. There were no rules. It doesn’t even matter. Let’s just do it the way we want to do it.” I may bring back some of that old music at some point or may not. We just continue grinding away and making music pretty much five days a week anyway. So, it just felt more appropriate to go with “Devil from Hell” as being the lead off song. I think that it’s more appropriate.

“Devil from Hell” is a fun song and has a catchy video to go along with it. Can you talk about the making of the video?

It was a lot of fun minus the freezing cold wind in December in Vegas, in the desert because there’s nothing to block the wind. But, there’s this little tavern saloon, probably 30 minutes outside of Vegas and lots of people shoot stuff there. It’s kind of a famous little place, but it’s just got the perfect vibe for this. We hired a team of stuntmen to do the fight scene, the bar fight and those guys really knocked each other around pretty good. And, they do it every day. I don’t see how they’re not completely broken, but they did such a great job. It was really fun.

We had a blast making that video. It was a two day shoot. We had the horses outside and it was crazy. I remember looking at the shot list and seeing the bottle breaking over the head scenes and I’m thinking, “All right, it’s going to be a fun day. You get to break bottles over people’s heads.”

For some weird reason the video reminds me of the NBC TV show called The Good Place. There was this whole bar scene there where they saw demons and the video had a similar vibe to it.

Oh, that’s cool. That sounds like an interesting show.

It is. It just ended, but it was a good show. Speaking of demons and characters, how did you come up with the Devil Daddy persona?

I had been working on music for a long time by myself, just in my home studio and I would write and record and sing on them and sing on the tracks. And I was like, “I’m starting to miss a band environment.” I wanted to do some darker and heavier music, but I thought, “What’s this voice look like?” Because, I don’t want to just stand up there and look like myself, a normal rock guy in black jeans, black shirt. That’s been done to death. So I had never seen the Devil frontman ever in my life. And, I don’t know how that’s possible, but I thought, “Okay, I’ll be the Devil. That’s perfect. I’ll do that.” And it was pretty much that simple.

How has this whole experience been like for you, from being the drummer for Five Finger Death Punch to a singer for your own band?

It’s been fine. It’s natural to me because it just seemed like the right thing to do. And, it feels fun and stimulating and fresh and exciting. It may be confusing to some people and that’s okay. They don’t have to like it or understand why I’m doing it. There’s many different types of music and they can go listen to other stuff that’s fine. But, I think we’ll find our audience. I think some of the audience will be the Death Punch audience and some of it won’t be. I mean, we’re a pretty eclectic band. We’re kind of all over the map and through our heavier elements or goth elements or some poppier elements, it’s kind of… It’s just all over the place. So, we’ll see how it goes. But to me it seems completely natural.

Well, it’s not going to be Death Punch and nothing will be. I mean, that band is a huge entity and it has its own sound and style. I mean, there’s heavy elements like Death Punch, for sure. But, like I said, we’re kind of all over the place and I don’t want to be pigeonholed into one certain style. I want to be able to do whatever I want. And that’s part of the reason for doing a character based band is, it’s wide open. The rules don’t really apply. It’s all fantasy, so you can kind of paint it however you want it, which is cool.

How would you describe creating this album during a pandemic?

As terrible as the pandemic’s been, it’s been a real blessing for us because we’ve been doing nothing but making music. So, to be honest with you, we’re on album six. That’s how much we’ve been working. And, not a lot of people know that, but you can’t do shows you can’t tour. So, we go to the studio five days a week and it doesn’t take long for stuff to start adding up. So, music’s just snapshots in time. It’s what you’re feeling at that particular moment. So, we make us something when we feel that it’s right and it’s done, and it’s a good, complete package, we put it away and move on to the next thing. And, that’s kind of how we’ve been doing it ever since the pandemic started.

I applaud your creativity during this pandemic. Six albums. That’s quite a bit.

The funny thing is, we would be working that much if we could, but I think the other opportunities would have opened up that may have prevented us from getting so much music done all at once. But, we love to work, that’s why we do it. Because, it’s not really work. I mean, it’s our job and it’s our creative passion and hobby, but it’s a lot of fun. I don’t consider it a burden to have to go do it, or I wouldn’t do it.

I mean, I’ve already been in a pretty reasonable size band that had some success and I don’t have to do this anymore if I don’t want to. But, I’m enjoying every second of it. And, it’s really important to enjoy the process because if you’re just waiting for some end pay off, you might be disappointed. Especially with the way people don’t buy shit anymore.

Speaking of what’s happening these days, shows are opening up. Tours, festivals are starting to happen or at least being scheduled. Do you guys have any plans for a live show or live stream?

Yeah, we are in talks to do a couple of one-off shows. I’m not sure when those are going to take place. I heard something might happen in October, not confirmed yet, so we’ll see. I hope it happens. If not, we’ll continue writing and recording and we will probably do a livestream show. We did one last year. It was weird. You would finish a song and there would be five or 10 crew guys in there and they would clap, but you have to act like you’re in an arena because you’re on the internet. So, it was a little strange and that was the first show we ever did. So, you combine that together and it was a little bizarre, but it was all right.

Is there just anything else you want to say or add about the album?

Well, just give it a chance. I mean, it’s quite all over the map like I was saying, it’s pretty eclectic. There’s many different styles. It’s not all “Devil from Hell.”  It’s a fun list and I think it’s a solid record. We’re very proud of it. 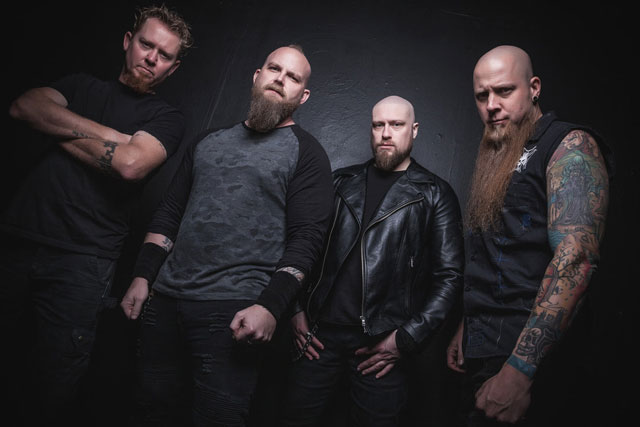