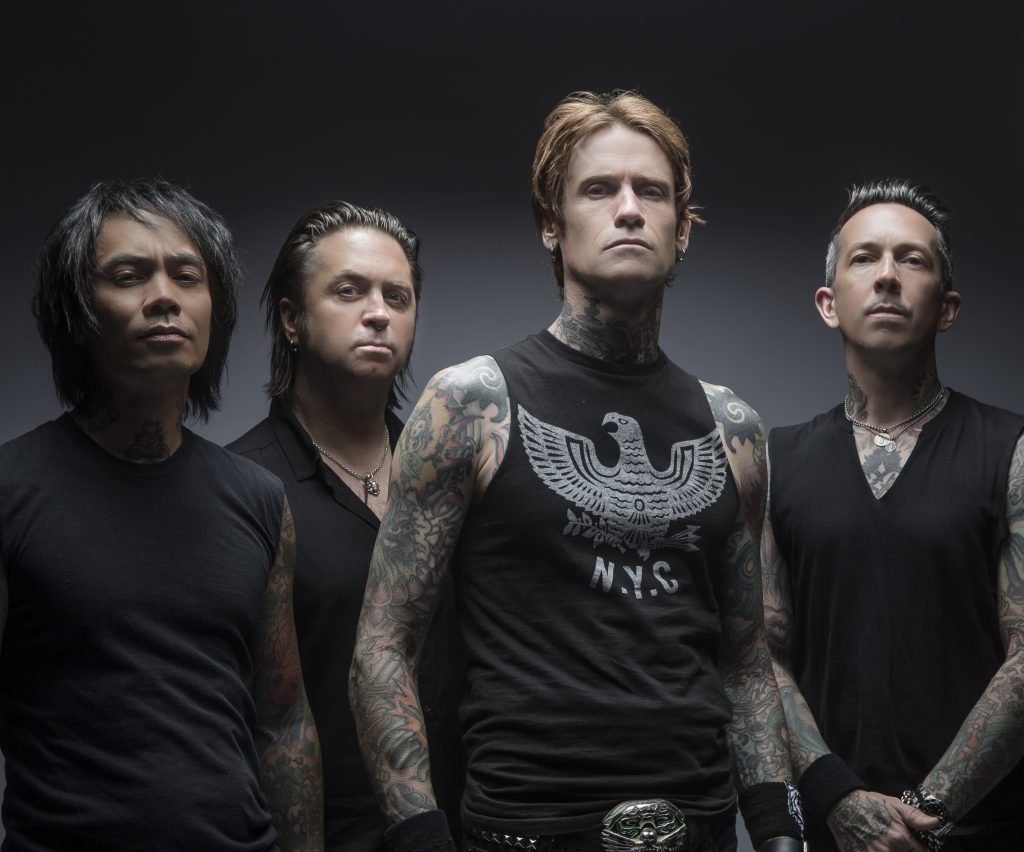 Buckcherry’s new album Warpaint was released this past Friday (8th) via RED Music (order here). We recently reviewed the record and expressed how it brought the group back to the hard rock spotlight (read our review here). While the band are currently touring across North America, guitarist Stevie D took spent some time with us to answer a few questions.

You’re just released your eighth studio album, Warpaint. Could you tell me a little about the writing and recording process for it?

Josh and I wrote 30-40 songs for this one. I would build a verse and chorus and send to him. If he connected with it, he’d then come over to the house and we would hammer out the rest of the song. He would also come over with ideas for a chorus, let’s say, and then I would go back to the studio and build a complete song around it. Once we had say 30 songs we felt good about, we then sat with our manager Larry Mazer and producer Mike Plotnikoff and narrowed it down to the 11 that were going to be on the album.

In the album announcement on your website, you say that “This record takes the listener on an unforgettable journey.” Was there a particular story you wanted to tell with this album?

I wouldn’t say there’s a particular story.. but we have gone through a lot in our personal and professional lives in the recent past.. I would say this, in a cathartic way, addresses all that and the emotional side as well.

Did you find yourselves exploring any different influences on this album than you have on previous albums?

I think without sacrificing the integrity of who we think Buckcherry is, a guitar driven rock n’ roll band, we explored some new (for us) technology, sounds, amps, and production. All the while, Plotnikoff keeping us in check so we stayed true to the BC sound.

Why did you decide to cover Nine Inch Nails’ “Head Like A Hole?” Is there something in particular that drew you to the song?

In my opinion, Josh sounds very natural singing NIN. Some of his tones and delivery are very reminiscent of Trent Reznor. We’re simply big fans of Trent Reznor’s, and have a lot of fun covering that song

Mike Plotnikoff, who produced your platinum-selling album, 15, returns for Warpaint. What was it like working with him again? What do you think he added to the album’s overall feel?

Not only am I a huge fan of his work, but he’s an amazing human being. We operate on the same wavelength. Nothing but good vibes every minute of that process. He brings a strength, power and precision to the sonic quality of this band, without losing the warmth and swagger. He brings the rock AND roll.

This year marks the 20th anniversary of your self-titled debut album. Looking back, how do you feel your music has evolved over the last two decades?

For me personally and as a guitar player, my playing has only gotten better. I love doing what I do just as much as when I started. I strive to get better and learn new things. This carries over into the songwriting, melodies, riffs, and even production.

From your first album to Warpaint, what do you feel is the most important thing you’ve learned when it comes to recording?

Be flexible. Leave your ego out of the decision making process. Oh, and save early and save often 😉

What are you most excited for fans to hear/see on your current North American Tour?

Well, the reaction to the new songs of course, but also to them to see how this new band delivers them. It’s no secret there’s some new players, and I can’t wait to get out there to have fun with all of this.

Is there anything else you think fans need to know about Warpaint?

Yes. We love you! Now go enjoy your fucking life 🙂