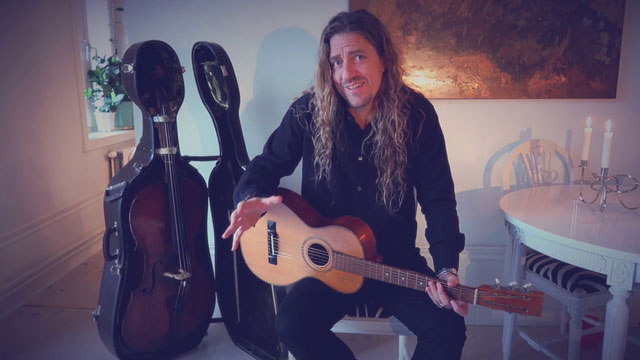 Between Avatarium’s new album, The Fire I Long For, to producing Candlemass’ first record in seven years, The Door to Doom, Marcus Jidell had an exciting year in 2019. We caught up with the guitarist/producer to discuss both albums, plans for this year, and more.

How would you compare The Fire I Long For to your prior efforts?

I think each album at the time are different from each other. But, I think this time we were able to bring a little bit more bluesy and even gospel elements. I think that’s the main difference. It’s also the production is heavier than previous albums, especially from our third album, Hurricanes and the Halos. We wanted to go back to the heaviness of the first and the second album with this one, but try to do it in a new way, so to speak. It’s a little bit more emotional. It feels like we managed to do it with more emotions than we ever did before. I’m really happy with this album.

How has the reception been so far?

I think it’s been really good so far. The album has been out for a bit now. I think, when fans start to tell each other about the album, it spreads mouth to mouth, as you say. I think, hopefully, it will continue to grow even more. But, it has been a really, really good reception, I think it’s the best reception we’ve received for an album, actually. We have won a lot of big soundchecks, and big magazines, and album of the month in European magazine. The reception has been overwhelming I would say.

Were there any songs that were more challenging for you to put together?

I think every song is a big challenge to make complete, so to speak. I can’t say. I think every song, in one way, a struggle to make it as good as possible. We worked really hard with every song. Maybe, some of the songs have been more enjoyable. I would say a song like, “Lay Me Down,” maybe. That was one of the last songs we wrote and maybe that one was written a little bit faster than the other ones.

What was your reaction like when you saw Candlemass nominated for a Grammy?

I was very surprised. I think we all were. You know, it’s not to be expected, kind of an underground band. And, of course, we didn’t think that could happen. We were all extremely surprised. Of course, also, very happy because it shows that you can work with music that’s not mainstream, and still get recognition. And, we were nominated in such a big thing, so I was very happy about it, being a producer of the album and everything. It’s a really big thing and I’m very surprised that happened.

What was your experience like producing The Door to Doom?

We worked quite hard with that album. We worked for a long time, I think we spent a year. We recorded it first with another singer, then Johan Längquist, the original singer, came back and redid all the vocals. When I thought we were done with the album, then it was like, “Okay…,” we got a call from Leif Edling. And he’s like, “Okay, there’s one thing we need to do, redo all the work.” It was an exhausting procedure, but it was also a lot of fun.  Candlemass is one of my favorite bands. They are extremely talented people. They know what to do, and they’re old-school jokesters. I always learn a lot working with these kind of people. But, me and Leif Edling, we’ve worked many times before. But, to me, it was an honor to produce Candlemass.

That’s a good question. We’re touring without a time limit. We’re going to play some shows in January, and we’re going to play some festivals in the summer. Maybe, we’ll do some touring in Europe in the beginning of fall. I’m working with some projects in my studio, some different things, as a producer. I’ll be working mostly as a producer. That’s what I’ve been doing the last two years. I used to be more of a touring musician, but the last two years I’ve been working very much as a producer, and I really like that. One of the reasons is, I had a son almost two years ago. For me, it’s a way to spend time with him and work in the studio, too. It’s amazing to be able to do two things that I really love. But, of course, I like to travel and do tours as well, but it’s nice to be able to spend time with my son. I’m happy about that.

Sounds like you have the best of both worlds.

Yeah, I’m a lucky guy that I’m able to pay my bills and still be home as a producer. But, I’m a guitar player in my heart, I love to play guitar. I’ll probably go out and tour again more, but you never know. Working in the studio involves a big challenge. I’ve been spending a lot of time to learn the craftsmanship of recording. Learning how to capture sounds, emotions, and how to work with people; singers, and musicians. I try to get the best performance possible out of people. You need to. It’s extremely challenging and interesting work, I would say.

Since we’ve entered a new decade, can you name a few bands or albums that stand out the most to you within the last 10 years?

The last 10 years? I can hardly remember any album this year. I’m a fan of Ghost, I can say that. I really like what they’re doing. I think it’s good to see a band that writes good songs and does good arrangements, and great recordings. That’s one of my favorite bands from the last 10 years. But, there’s a lot of great music that’s being released all the time. It’s just a lot of the time, I’m digging backwards. I listen to a lot of old blues albums and the blues singers, like Jimmy Reed and Muddy Waters, and the jazz recordings at the moment. Listening to Ella Fitzgerald, that kind of stuff. I think in one way, it’s easier to get inspired by old music because if you just listen to new music then there’s a big chance that you sound exactly like them.  I’m always trying to find my own voice. Robert Plant continues to do great solo albums. There’s a lot of great bands. I like Slipknot, Mastodon. There’s a lot of great bands. But, I mostly listen to other stuff and I listen to artists like Jerry Douglas, if you know him, he was playing with Union Station. I listen to so much music, a lot of classical music. I listen to so much, so it’s hard to name 10 albums. I can’t do that. But what I can say is I’m more interested in what’s going to come in the next decade because I think we’re hopefully moving into a new time, when people will record music in a more organic and human way. And not be too tied up by computers and machines. Go back to blood, sweat and tears. Music from the heart, and music that feels human. I think and hope that we will get more into that and that people would start to get a little bit bored with all the computer edits of music. Yeah, I think we’re moving into an interesting time. I feel that vibe when I see a lot of bands, anyway.

Yeah, because I think that’s one of the things with music. It’s supposed to be human and, for me, that’s such a beautiful thing, when some humans get together, perform music together, or perform art, or poetry, whatever. Because that’s when we’re able to reach some kind of higher level. You can’t use math in that sense, in these kinds of art forms. Because sometimes you jdo something that connects, and it brings out emotions. That’s when something great comes up. That’s one of the most beautiful things that humans can do. When I see people play and perform music and art together, I think that’s when we rise above the regular, being born and dying. I think it’s unique for human beings and it’s very important.

We are really proud of this album. Hopefully, we’ll be able to reach even more people with it. And people will be able to get connected with it in the same way that we do. I think if we continue to work with this band then, at one point, we have to go overseas and play our music and meet, hopefully, a lot of fans over there.