Greek symphonic death metal giants Septicflesh are gearing up for their upcoming DVD/Blu-Ray/CD of Infernus Sinfonica MMXIX, which is scheduled to arrive on July 31st via Season of Mist. This release consists of the group’s iconic performance in February 2019 at the Metropolitan Theater in Mexico City, MX, which included over 100 musicians from the Symphonic Experience Orchestra, the Enharmonía Vocalis Choir, and the National University of Mexico Children’s and Youth Choir. We caught up with guitarist Christos Antoniou to discuss the upcoming live record along with a new album update.

How are you handling the lockdown/quarantine so far?

Well, the lockdown, has been off nearly a month. It was okay, I didn’t face any issues. I was busy and had a lot of work to do. In Greece we took early actions for the virus and we didn’t face much serious issues.

Did you have some extra time to work on the Septicflesh release?

July 31st will see the release of INFERNUS SINFONICA MMXIX recorded in Mexico City last year. What will be included on this Blu-ray/DVD package?

How did you guys decided to record this show in Mexico? Why Mexico?

Because Mexico made the most serious offer that we got, in the past we got some offers from Europe that were not so serious. Mexico they were really organized, they had everything prepared really well. After the promoter approached us about making a live show in Mexico, I got to listen to the orchestra, the choirs, we didn’t face any issues at all, they were very professional and for us it was the right decision. Although it was very far, it proved that was a very wise decision from our side.

How difficult was it to put this whole show together? Do you get involved with the orchestra and the choirs?

Yes, for a year before the show I had the online session with the promoter who actually was a musician also in this, he helped me a lot, he was a member of the choir. He was sending me rehearsals from the kids, from the choir, from the orchestra. The technical parts that were for the audio and the visual aspects of the show. We had an extensive, cooperation in order to make this project alive, and everything was so smooth. We went to Mexico City a week before the show. We had five days, I think, rehearsals with the orchestra. In a way it was easy because they knew the songs they had rehearsed before and this made our lives easier.

So it was a seamless process for you guys and also for them.

Yes, because they are professional musicians, they perform concerts every week, and we were also touring in North America for a month and we were sharp in a way, we were in good condition and everything was spot on, we didn’t face any issues.

You were mentioning at the beginning of that Septicflesh is working on a new album. What can you tell us about this record, what are some of the ideas you’re working on?

Well, you know, we are nearly at the end and we try some new ideas to develop our sound and we are optimistic. We have a new label now. Nuclear Blast, a new start and a big step. Although it makes our life a bit difficult because Codex Omega was a good album and we were a bit anxious on how to overpass it. We work hard more than any other time. And we are confident that the result would be better than Codex Omega

I recall hearing that Septicflesh tends to use the orchestra of the city of Prague for album recordings, what made them special for the band?

Yeah, in 2006, I made my research and found a lot of orchestras, and this one from Prague for my opinion was the best, and since then we work a lot of projects together not only Septicflesh. I know the contractor really well, and when something works well, it’s a bit risky to change it. I could go to other cities with good orchestras also, but I prefer to stay somewhere that I know what to expect, and I know what the orchestra can offer me. Because it’s a difficult project to record with an orchestra and involves money. It’s better to be somewhere sure, that is the reason we choose all the time this orchestra.

What is the status of Chaostar?

Well, Chaostar was in 2000 and actually during the lockdown I revised the first album of Chaostar and will be released on vinyl this September, But a new album, I cannot say anything at the moment, you know. I’m focused on Septicflesh. I did a revision for the first Chaostar and we will see about a new album.

What can we expect from Septicflesh once we pass this dark times and when the new album will be released?

Hopefully in 2021 during the spring, we are out there. But, at the moment it’s difficult to be precise, you know, because, we are living these crazy times at the moment. We shall see. But, this does not take our will to process better. We have more to give, as I said, it’s a new era of Septicflesh with the biggest metal label, Nuclear Blast, it’s something that gives us a boost, and we are eager to tour again and to perform our new album to our fans.

Do you have any message for the fans of Septicflesh that are waiting for this live release?

Well, it was something that the majority of the fans of Septicflesh were asking for. Because we are a symphonic band and we didn’t have the chance until Mexico to perform with an orchestra. We did our best and I’m sure the result will please even to our most demanding fans. This was our best show ever and until the next one. 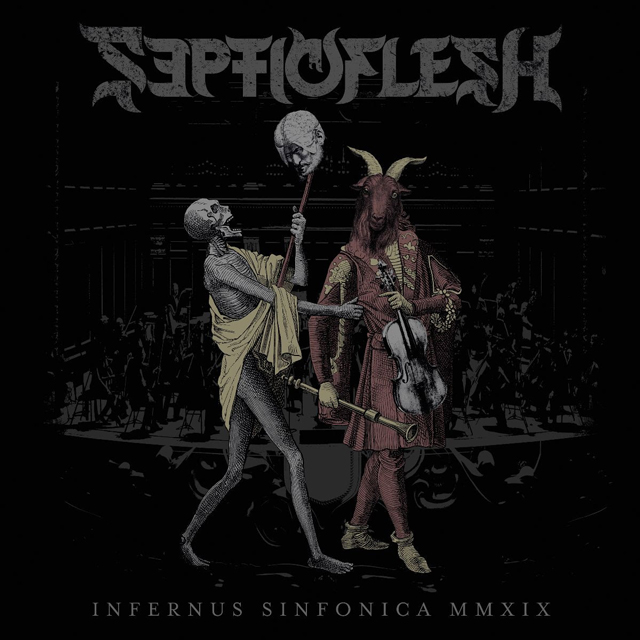