Before the entire globe was taken over by the COVID-19 pandemic, we caught up with Burning Witches vocalist Laura Guldemond on joining the band and the new album Dance With The Devil, which is out now via Nuclear Blast.

Can you talk about how you joined Burning Witches?

Well, all of a sudden I magically appeared when they cast a spell. I didn’t know what was happening. I all of a sudden was there. I was looking around and I was like, “Oh, what the fuck are all those girls doing here? I’m not used to all these girls being in a band.” And then I was in an all girl band. What actually happened was, I knew Sonia [Nusselder] and they needed a new singer, so Sonia said, well, I actually know someone that would probably fit the band very well. And yeah, they contacted me. I already played one time with Sonia and the band, so we knew each other a bit. She knew my voice. She knew how I dressed, she knew my musical tastes, it was easy.

How has the overall response been for fans accepting you as the new vocalist?

Overall, it’s mostly really good. I think because I expected worse. For example, so many things that happen in the history of bands that got a new singer so it could’ve been way worse. I think like 95% of people are pretty happy. Of course there are people that aren’t happy, but I’m really happy with how it went.

What was it like for you creating the new album Dance with the Devil?

It was really nice to do. It was actually not the first time I wrote with them because we already released the EP Wings of Steel. I already knew how it would go and that was nice. I knew what I could expect, but it was fun to do. They really gave me a lot of freedom. I could just fill in all the lyrics and vocal melodies every way I wanted. They just gave some feedback sometimes but it all went pretty smooth. We didn’t have a lot of trouble understanding from each other what we needed for the music, so it was pretty easy. Romana just sent me the tracks basically. Sometimes with just guitar. And I filled it in, recorded it at home, sent it back, waited for some feedback and lots of times it was okay. Sometimes they said, “Oh I’ll try this, maybe more melodic,” or whatever. And I tried some other stuff. So that’s how we did it and it’s worked very well. Then we got into the studio and recorded it. We finished all the harmonies and details because I didn’t really record everything I found, it was mostly… Yes, some harmonies I did try because I always like to try it from, and then we recorded everything together.

Can you talk about some of the lyrical themes?

Yeah, well I asked the whole band, because “Hey, I’m new, so what do you want me to write about?” And they all said basically the first answer was something witchy and something metal. So kind of what you already would expect, of course. So yeah, it was fun to do. For one song they asked me, “Okay, please really do this. We want you to write a song about the bands going strong and it was for Wings of Steel and for the rest they basically just let me do whatever I wanted. I brainstormed a lot of ideas. Every time I got a song in, I picked from a list, because I always like to have some ideas ready. I don’t really write anything upfront except for themes that appeal to me. Themes, or ideas, song titles. I wrote those down and I see whatever fits the song that comes my way, basically. Lala actually likes to write some of the lyrics and she gave me one specifically. It really appealed to me because it had the lyrics, “Come my child to the sea of lies. Drown your soul.”

She wrote those sentences, probably in a different order than I did. This is what “Sea of Lies” became. It’s about people who don’t feel a hundred percent confident. It doesn’t really matter how exactly, but those kinds of people are prone to be a victim of people that know that this is a weakness that I can use. So that they can use people. And you know, the classic example is in religion where they let you pay to get rid of your sins or whatever. It could be in daily life with a partner or maybe at the job. It could be in any situation basically so I really loved this very human subject. I thought it was really cool to write about. So I kind of stole the chorus lines from her and then I wrote the rest around it cause she also had something but it didn’t really fit my usual style. I changed that a little bit. I basically wrote her first song in my own words and I really liked that idea.

And then, for example, “Necronomicon” is inspired by H.P. Lovecraft, it appealed to me so much. It’s a book that people believed to be real. And at some point library cards could be found in libraries, but the book was never there because everyone thought it was a real book, but it just wasn’t.I think that’s a really cool one. Of course, H.P. Lovecraft, very well known horror novelist, a legendary guy. And this specific story appealed to me a lot. So I also wrote a song about Necronomicon. I like to get inspired by everything that grabs me in a way and just put it in there.

Of course there are a lot of witchy teams. For example, “The Sisters of Fate” is about three witches in Greek mythology. They share one eye between each other and can see when someone lies. I just did a lot of research on it because I like weird stories. I like science fiction and fantasy  a lot. It was fun to research and write those crazy songs about it. And there are also some songs that are very personal, like “Sea of Lies,” because some people in the band have these problems with friends, you know, very close. They could see what had happened and it wasn’t fun.

It’s great they gave you a lot of creative freedom around the new album and let you circle around different subjects.

They really trusted me to understand the concept. Everyone’s happy now, so .

What was the experience like for the video Dance with the Devil?

I was in a band before, of course. And the funny thing as things are very well arranged. I mean I don’t really have to arrange things myself and so the experience for me is nice. I can just get dressed up, show up, pretend I’m singing or actually sing when the camera’s running, make some crazy faces and I don’t have to think about a lot of other things. Which is really nice because previously I would actually do a lot of things also in my band. So for me it’s a gift. And I actually prefer that because I don’t like being stressed all the time. If I have to arrange a lot I can, but I’m stressed and now it was a much more relaxed process for me. It was fun.

Are there any songs on the album that were more challenging for you?

It’s more like the energy it needs sometimes because “Dance with the Devil,” the chorus is long and they’re high all the time with a lot of distortion. So it takes me a lot of energy. So the height is no problem, but the amount of energy it takes, I have to practice that actually. It takes a lot of energy and you have to keep it on this high level energy all the time. And that’s what makes it difficult. So, I think for me the most difficult song is “Dance with the Devil” because of the energy my voice needs during the courses. But I’m sure live it will be fine, because you see the people, it’s a fun song to have fun with and I’m sure it will be easier live because it’s easier to give the amount of energy.

Do you guys have any touring plans later this year? Any chance for booking a US tour?

Booking a US tour? Yeah, we really hope so. We need a really good opportunity as a good support act. You know, if you can be a good support band for, for example, Power Wolf or I don’t know, maybe for Steel Panther, I think it will be possible. But you just need the contacts. I hope I have it. I have to wait for that and there needs to be the opportunity. So if it’s not there, it won’t happen. It’s basically up to having the right contacts and do they like you enough to get you on the tour too. It’s all a combination. I think the funny thing is I noticed last year when we played a festival, we opened up for the festivals a lot and sometimes the first day, sometimes third or second day. The funny thing was we were one of the first bands, but when we played it was packed. So people I think are very curious to see us and for a headliner it’s, yeah, probably fun to take us with them because basically when we are playing people just think,” Oh and all girl band. Yeah. We have to see that one time at least.” So I think it would work very well for almost any band that’s at least melodic metal, because people are always curious about us. But yeah, we would never be able to do a headline tour ourselves yet in America. So we will have to have the opportunity to go with a bigger act.”

That plan works. There have been bands like Sabaton. They were an opening band for a while and suddenly they had a successful U.S headlining tour. It happens and seeing you guys open for Steel Panther. That would be interesting.

Yeah, exactly. I mean I was thinking about that because the previous interviewer asked me “Oh, who would you want to tour with?” And I was like, “Yeah, probably one of the bands I like to see myself, so maybe Wasp or whatever.” Of course it would be a super funny tour. I think it needs to happen at some point because it’s definitely interesting.

I think we are writing again this year. I will hopefully go to Croatia to write together with Romana and maybe some other band members will be there too. I’m not really sure yet. And yeah, the nice thing in Croatia, the family, so we can basically sit there and be on holidays, write something, and relax together while doing it. Because this time, of course I just started and I can’t go over all the time to Switzerland because I also have my life here. We probably have some time in autumn to start writing again and do this together this time. But it’s pretty cliche, but to our fans, we love you. Without you, this couldn’t be possible, so thank you very much. 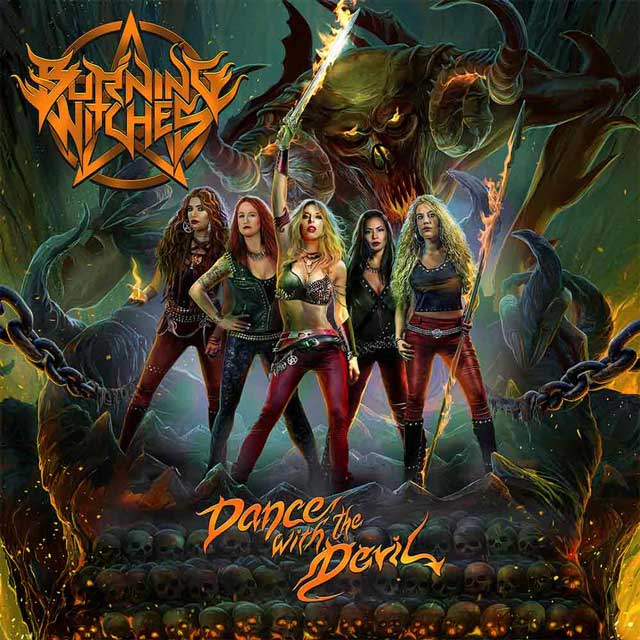 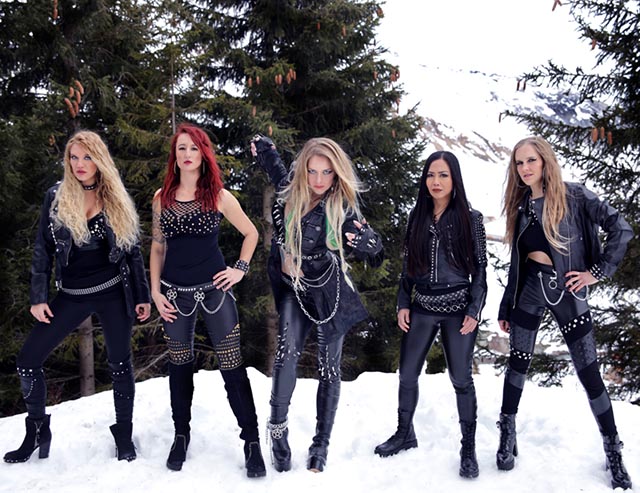