After either a legitimate accident on the official website, or a very orchestrated intentional hint drop, last Friday we were given Guns N’ Roses as the first headliner to perform at Louder Than Life this upcoming September.

With rumors buzzing for months about potential bands on the bill the masterminds at Danny Wimmer Presents have set our minds at ease today.

Announced earlier this morning, the fifth annual Louder Than Life will take place this September 27th, 28th & 29th. Finding a new home with Highland Festival Grounds at KY Expo Center, after the total loss of the festival last year due to flooding at Champions Park, promoters made good on their promise to make it bigger and badder!

This years Louder Than Life will feature over 50 musical acts on three stages including A Day To Remember, Ice Cube, Marilyn Manson, Breaking Benjamin and many more along with bourbons, whiskeys and food.

The current music lineup for Louder Than Life is as follows (subject to change):

Louder Than Life tickets, VIP and camping options are on sale now starting at $69.50+fees for single days tickets or $149.50+fees for the entire weekend.

Visit the official site www.louderthanlifefestival.com to purchase tickets and keep up to date on changes or additions. 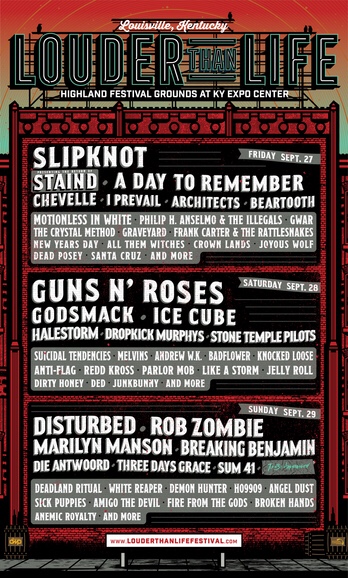