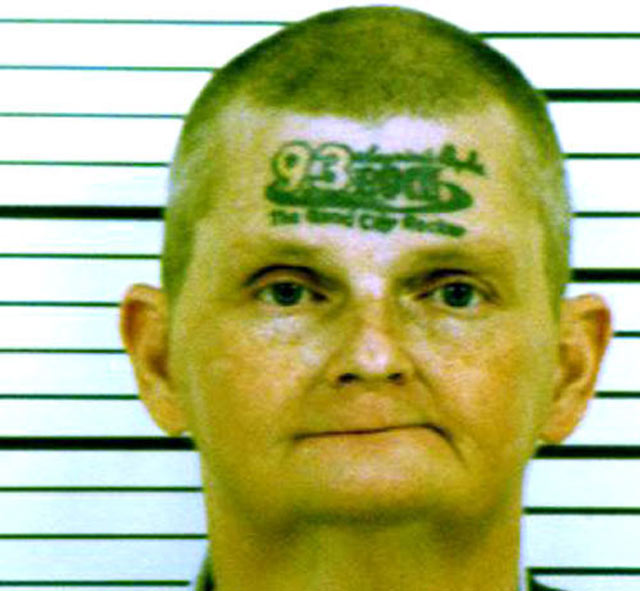 David Jonathan Winkelman saw a huge payout in 2000 when his favorite radio station KORB offered six figures to get the station’s logo tattooed on his forehead. So he and his stepson ran out and got “93 Rock, the Quad City Rocker” permanently inked on their foreheads. Upon arriving at the station, they were informed that it was a wacky radio station practical joke and they weren’t entitled to anything. Winkelman sued the station’s owner, but eventually dropped the case.

Why are we writing about something that happened a decade ago? Well, The Smoking Gun brought it to our attention that the 48 year-old Winkelman was recently arrested on a misdemeanor charge of operating a motor vehicle without the owner’s consent. That wouldn’t have mattered if he didn’t have a dumb tattoo of a radio station on his forehead, but his arrest is a good opportunity to show off his mugshot and note two things: first of all, the tattoo hasn’t held up well at all. And we’re not sure what Winkelman looked like when he got it, but it’s safe to say that he likely hasn’t held up well either. Secondly, the tattoo has lasted longer than the station. It changed formats and is now Star 93.5, an adult contemporary station playing “today’s best variety,” (which apparently was Barenaked Ladies’ “One Week” when we checked their site). We’re guessing they won’t be offering any listeners to get tattoos…