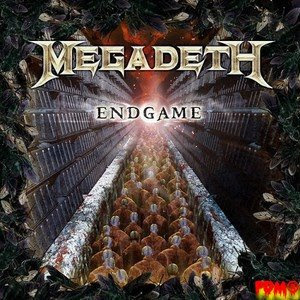 Metal By Numbers is a weekly column in which we look at the top metal sellers and debuts of the week as well as what’s getting played at Metal radio courtesy of radio trade magazine FMQB, whose metal panel consists of about 80 college and commercial stations that have metal shows, as well as SiriusXM, Music Choice, and more.

What a ridiculous week for metal! It’s been a while since a metal album debuted in the top ten, and it’s pretty great that Megadeth’s epic Endgame is the record to do it. But that’s just the beginning. Shadows Fall, Every Time I Die, Porcupine Tree, Ace Frehley, and even Dying Fetus get in on the act in the top 200. At FMQB, Shadows Fall are most added, while Black Dahlia Murder and Assjack invade the top ten.

Megadeth, Endgame (Roadrunner) #9, 45,000 sold
That this is Megadeth’s best album in years might have something to do with their awesome debut. This is a victory for pure metal everywhere.

Porcupine Tree, The Incident (Roadrunner) #25, 17,500 sold
The prog/metal band’s Roadrunner debut is extremely solid for a band that doesn’t write radio songs. They’re the kind of band that doesn’t have any casual fans – the people that bought this album were probably lined up outside the record store or clicking on the pre-order as soon as they found out about it.

Ace Frehley, Anomaly (Rocket Science) #27 17,000 sold
KISS’ original guitarist has a solid debut. And aging metalheads have a new CD to put between his 1978 solo album and their Frehleys Comet albums.

Shadows Fall, Retribution (Everblack Industries/Ferret) #35, 13,000 sold
Between Megadeth and Shadows Fall, and the two guys below, this might be one of the most metal top 50s in recent history. Great first week for another band that have their own label. And like Megadeth, it’s one of their best albums in a while.

Every Time I Die, New Junk Aesthetic (Epitaph) #46 12,000 sold
The Buffalo band’s fifth album is definitely an impresive start for them as well.

Thrice, Beggars (Vagrant), #47, 11,700 sold
Not super metal, but this is interesting enough to write about. This number is only the number of physical copies it sold. The digital copy has been out for a few weeks – pushed up by the album leaking. The album’s already at 26,000 sold.

Living Colour, The Chair in the Doorway (Megaforce) #159, 2,800 sold
Speaking of albums that probably won’t go gold. In their defense, it’s been years since this once-amazing band put an album out. Haven’t heard this one, but if it’s anywhere near as good as their three albums, it’s probably still great.

Dying Fetus, Descend Into Depravity (Relapse) #166, 2,700 sold
This is pretty awesome! Definitely the most metal top 200 in a while! And pretty fitting that their chart position ends in 66!

It Dies Today, Lividity (Trustkill) 1,800 sold
The time away doesn’t seem to have done the band that much good. It’s not the most amazing debut.

The 69 Eyes, Back in Blood (The End) 1,500 sold
You haven’t entered our contest to win a coffin box set of this album yet? What are you waiting for?

Anvil, This is Thirteen (VH1 Classic) 1,400 sold
This is probably more than Anvil’s albums between Metal On Metal and the release of the documentary Anvil! The Story of Anvil sold combined.

After the Burial, Rareform (Sumerian) 600 sold
This is a re-recorded version of their debut album, that came out all the way back in 2008. WTF?

Chickenfoot, Chickenfoot (Redline/Fontana) #114, 4,300 sold
I’ll bet a lot of people that picked up the Ace Frehley record already have this in their collection.

Killswitch Engage, Killswitch Engage (Roadrunner) #184, 2,500 sold
This is about what they sold last week, so if they can stay at selling 2,500 every week, that’s not a bad place to be.

Slipknot, All Hope is Gone (Roadrunner) #198, 2,300 sold
As MetalSucks pointed out in their chart recap, at 826,000 sold, this is only a special edition away from going platinum.

3 Inches of Blood, Here Waits Thy Doom (Century Media) 1,000 sold
This band might have only sold about 3,500 in two weeks of their third album, but they’ll live and die by the road, where people will be blown away by their live performance.

Bring Me The Horizon, Suicide Season (Epitaph) 750 sold
Things are starting to slow down a bit for these guys, who were selling 1,000 copies of their album a week without fail. At 72,000 sold, it’ll probably be close to 80,000 by the time the album reaches the one year mark two months from now.

Attack Attack!, Someday Came Suddenly (Rise) 650 sold
A 20% drop off from last week suggests to me that some people have wised up.

Ensiferum, From Afar (Spinefarm) 500 sold
Does pagan metal sell? 1,500 in two weeks isn’t all the impressive given the hype and exposure these guys have gotten.

Municipal Waste, Massive Aggressive (Earache) 475 sold
If I ask you what you think of this record, and you say you don’t like it, you’ve got the wrong answer.

Iwrestledabearonce, It’s All Happening (Century Media) 450 sold
I wrestled a beer once. I won.

Threat Signal, Vigilance (Nuclear Blast) 450 sold
Do I have to pretend I know anything about this band? No? kthx.

Divine Heresy, Bringer of Plagues (Century Media) 400 sold
Dino Cazares wrestled a pig once. Then he killed and ate it.