“…If we can’t live in peace then let us die in peace…”, comes the voice of cult leader Jim Jones from the now infamous final audio of Jones addressing his tribe before committing mass suicide (and in some cases murder).  This sample is how the debut album, All Hell’s Martyrs, from Dublin’s Dread Sovereign kicks off.  Frankly, it’s a ballsy move.  If you’re going to start your album with an excerpt from one of the most bone-chilling speeches in recorded human history you better damn well bring the goods when it’s time to plug the amps in.  For Dread Sovereign, it’s mission accomplished.

There was a time in metal history when doom metal was simply an extension of what we now dub “traditional metal”.  Before we became too worried about a convoluted labeling system for our favorite bands, metal existed as metal.  Period.  Dread Sovereign still live somewhere in that wormhole when metal was metal and everything else was for Poseurs and Falses.  The distant musical cousins they most closely resemble would probably be Candlemass and Trouble but it’s hard not to hear the influence of artists like Pagan Altar, Saint Vitus and Witchfinder General as well.  Again, metal was metal, and so is Dread Sovereign.

For the sake of conventional tags this band is doom metal.  Now there’s doom metal and there’s doooooooooooom metal.  Dread Sovereign would more closely resemble the later.  Their dirge fueled sound is filled with massive, chunky riffs that are dragged and stretched, note by note, with deadly precision.  The rhythm section rumbles like a million thunder bolts.  Meanwhile the vocals are a brilliant throwback to an era when you didn’t have to growl or swallow your mic whole to get your point across.  In fact, the vocals are easily one of the best parts of this album as they are delivered with amazing authority and vigor.

The beauty of Dread Sovereign though lies in their ability to craft immense and towering sounds in a variety of ways.  Whether it’s the relative quick (six minutes) track, “Thirteen Clergy” or a 10+ minute opus like, “Cthulu Opiate Haze”, this band has the underrated knack of knowing when a song has run its course and when it needs to be further explored.  Don’t count that trait short.  Too many doom acts these days have listened to one too many drone albums and think that longer automatically equals better.  Wrong answer.  ‘Leave ’em wanting more’ is a mantra for a reason.  It works in general and it certainly works here.

2014 has been a phenomenal year for doom so far, following a killer trend in the metal world lo these last 5-7 years.  I don’t know what’s in the water from the U.S. to Scandinavia to the Emerald Isle to just about every corner of the globe but we’ve been blessed with some great stuff.   Maybe it’s the tears of a million mothers who can’t feed their babies?  Maybe it’s the blood shed by millions of miles of strife and struggle?  Regardless, Dread Sovereign have drunk deeply from the chalice of human misery to churn out one of the best doom metal albums we are going to get this year.  It’s a singularly depressive masterpiece worthy of both your time and the tiny fragments of your happiness it’ll chisel off with each listen.

All Hell’s Martyrs is out on March 21 via Van Records.  You can give them a trial run by checking out the track “We Wield the Spear of Longinus” over at the Dread Sovereign Bandcamp page. 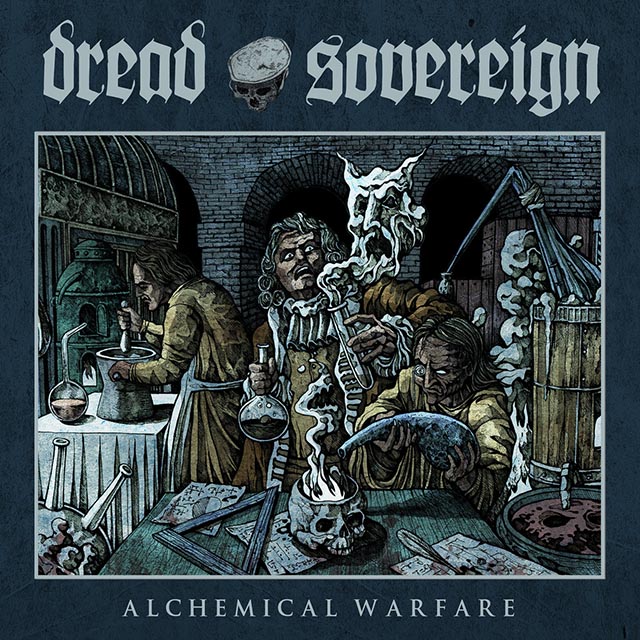