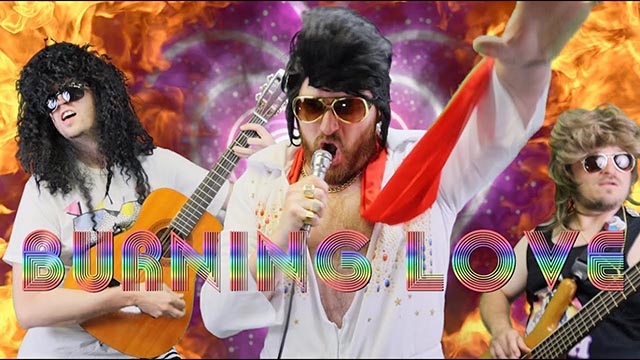 Dangerville Productions are on their next cover, and this time, they teamed up with Metal Insider to premiere a video for their rendition of the Elvis classic, “Burning Love.” Dangerville owner, Ross Morgan, invited Tony Piccoli (Imminent Sonic Destruction) on guitar, Nick Hagen (Entransient) on acoustic guitar, Matt Schrauben (Entransient) on bass, Kevin Schaner (Holloway) on Keys, and Jake VanRavenswaay on Choir Vocals to collaborate on this track.

“It has always been my dream to dress up like the King of Rock and Roll and pour beer all over myself. Nick, Matt, Tony, and Kevin made that dream a reality. Seriously though, it was one of the most fun projects I’ve ever pull together.”

“I’ve never felt more alive than I did the day I wore the zebra striped pants. This project was a blast from the start! Ross had a great idea and vision for the cover song and video, and I think it couldn’t have come together better. I was even bleeding during the making of the video because I was rocking too hard, which says a lot for me!”

“Originally, Ross was going to get someone else to play bass on this, but couldn’t get them to commit. Then Nick texted me one day asking if I wanted to record bass for an Elvis cover with Ross. I was like, ‘sure, that sounds pretty fun.’ He neglected to tell me it was for a video in which I’d have to dress like a fool and make an ass of myself. Had I known that I would have said ‘Fuck Yes!’ It was a blast.”