Comedy and punk rock go hand in hand. Many a snotty punk rock band’s lyrics or onstage demeanor are steeped in having senses of humor. But how far is too far? Maybe entertainers should think a bit before saying something that could ruin their career. We’ve already seen Roseanne Barr essentially kiss her career goodbye after her highly offensive racist Twitter post, leading ABC executives to almost instantly pull the plug on the reboot of Roseanne. With that said, NOFX’s 35 year career could come to an end after their recent show at the Punk Rock Bowling & Music Festival in Las Vegas, NV this past weekend on the 27th.

While the group is known to unapologetically offend everyone, which was ironically part of their charm, these punk rockers went overboard with some comments during the show. During their performance, the following dialogue between frontman/guitarist Fat Mike and guitarist Eric Melvin happened:

Fat Mike: “We played a song about Muslims and we didn’t get shot. Alright.”

Eric Melvin: “I guess you only get shot in Vegas if you are in a country band.”

Fat Mike: “You know that sucked, but at least they were country fans and not punk rock fans.”

After noticing the crowds disapproval, in the below clip, you hear members of the band saying “Did I offend somebody? I can’t fucking believe it.”

It’s obvious that they were trying to make light out of what happened on October 1st, 2017 in Las Vegas, NV. The horrific shooting when an armed gunman killed 58 people and injured over 850 people at the Route 91 Harvest Festival. However, what they didn’t realize is, there is no light to be made of that horrible incident.

NOFX hasn’t apologized for what was said, however, many are done with them as it doesn’t look like Vegas will welcome them back anytime soon. The organizers of the Punk Rock Bowling Festival have issued a formal apology while the The Blast has reported Stone Brewing, the company that manufactures the band’s beer and sponsors its music festival have severed all ties with them.

“We at Stone Brewing are aware of NOFX’s insensitive and indefensible statements this past weekend. As a result, we are severing all our ties with NOFX, including festival sponsorship and the production of our collaboration beer.”

UPDATE: NOFX shared a brief apology and are currently working on making it more formal.

“I can’t sleep, no one in my band can. What we said in Vegas was shitty and insensitive and we are all embarrassed by our remarks. So we decided we will all get together to discuss and write an in depth, sincere, and honest apology because that’s what the people we offended and hurt deserve.” 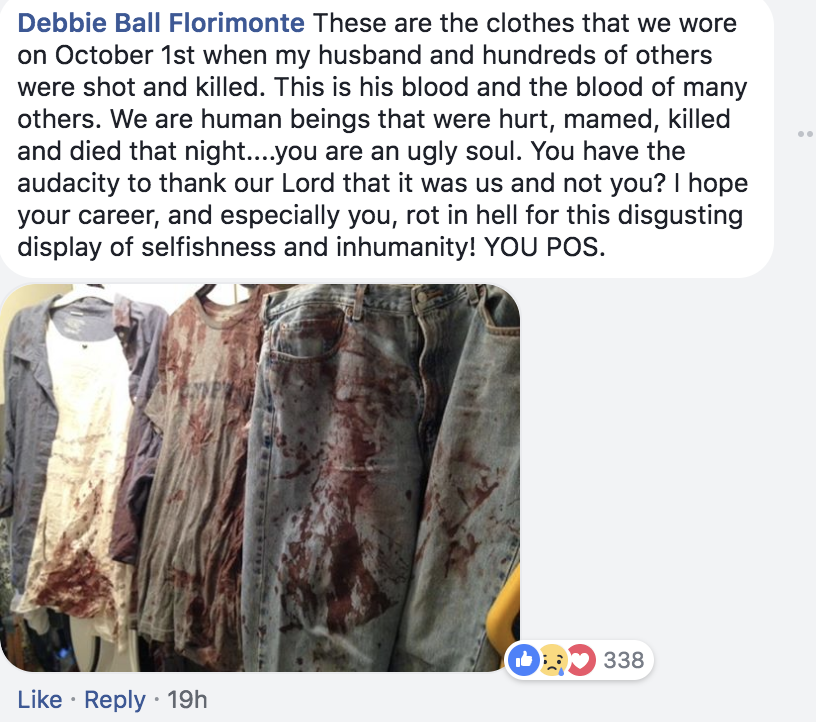 NOFX thought it would be “hilarious” to joke about the October 1 shootings while on stage in Las Vegas. They said “at least they were country fans and not punk rock fans”. This is disgusting and callous. We will never support anything involving this band ever again. pic.twitter.com/am3R8QJIE6

Fuck @NOFXband. SO punk rock of them. They have the right to say whatever they want; but, #Vegas has the right to make sure #NOFX is never welcome there again. #KickRocks #Route91 https://t.co/uhocbfIsKz

Official Release from @StoneBrewing: Stone Brewing will severing all business and sponsorship ties with NOFX. Their collaboration beer (that is already on the shelves) will have 100% of the profits donated to @LVMPDFoundation for trauma counseling. #VegasStrong pic.twitter.com/Rl41NmjC8Z

Shout out to everybody complaining that NOFX mocked the Las Vegas shooting victims when our government openly mocks shooting victims by never doing a single fucking thing to stop senseless violence. But, hey, at least you got to shit on a dude named Fat Mike.

Dear #NOFX you’re not funny and until you’ve had to run for your life while being shot at for ten minutes, you have no right to utter a single word about that night! Please don’t return to Vegas.

When has punk rock ever apologized for anything? If you’ve NEVER seen a NOFX show you have no business criticizing them. It’s a joke. Albeit a bad joke in poor taste, but a joke. If you didn’t/ know that, then go back to seeing Nickelback live.

EXCLUSIVE: Stone Brewing, the company that manufactures NOFX’s beer and sponsors their music festival, is cutting all ties with the band in the wake of onstage jokes about the Las Vegas shooting. https://t.co/TzvI4rv5gj

You know, I never in my life thought I’d see NOFX go viral on twitter

Thank you @StoneGreg for cutting ties with NOFX! Stone has always been a world class organization and this further solidifies that fact. #VegasStrong pic.twitter.com/FblCgPliv5

If you’re looking for quality, hate-free punk rock to listen to, DM me. Throw away your NOFX records, please. Dump the fucking rubbish.

WTF is wrong with NOFX and Fat Mike’s racist Islamophobic rants? What an absolute fucking asshole. Ruined our night, dick

To this band NOFX who thought it ok to make a joke like this about the 58 killed and more than 500 wounded on #OneOctober I say this: go to Hell. Don’t come back to Las Vegas. .@News3LV #countryfans #CountryMusic https://t.co/5VoVwwsXxL

“Can you believe what NOFX said!!!” Yeah, yeah I can. they’ve been ruffling feathers for over 30 years, so yeah.

If you haven’t seen these horrible comments from NOFX about the Oct 1 shooting please watch the video and we ask you to please pull Punk in Dublic from Las Vegas shelves.

Just read about your bad joke lvprb, been a fan 4ever brutha, your an icon, great song writer, funny as fuck, but the shooting joke was damaging. I lost a friend in that shooting, an apology is needed my man, to my city. Don’t you own a home here? Love you bro, mistakes happen.