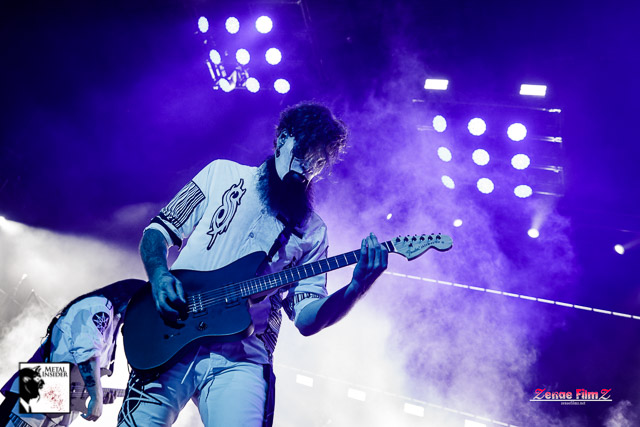 Slipknot’s guitarist Jim Root has an interesting story to tell about his musicianship. He doesn’t practice, he doesn’t touch his guitar except on special occasions. We will let him explain. In an interview with Guitar Interactive Magazine, Root elaborates:

“I play guitar but don’t consider to be a guitar player. There was a time in my life where I wanted to be like John Petrucci, Yngwie Malmsteen, Paul Gilbert-style shredding guy. But I had very few, I had one Satriani record, maybe one Racer X record, maybe three Yngwie records. After a while, I just go, ‘I need a song.’ It’s gotta be a song for me. But that’s what I like from some of those early records from those guys, they were singing with their guitars. I like rock ‘n’ roll, I like the melody, the vocals that have a raw edge to them, I’m fond of that kind of stuff. I’m caught between all these different things.

I’m very lazy also, so I don’t practice. Unless I’m on stage, I don’t touch the guitar. Or unless I’m writing. I never sit down. I go through these love/hate phases. So when I am wood-shedding is basically me sitting back on the porch of my house, through a little practice amp, and I’ll just sit there for hours and play. And I realize if I did this every day, I would probably be really good. But I still don’t know what I’m playing, I don’t know the theory, and this is why I never do clinics… After 20 years of touring, sometimes I don’t even want to look at my guitar. But then this love/hate relationship, I would get a new guitar.

I just bought the new Charvel model – one humbucker, a single-coil, Floyd Rose… it reminds me of the guitar I owned when I was 15. I got that guitar, put it back home, set up my gauge strings on, tuned it down, did all that business with Floyd Rose, polished the frets, adjusted the truss rod… And I got it set up, and I was like, ‘Wow, that was really fun. I haven’t set up a guitar on my own in years!’ I was sort of in this zen state while I was setting this guitar up. All I wanted to do is just sit down and play it. And then I realized if I put my energy into this rather than sit on my ass and play Xbox, I’d get more work done.”