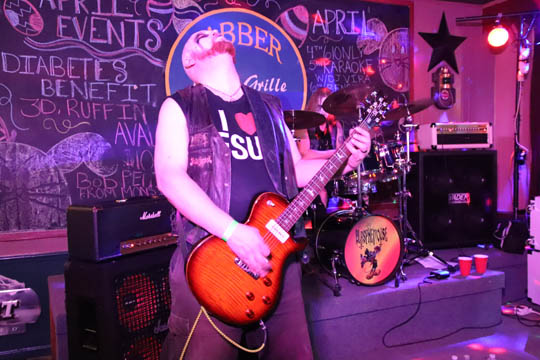 Taake t-shirt?  Check. Shining CD to listen to in the car?  Check. Behemoth jacket?  Check. And with that, I left the house to head up to Jabber Jaws Bar and Grille in Allentown, Pennsylvania to experience, Finland’s Horna.

In case you didn’t know, there’s been some controversy about this band. As a Norwegian black metal guy, I don’t know that much about the Finnish scene, but nonetheless, I listened to some of their songs on Spotify and decided to check them out in the flesh.

If you’re looking for some salacious story about Nazis, and crypto-fascism, you’re going to be disappointed. What I experienced at Jabber Jaws was a large group of metal fans (from various walks of life) coming together at a really cool local bar in a charming working class neighborhood to listen to some well crafted extreme metal music.

Certainly, as someone who lost family members in the Holocaust, I’m concerned about Nazism. With that being said, it’s important to reserve the term “Nazis” for actual Nazis, lest the term lose its meaning. Sadly, it appears that loss of meaning has already happened. What I experienced at the Horna show was certainly an anti-Christian display…  but Nazi or fascist assembly? Hardly. One Horna member wore a shirt that said “I Love Jesus,” which was obviously tongue-in-cheek, and there was a great deal of anti-Christian imagery on the band members, but that was the extent of it. There were no chants of “Sieg Heil” or anything in that vein, much to the chagrin of Antifa. It is also important to note this was hardly an exclusive Caucasian audience that came to see the performance.

What I did see were a bunch of people who loved metal having a good time in a neighborhood bar with the talk in between sets relating to the spanking the Phillies were receiving that night at the hands of the Washington Nationals or about other local metal bands to check out. Some people also ate french fries and sandwiches.

Certainly inspired by punk with a great deal of tremolo picking, Horna proved to these Pennsylvania fans in attendance that they were a powerful live band. Which, after all, is why Horna actually came to tour the United States in the first place. Horna ripped through about nine songs, much to the delight of the crowd. An intimate venue, fans were able to see the band extremely up close and very personal. Considering the venue and the equipment, the band sounded great, though they were clearly limited in the amount of stagecraft they could have on the rather small stage.

There were some Antifa protestors outside of the bar prior to the performance. And they certainly have the right to peacefully protest. There were no confrontations. In fact, a lot of the fans at the show were smoking outside right near the protestors with no incident at all. The protestors actually took off shortly after the beginning of the set as they came to realize that there was nothing to actually see there except a metal band playing a set from Finland and some local friends getting together. End of story.