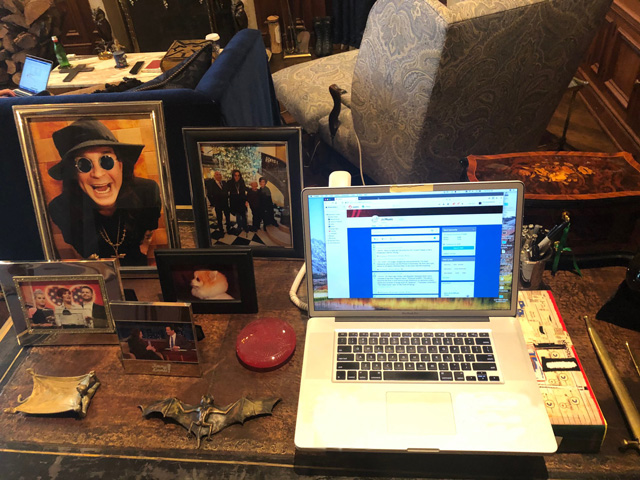 Ozzy Osbourne recently set up a Reddit AMA as he let his fans ask him just about anything from socks, his perfect breakfast, Aliens, to his new solo album, Ordinary Man. Metal Insider looked through the Q&A and gathered twenty of our favorites.

01) On his new album sounding like a personal farewell to his fans:

“After my neck surgery I was feeling pretty down so I was not going to write how happy I was being in agony. So it wasn’t an intention do that, it was mistaken as I am going to do another album next month.”

Later, he elaborated on his plan to record another solo album:

“I am making another album because while I can’t tour, I can make music. What I learned from Ordinary Man, it got the juices flowing again. People say they write the best songs when they’re unhappy, and I was unhappy last year. I don’t have a favorite song from Ordinary Man because I was writing a new song every day!”

“I have a massive selection of crazy socks. I don’t like plain socks – no brown. I like to have some crazy shit on there like “fuck off” on the side.”

03) His experience working with Elton John on the title track:

“He’s been a family friend for many years. The song “Ordinary Man” reminded me of Elton. I asked my wife if he’d be willing to play on it and she said “give him a call, he can only say no!” and he said yes.”

04) Thoughts on fans getting Ozzy tattoos:

“For one, I’m flattered. Honored. But it’s there for life, and it makes me feel a little uncomfortable. It’s a bold statement to have my name or face on their body forever. When they’re old, will they regret it? People are getting a lot of tattoos nowadays.”

05) Q: Since you have drank with Andre the Giant, are the stories of his ability to put them down true:

“Fuck yes. He would drink vodka and cranberry in a jug and would drink a 6 pack of beer while we waited for the jog to be made. He would rink & drink and never get drunk.”

06)  Q: When you think about Lemmy, what’s the first memory that comes to your mind:

“His apartment. Lemmy to me was the ultimate metal guy. He lived it slept it. He wasn’t one thing and then another. He was Lemmy on and off stage. What a nice guy he was.”

07) Q: Out of all the young bands to come out within the 21st century, who’s your favorite:

“I don’t really know. I don’t really listen to the new stuff, it’s not “new” it’s rehashed, but I loved the new Marilyn Manson. When I like something, it comes out in some way in my music.”

08) On the inspiration behind “Scary Little Green Men” and the Jason Mamoa music video:

“Aliens! If we think we’re the only living thing in the universe, we’re all fucking mad. There has got to be other life out there, why should we be the only planet with life?”

09) Q: How are you still with Sharon what’s the secret:

“I’ve not been the best husband in the world, I have my moments. But there’s only ever been one woman I’ve really loved. To put up with me and my fuckin ass, she’s gotta be special.”

10) Q: What other careers did you consider before getting into music:

“When I was in school, I had a lot of 9-5 jobs and someone told me I wasn’t born for a 9-5 job. The music industry brought me everything.”

11) Q: Are you still in contact with the other Black Sabbath members:

“Yes I talk to Tony regularly. He’s been so supportive over the last 12 months and I’m forever in his debt”

12) Q: Is there someone that you’ve always wanted to collaborate with on a song? Why:

13) Q: How was it playing Bark at the Moon during an actual eclipse:

“It went dark and light all during a song. The one thing I noticed was all the birds stopped. It was really trippy.”

14) Q: If you could go back in time and change just one thing what would it be:

“I would make sure Randy never got on that plane.”

15) Q: Who inspired u growing up and which LP was/is your favourite of all time:

“Anyone of the Beatles albums after Please Please Me! Dark Side of the Moon, Ziggy Stardust.”

“Dark Side of the Moon, The Wall or Obscured by Clouds”

18) Q: What’s some music you listen to, that might surprise people:

19) Q: What’s something you wish people knew about you:

20) Q: If you could have any superpower what would it be:

“Have the power to make world peace.”