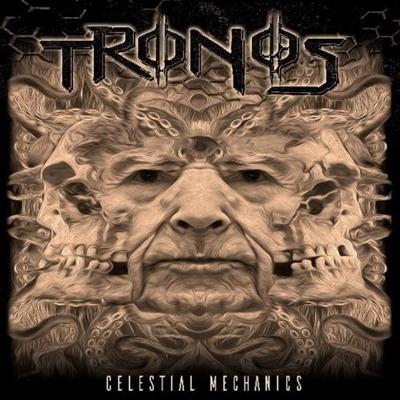 Thus far 2019 has been a year of incredible releases, with clear winners from bands like Vltimas and Misery Index just to name a couple.  Tronos, a new band comprised of Napalm Death’s Shane Embury, Megadeth’s Dirk Verbeuren and legendary metal producer Russ Russell, adds to an already epic year of metal releases with their masterful Celestial Mechanics (out April 12th via Century Media).

The early buzz around Celestial Mechanics was that it was going to be a psychedelically infused batch of doomy sludge. Indeed, those who love doom-ridden sludge are not going to be at all disappointed. At the same time, there are some clear tangents from that formula that make this record such as a surprise and delight for the even most hardened doom listener.

“Walk Among the Dead” is a sludgy, hefty tune that sounds a bit like Cathedral meets the Melvins meets Big Business. This track is going to bring you back a bit to the 90’s when the heavy bass sound under noisy guitars was en vogue. Those weren’t bad days.  Likewise, “Judas Cradle” has an epically deep bass and guitar intro that broods along, darkly. Vocals come along with some dark synth and an almost gothy-like delivery but over some impressive double bass drums. The track picks up tempo quickly and the bass work really starts to shine. In fact, I adore the bass sound on this entire record which is provided by guests like Dan Lilker (Nuclear Assault) and Billy Gould (Faith No More). Bass wizardry, at a slightly faster pace is also apparent in songs like “The Ancient Deceit.”

“Voyeurs of Natures Tragedies” and “A Treaty With Reality” are a bit more ambient and doomy, showcasing that Tronos is not beholden to one particular style or one particular sound.  There is, indeed, some diversity on this record and different members of the band get to shine in different selections.  What I love about this record is that the band clearly thought a great deal about track placement and the listener might get lulled a bit with the atmospheric middle sections and then get walloped immediately afterwards with a track like “Birth Womb” that leans heavy into the realm of a band like Mastodon (not surprisingly, Troy Sanders is one of the many key guest contributors to this record).

Overall, if you miss Cathedral as much as I do, Tronos is for you. Additionally, if you love that dark, doomy sound, but certainly turned up tempo just a bit, Tronos is for you. Honestly, I wasn’t sure exactly what to expect when I first got this record, but I was certainly pleasantly surprised with what I heard. There is not any doubt that Tronos put a tremendous amount of care and craftsmanship into their compositions. Nothing comes off like an afterthought. And while the Cathedral worship is apparent, Tronos is, by no means, a clone or anything close to resembling such.

Celestial Mechanics is a must-buy.  You can order it here.