If you thought Watain was going towards a slightly mellower, softer sound after releasing 2013’s The Wild Hunt… you were wrong. 2018’s first major black metal release, Trident Wolf Eclipse, is not soft, nor mellow. It’s not even a little quiet. Instead, we see Watain head towards a filthy, mean, aggressive and downright nasty sound that pulls no punches in its sonic heft. Trident Wolf Eclipse is a traditional raw sounding Scandinavian black metal record. It is disorienting and in order to hear all the instruments in the mix, it needs to be played loud…  really loud.  I would liken this aural sound to Taake’s Noregs Vaapen and the early 1349 records where, in order to really sense what’s happening in the music, you are forced to turn your speakers up quite a bit and let the music slightly disorient your ear. The thrashy, distorted and dirty mix inevitably take you away to a different place and time.  Digitally compressed versions of the songs are not going to be nearly as rich in sound as the vinyl and its no surprise that Watain released the first single in a vinyl-only format.

“Nuclear Alchemy” is the first single and video and it gives an accurate taste of what to expect. If anything, this first track is really the calm before the storm and likely the most accessible portion of the record. “Sacred Damnation” features some intense old school tremolo picking and massive heavy riff after riff over a bed of deep and intense bass and drums. This is going be a very familiar sound for early Watain listeners and one has to wonder if the somewhat distant vocals and rhythm guitars in the mix was done to get closer to their signature early 2000’s sound. One of the best tracks on the record is “Furor Diabolicus” which is an uptempo, relentless song the features well placed time changes and extremely pronounced drumming to produce a song that is angry yet also multi-layered and multi-faceted. Some fast, biting leads round out the soundscape.  Immediately following “Furor” is “A Throne Below” which is placed on the record perfectly in terms of position. Again we hear some very original lead work which really places a great deal of distance between this latest release and some of the older Watain records. The band also treats the listener to a rather original guitar tone that really brings the song to life. It has a bit of an epic sound packed into a fast-moving four minutes. “Towards the Sanctuary” gives us a bit of that original, slightly nuanced guitar tone and also blends in a bit of some effects on Erik’s vocals that we haven’t heard Watain use before. These little additions are endemic of the overall record where the band doesn’t necessarily tread all the far from their early work but interjects just enough novel sound and technique to make clear distinctions and progression in their sound. “The Fire of Power” is indeed a classic Watain epic. An incredibly powerful cut that is going to bring the house down live – as if this band needed more material or intensity to do that.

The bottom line is this – If you jumped on the Watain bandwagon after The Wild Hunt, you might find this record a bit too much. Additionally, if you think that Wolves in the Throne Room is “black metal,” you might want to stick to the mellower, shoe-gazey sounds of the modern American scene. There is no space for gazing, politics or safety in Trident Wolf Eclipse. This is filthy, decaying music for a filthy, decaying world.  Tread carefully.

Trident Wolf Eclipse is out this Friday, January 5th, and can be ordered here. 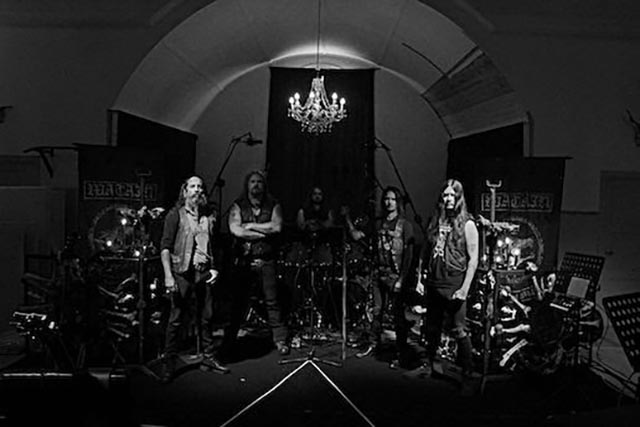