Trigger Warning: I’m writing about Niklas Kvarforth and Shining – the one from Sweden – the one you’re probably afraid of.

I don’t really care too much what people think of Shining and I don’t care too much what people think about me for reviewing Shining. You can read my thoughts on Shining’s live show here. If you want to contemplate what’s really going on in Niklas Kvarforth’s head – have it at. What I’m interested in now is Shining’s new record and having listened to it, it’s pretty simple really. It’s an incredible recording from start to finish. While many people can criticize Shining for so many things, it’s difficult to find serious fault with their newest release, Shining X – Varg Utan Flock.

While it’s difficult to top Shining IX or Redefining Darkness, I have to say, Varg Utan Flock does. The band just integrates so much diversity into this record and has crafted some serious songs with highly evolved musicianship. Even the most ardent enemy of Kvarforth has to see the record’s brilliance.

The record features a cover of “Cry Little Sister” from the Lost Boys Soundtrack. Originally performed by Gerard McMahon, the song is about longing for family when one has been rejected in their youth. No doubt an interesting choice for Kvarforth who certainly lived a troubled youth before entering an even more troubling adulthood. For every time Kvarforth engages in a problematic act, a repulsive video production or a violent, bloody concert, there is clear counterpoint – a heartfelt ballad, a moment of clarity in his mind that he shares with the public and, of course, an unmistakable effort at writing and composing songs, that no matter what he might liken them to, are painfully beautiful and sincere. “Cry Little Sister” isn’t a traditional tremolo-oriented black metal song but rather a melancholy anthem for those left behind, forgotten or misunderstood. In other words; a perfect song for Niklas Kvarforth.

“Mot Aokigahara” is a similar track to “Cry Little Sister” in the sense that it’s a heartfelt yet depressing song. This song, an original written by Shining, is clearly about Niklas’ own life and death and his struggles. The song starts off very slow and very mellow, bridges to interlude where he discusses his life and death and then takes us through the final minutes with an uptempo change into a more traditional metal rocker. The track ends with a brilliant solo and layered lead work.

With “In the Cold Light of Morning” we get an English language song that features Niklas’ clean vocals over a soft musical composition that will remind you more of late 1960’s British rock more than Scandinavian black metal. Of course Shining has dismissed the “black metal” label for some time now and instead has made mention of influences stemming more from 1970’s rock bands like Led Zeppelin, as well as more recent acts like Guns and Roses and Danzig. “In the Cold Light of Morning” could easily appear on a Pink Floyd record before it could something out of Norway.

Those looking for traditional black metal riffing are not going to be disappointed with tracks like “Svart Ostoppbar Eld” and “Han Som Lurar Inom.” Classic sounding Shining but with a more mature twist.

While Shining is the band politically-correct left-wing elites love to loathe, there’s little doubt about the talent Shining possesses. And as so many attempt to discredit the music, the words, and the art of Shining, the band has now released their tenth full-length, demonstrating a tenacity in the face of rampant criticism and (at times) misdirected hostility. Quite honestly, if these metal elites and the social justice thought police have little interest in Shining it’s all for the better – that makes it easier for the rest of us to get closer to the stage and experience the immersive experience that is truly like no other.  The music speaks for itself. 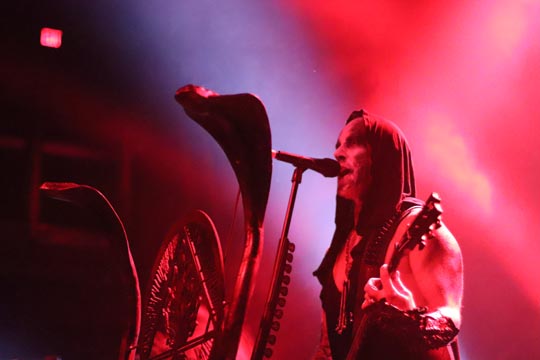