As a longtime Arch Enemy fan I was somewhat disheartened by the band’s previous two studio albums.  Khaos Legions was certainly good, but it didn’t feel as powerful and put-together as their previous releases with Angela Gossow on vocals. In fairness, those records were painfully difficult to top. And, I will admit, I did not care much for War Eternal and thought that Alissa White-Gluz was underutilized – given some tracks to sing over that seemed a bit disjointed at times and somewhat hastily put together. This was all on top my feeling of disappointment when learning that Angela had left the band. In fact, I wasn’t really looking forward to Will to Power, which comes out on September 8 from Century Media. So, with that in mind, let me say that I was rather surprised the first time I heard the band’s new record. This is a clear return to form, but with the addition of some incredibly fun new twists and turns that are going to propel Arch Enemy to new heights.

I received this album while I was working over in Norway. Norway is a great country for metal and a wonderful place to momentarily escape the current abject madness of my home country, the United States. It was fitting that I had the opportunity to listen to some new metal in a country that truly embraces the genre. Overlooking a breathtaking fjord from my apartment in Bergen I gave Will to Power a listen. Like a small fishing raft caught in the northern winds, I was immediately blown away. The musicianship, the energy, the orchestration and the riffs are just outstanding.

Will to Power is killer hook after hook (I should probably put another northern sea or fishing analogy here but I’ll spare you)  and whereas I didn’t think White meshed all that well with the band in War Eternal, the new record really shows a rather seamless integration. It’s clear that Amott took the song writing in another direction and really utilized his vocalist’s massive skills.  The songs feel much more organically crafted, properly utilizing the wealth of talent at their disposal.

I will admit that while the lyrics are, at times, overly simplistic and rather cliché here and there, this doesn’t really deviate too much from the standard Arch Enemy lyrical formula. In fairness, at 40+ years old, I might not exactly be in the target market anymore (ironically I’m writing this review sitting on a place with the band Exciter on our way to Iceland – now there’s a band from “my day!”). Further, it is indeed nice to hear lyrics that embrace individuality and liberty, such as those on tracks like “The Eagle Flies Alone” and “A Fight I Must Win.”  Lyrics like these are especially refreshing for this current, rather perverse epoch in metal that seems to be stuck in tribalism and misdirected collectivism.

Musically, there are some really pleasant surprises on this record that really demonstrates the care in the craft of Will to Power. What immediately will jump out at you is that there are some clean vocals here from Alissa White-Gluz and let me say, her clean vocals are beautifully mesmerizing on “Reason to Believe.” The song features some changeovers from clean to dirty and then moves into some layering of both in the bridge and the chorus. Extremely well executed. Secondly… the leads…. Let’s talk about them. It’s so clear the addition of Jeff Loomis to the fold has not only allowed the integration of some lead sounds and textures we really haven’t heard much from in Arch Enemy’s catalog – but the addition of Loomis seems to have had an effect on Amott, who provides some of his fiercest lead work in years. The icing on the Swedish cake here… there’s even a little slap bass from Sharlee D’Angelo on the final track.

Having just seen Denner/Sherman of Merycful Fate fame perform in Scandinavia last week, I was really digging the Andy LaRoque influence in some of the leads here by Loomis. You can clearly hear this on “Dreams of Retribution” and “The World is Yours.” This is the type of work that Loomis brings to the band. He’s a master of lead guitar and pulls from so many different classic metal influences – turning these influences and techniques into his own unique creations. In this respect, Loomis opens new doors for Arch Enemy. Songs like “My Shadow and I” are going to treat the listener to variations of leads and rhythms that simply hadn’t existed on their past records. White’s contribution is similar in the sense that the band can layer vocals steeped in the traditional, signature, dirty sound with essences of the clean on top.

What does this all mean for Arch Enemy? For starters it means that they’re not just going to “big in Japan.” They’re going to be huge everywhere with this latest record. Arch Enemy purists (are there any of those left?) need to be ok with this. The band is still very heavy and the riffs are, per usual, incredible. At the same time, there is a brighter sound here and aspects that reach more closely into the pop world. Is that a bad thing?  Honestly, it is not. As many of readers and haters know, I wear my edgelordom (yeah, I just made that word up)  proudly on my Norwegian-weathered denim sleeve and I make no apologies for it, so I’m not exactly one to embrace pop or Machine Head. But what Arch Enemy has done here is created a record that is heavy and accessible. And they’ve become a band that is really meant to play in the large arenas and the top venues.

All in all, Will to Power is at times sonically deep and then blissfully light. When you put it all together, it’s an absolute winner. If you want to see this band on tour in the US this fall, I might suggest that you buy your tickets now because once this record drops, shows are going to undoubtedly sell out rather quickly. Secondly, catch them in the clubs now up close and personal before they start moving to the 3,000 seat venues.  It is going to happen. 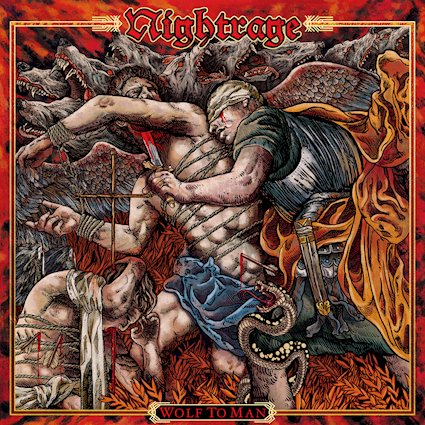