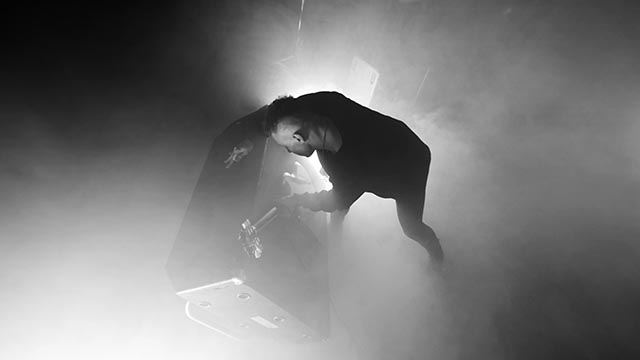 Greg Puciato has quickly become a household name even outside the world of the Dillinger Escape Plan as he’s really come into his own as a solo artist and key member of Killer Be Killed. While normally I’d be covering Greg’s show live in his hometown of Baltimore, Maryland after a record release, we’re all stuck at home waiting for these vaccine vials to ship across the world. Like many artists, Greg decided to do a streaming show, but unlike many artists he did it his way – and could we expect anything less from, perhaps, one of the modern masters of the unexpected? And if you’re in your 40’s like I am, you surely remember those VHS “at home” videos that artists would often make in the late 80’s and 90’s that often blended live performance with a compendium of other material. I still have some of those VHS cassettes in my bedroom – the amazing Danzig I and II home videos, Type O Negative, King’s X, Shelter and so many others.
The VHS home video, is perhaps, a nostalgic comfort for us Gen X’ers and while I wouldn’t exactly call Puciato’s “comforting” there was a familiarity to it that certainly resonated with me. Perhaps it was the “tracking” visuals that were reticent of an old VHS copy of a copy of a copy, or the rather quick switches from live performance to “behind the scenes” without any narration or warning. Whatever behind it, Puciato knows his target audience and he managed to put together a really interesting performance that was post-modern and heartfelt at the same time. Perhaps, this is the key formula behind Puciato’s appeal… or maybe it’s the fact that he’s just a stellar musician and frontman. You never know what Greg is going to do next, and that keeps us all riveted.
Setlist:

Absence As a Presence (studio)
Fire For Water
Deep Set
Do You Need Me to Remind You?/Absence snippet
Don’t Wanna Deal (studio)
Down When I’m Not
Roach Hiss
Crazy All Around (studio)
Fireflies
Evacuation
September City
Lying at the Bottom of the Sky (studio)
Musicians:
Chris Hornbrook(drums)
Nick Rowe(guitar and keys)
Jeff Geisser(bass)
Steve Evetts(producer in studio)