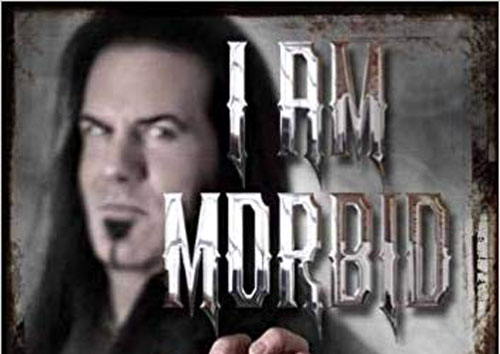 David Vincent, former frontman/bass player for the legendary Morbid Angel, and current lead vocalist for extreme metal supergroup VLTIMAS, is releasing his autobiography, I Am Morbid: Ten Lessons Learned From Extreme Metal, Outlaw Country, and the Power of Self-Determination on Jawbone Books this February. Being the huge fans of Evil D as we are here at Metal Insider, we’ve read it. If you’re looking for boring, you’re going to be pretty disappointed.  I read this book in the course of two days and really loved his straightforward style.

The book takes us through, really, all of David’s career, with an obvious emphasis on Morbid Angel. However, he doesn’t shy away from his time with the Genitorturers, as an outlaw country artist, and as a young man finding his way in the Southern United States.

Some personal revelations that David reveals:

In Chapter 5, Rebirth, Vincent talks about his time away from Morbid Angel. In one particular passage he goes on about how 9/11 impacted him. David reveals some, well, interesting thoughts on who knew what about the attack:

“I know that there were many people who were warned not to show up to work on the day that the planes hit the World Trade Center.  I also knew there was communication between people, alerting them that something was going to happen.”

Now, exactly who these people were or how David knows this information, he doesn’t say. It is clear that Vincent found himself in a bizarre and somewhat foreign existence, as most of us did, in the early 2000’s.

Wanna know what Vincent thought about Obama and Obamacare?  He’s going to tell you.  Here’s a taste:

“When Barack Obama become president in 2009, he had the opportunity to be the great mender, in a lot of senses, but I thought his healthcare plans were terrible.  Historically speaking, what evidence is there to make me believe that government is doing a good job – after doing such a terrible job at everything else…”

While he doesn’t get overly political in the text, he certainly comes off as someone who has a rather strong disdain for politics and, to a greater extent religion. David doesn’t dwell on either and one can easily understand why given today’s cancel culture environment.

No doubt, Morbid Angel’s most infamous record. And, as much as I love this band, it’s really hard to love Illud. David claims that guitarist and primary songwriter Trey Azagthoth was heavily into dubstep and techno at the time of the writing of the record and had a vision of songs that sounded like mixtapes and mashups. I found that assessment believable given the finished product. In some passages it seems like David wants to absolve himself from most of the writing process of the record, however, he also explains how he’s actually proud of the finished product and believes that Illud gained the band new fans. I wouldn’t say, however, that I came away believing that Vincent wants to put another record like this one. Let’s hope he doesn’t.

Vincent does give us some insight into infamous tracks like “Too Extreme!” and does take credit for “Radikult.” It would be interesting to hear more of Trey’s side of the story but I don’t think Vincent was out to make Trey look bad or make himself look better. My personal take after studying this debacle from multiple sides was that both really played a key role in this record. I would, however, completely agree with David’s take that there should have been more songs like “Nevermore” on that record and less like “Too Extreme!”

The Second Breakup after Illud

“Trey and I spoke on the phone on June 18, 2015.”  He said, ‘Listen man, we can’t work together any more.’  I asked him what he meant and he said, ‘That last record, whatever it was supposed to be, it would have been better if either you hadn’t been there or I hadn’t been there.'”

Vincent’s take on the breakup seems believable and genuine. He doesn’t throw Trey under the bus and doesn’t bad mouth him. In this respect, this text isn’t meant to be a salacious tell-all, but rather an insightful and reflective piece on David’s career and his lessons learned. He also speaks about drummer Pete Sandoval’s departure and the entrance of Tim Yeung –  again – with respect instead of heading down the path of tabloid fodder. Yeung, btw, is an amazing drummer, I can see why Vincent thinks so highly of him.

Honestly, the book is breezy and easy to read. It rounds out at over 250 pages and David gives lots of details and analysis about his songwriting. For example, you get to find out how and where he came up with the famed “Bow to me…” lines from God of Emptiness, and what his state of mind and inspiration was for many of the songs we all know have come to love over the years.  There’s also a great deal of insight into some of his mannerisms and peculiarities that, I think, will give some fans some satisfaction and understanding about David Vincent, the individual.

You can pre-order I am Morbid here.  Honestly, you should. If you’re a Morbid Angel fan, this is a must-read. 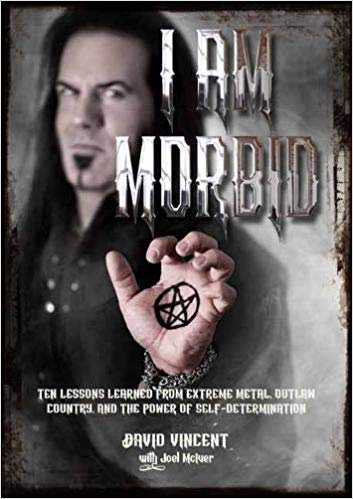