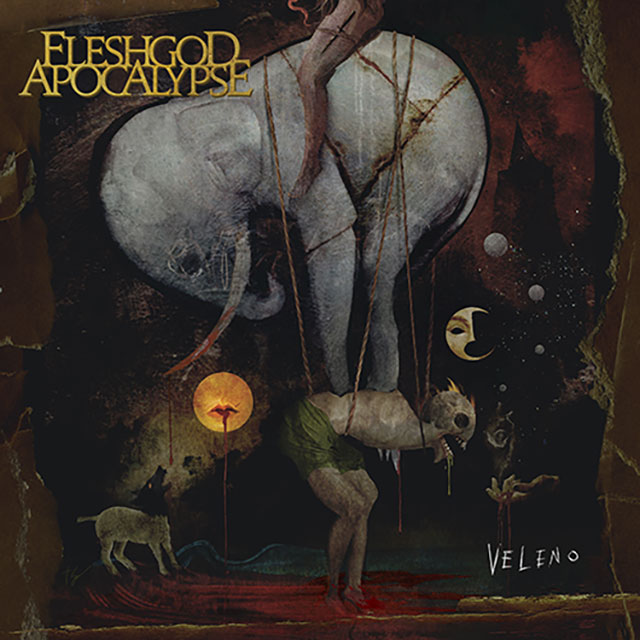 Fleshgod Apocalypse have gone through significant changes since 2016’s King as both Tommaso Riccardi (vocals), and Cristiano Trionfera (guitar) left the group back in 2017. Mixups such as these inevitably result in fans questioning the band’s next chapter. However, these Italian symphonic death metal giants were brilliant on introducing their new direction by embarking on a North American tour  before the release of their new album Veleno, which is out now via Nuclear Blast. Initially, the band intended on premiering their latest effort live at this year’s 70000tons of Metal, but due to production setbacks, they ended up debuting one song.

Now that the record is out, it officially welcomes Francesco Paoli’s return behind the microphone since 2009’s Oracles. The album opens with what we heard at this year’s 70000tons of Metal with “Fury.” The track will remind you of a more matured 2011’s Agony, which is surprising on why they decided not to release this song as a single.  Initially, it may seem strange to hear as the album’s opener, but as the heavy melodies continue to grab the listener from the very beginning, it makes sense. “Carnivorous Lamb,” opens where “Fury” ends, which isn’t the first time Fleshgod Apocalypse have done something like this (“The Betrayal”/”The Forsaking” – 2011’s Agony). This continuation doesn’t mean there’s no differentiation between both tracks; it demonstrates how they pair well together as it continues to breakdown to another malicious tune.

“Sugar,” was released a few months before the album arrived, which was perhaps the best choice for the group to have as an official first single. The track surpasses having blistering melodies; it also holds a poignant meaning behind the lyrics. This song alone shows the amount of emotion, storytelling they were trying to display on this LP, which is why you need to listen to it at least ten times before understanding its direction.

Following three abrasive songs, “The Praying Mantis’ Strategy” introduces the next chapter. The record moves in a darker and yet slower direction with “Monnalisa.” This song is unique and different than anything from Fleshgod Apocalypse, however still the same. There’s a lot of various experimentations in this one track including a unique hard rock-esque guitar riff and combining it with operatic vocals. The pace picks up with “Worship and Forget,” but this time at a faster and more aggressive beat than what we heard towards the beginning. There’s a lot of orchestrations mixed here as well, similar to what they did with 2016’s King. However, towards the end of the song, you feel like you’ve entered an Italian Opera from hell.

Typically,  the last quarter of an album is usually the make or breaking point as the record will either fall flat or pick back up. And with Veleno, “Absinthe” is one of the boldest songs from the LP. However, towards the beginning of the song you forget you are listening to Fleshgod Apocalypse as there’s quite a few operatics that would make one wonder if you’re listening to a b-side track of 2014’s The Quantum Enigma from Epica. This similarity doesn’t last long as Fleshgod elements instantly erupt, but it also continues to explore with experimentations. “Pissing on the Score,”  takes you where King left off but it also features a unique guitar melody that at some point you think it could belong to a classic ballad track from the 80s.

The pacing cools down with “The Day We’ll Be Gone” as it explores a darker emotional tune mixed with classical melodies. “Embrace the Oblivion” is one of the best songs of the album. It moves slower than other songs but has one of the most substantial melodies while executing it with unique ensembles. Overall, the track is exactly what the album is: heavy, poetic, classical, and expressive. Surprisingly the title track, “Veleno,” is heavily inspired by classical music as it is more or less a classical masterpiece. The Rammstein cover “Reise, Reise,” feels more of a playful cover as it’s more of an imitation than making it a standalone cover. Finally, the album ends with the second bonus track, the Nocturnal Version of “The Forsaking.”

Fleshgod Apocalypse’s Veleno holds a little bit of everything that they’ve been trying to accomplish since day one. It may not be their overall best album to a fan’s perspective, but it is their overall strongest and mature record throughout their entire career. If we had to give Veleno a rating, it would be a 9/10.