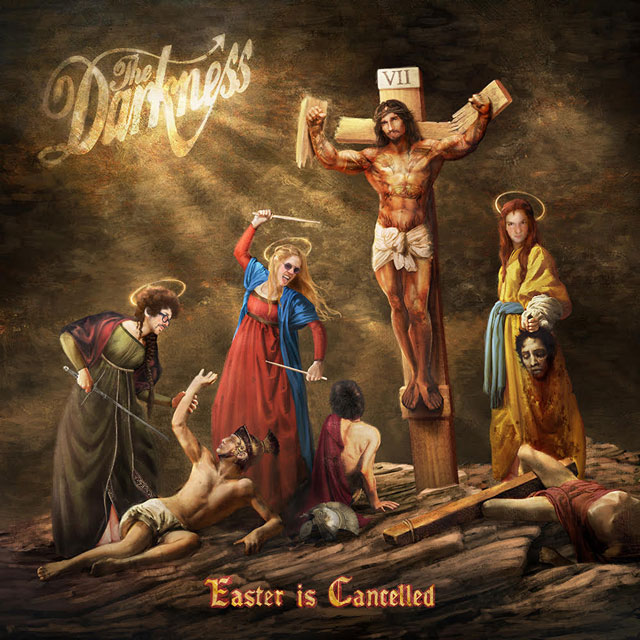 If rock’s purpose in the world was ever in question, leave it to British rockers The Darkness to explore the subject in depth. That’s exactly what the band does on their new album Easter Is Cancelled, a cinematic loose concept album that pulls from classic metal musical tropes to discover the power of rock.

There’s no better intro to the album’s concept than opening track “Rock and Roll Deserves To Die.” Acting as the album’s overture, the five-minute epic runs the gambit of rock’s lengthy melodic history. The jangly, crystalline acoustic guitars in the beginning have a bard-like quality, complimenting the critical lyrics to make the song feel like a tribunal is hearing a case on rock music’s purpose. Interspersed within that are bursts of AC/DC-like power riffs, answering back the tribunal with attitude ending in a whirlwind of metal guitar giving rock the final word before being put under the microscope.

What we come across as the album progresses is that there is an overwhelmingly sentimental place for rock. Power ballad “How Can I Lose Your Love” follows the album’s grand opening with a what could, in the storyline of things, be a solemn whimper, a moment of hesitation and panic for the love (of another person or music) that could be lost. “Live ‘til I Die” has a Bruce Springsteen-like storytelling quality run through a classic rock lens. What starts out as a teenage drama turns into a love letter from rock music comforting the song’s protagonist. “Heart Explodes” seems a bit frenzied, telling the story of a songwriter struggling between the call of fame and trying to write a rock song that matters.

“Deck Chair,” which actually seems like it was written as a ballad about a deck chair, is a bit perplexing. Coming right in the middle of the album, it’s bluesy acoustic guitar melody almost seems a little like comic relief between heavy tracks / acts, “Heart Explodes” and “Easter Is Cancelled.”

The album’s second half picks back up at “Easter Is Cancelled,” the continuation of “Rock and Roll Deserves To Die’s” guitar-led tribunal trial. The song’s scathing lyrics chide (presumably) those making rock music, blasting them for perpetuating evil and not doing more to spread positivity.

Such is the tumultuous path the next few songs take in an effort to reach a conclusion. “Heavy Metal Lover” is conflicted, hopping from a ballad-ized Warrant-like, “Cherry Pie” melody and vocal phrasing to upbeat love ballad to black metal riffing with a KoRn-like vocal effect to cap it off, all within four-and-a-half minutes. Its subject is conflicted too, torn between metal’s “satanic,” dark nature and genuine love for the genre. “In Another Life” is the perfect power ballad love song singer Justin Hawkins is seeking throughout the first half of the album. However, the lyrics are bittersweet, as he wistfully concedes that if circumstances were different, this love (either for a person or for metal) could work out. The album picks up speed once again with “Choke On It,” a heavy, rolling rock song that gives a big middle finger to those who doubt the necessity of rock.

Just like “Rock and Roll Deserves To Die” is the perfect way to start, so is “We Are The Guitar Men” the perfect way to end their inquiry. A triumphant ode to the power of rock and playing music, it concludes that though its intentions can be muddy at times, music, and rock in particular, is a necessity and an extension of one’s self.

What’s impressive about Easter Is Cancelled as a whole is that as it debates rock’s purpose and intentions, it’s also encompassing a wealth of music styles and history, and combining it in such a way that it all works together harmoniously on one album. You have the heaviest of metal (“Heavy Metal Lover”), engulfing power pop (“How Can I Lose Your Love,” “In Another Life”), traditional ballad (“Deck Chair”), downhome rock (“Live ‘til I Die”), sometimes all within one song (“Rock and Roll Must Die,” “Easter Is Cancelled”) and nothing seems out of place. There isn’t one song on this album that isn’t unique and memorable on its own as well.

The Darkness has always been good at taking the hard rock genre and amplifying its idiosyncrasies and Easter Is Cancelled does just that on multiple levels. Through the album’s loose story, the band examines rock and its intentions thoroughly and from many angles to justify it as a necessity. Though the album bounces around subgenres a lot, it’s the over-the-top passion and theatrics of it all that keeps you invested. From first listen, you’re hoisted into sing-along power pop melodies and foot-stomping rock riffs that easily suck you in. You can feel these songs in your soul and they feel good.

As “We Are The Guitar Men” concludes, “Long live rock and roll.”

The Darkness’ new album Easter is Cancelled is available now. 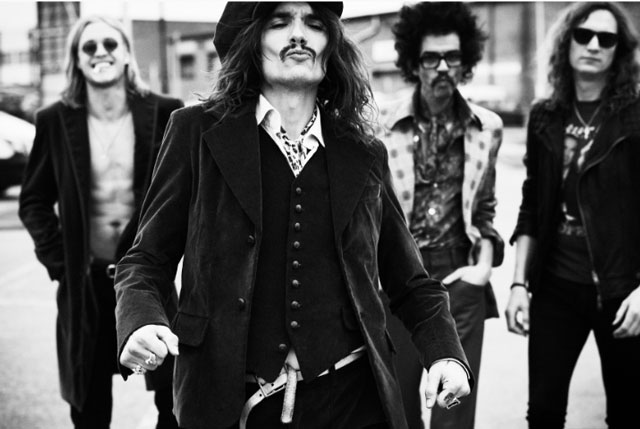 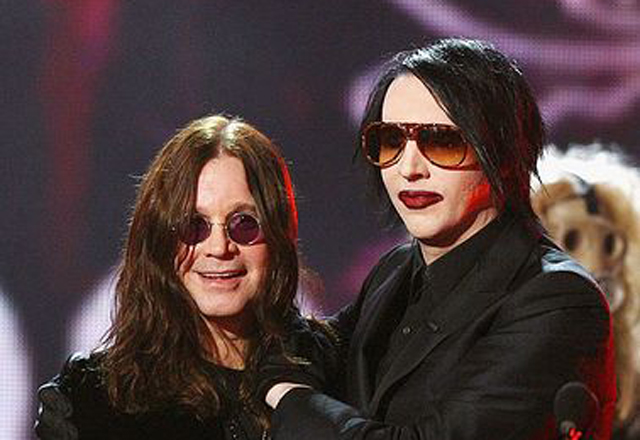