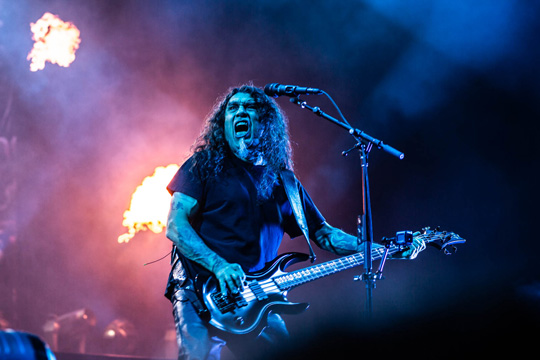 Slayer said farewell to NYC at the Madison Square Garden on November 9th, 2019. For this bittersweet show, we had photographer Khadija Bhuiyan capture these thrash legends. Additionally, Spotlights/Primitive Weapons drummer Chris Enriquez asked members from Anthrax, Agnostic Front, The Misfits, and more to share their thoughts on Slayer’s impact on the New York music scene.

Slayer have a rich history with NY, particularly with many sub-genres in the Empire State, ranging from heavy metal, hardcore, punk, and even hip hop. Their relationship with NY started on Long Island in 1984 when they performed at The Rio Theatre in Valley Stream with Overkill. On the same tour, they also performed at Brooklyn’s now-defunct, legendary venue – L’Amour. They eventually became regulars, playing alongside Bad Brains (who had moved to NY at that point), NY crossover pioneers SOD, and many more. Legendary and iconic producer Rick Rubin would discover them in NY, sign them to his label (Def Jam Recordings) and produce/release 1986’s Reign in Blood as the label’s first release. Guitarist Kerry King also lent his shredding capabilities to solo on “No Sleep till Brooklyn,” a classic song by NY hip hop pioneers, Beastie Boys, which was on their debut album, Licensed to Ill. During this time, these thrash giants performed at what would be considered by many old-school New Yorkers, their most legendary area performance. This memorable show was at The Ritz (now Webster Hall) with NYHC Godfathers’ Agnostic Front and had a significant impact on the hardcore/crossover scene. Fast forward to thirty-four years into their recent farewell tour; the Big Four Thrash Legends decimated Madison Square Garden on 11/9/19. I spoke with some major players within the NY music scene ranging from old-schoolers to present-day contemporaries to share their stories on how the band impacted them.

“I started my cooking career as a prep cook in 1986 in a small town in Rhode Island. Working in the prep basement frantically peeling 50-pound bags of potatoes and carrots to the soundtrack of ‘Reign in Blood;’ (and before that washing dishes for two years to ‘Show No Mercy’ and ‘Hell Awaits’). If you told my 15-year-old-self that some 30 plus years later I would have seen the band over 30 times and become good friends with the band, especially Kerry King who is one of my close pals now and that I would not only cook for them countless times but share Thanksgiving meals together, man… I would have just died! But it’s all true and what a ride it has been. I’ll be seeing Slayer at their farewell show later this month and it will truly be a bittersweet moment as they have been the soundtrack to my entire career!”

“When I think back to the early 80’s I was just an aspiring musician trying to find a band, find the sound, find my ticket to being successful in the right band. On the West coast, I guess those guys (Metallica, Megadeth, Slayer) were all thinking the same thing. I remember making our first record, which would become very popular in the underground in the early ’80s (‘Fistful of Metal’). Then, of course, Slayer had ‘Show No Mercy,’ which also become popular in the underground. Same with Metallica’s ‘Kill ‘Em All’ in the underground. We all started a movement without even knowing we were doing it. We were on the East Coast, and those guys were all the way on the West Coast. Over the years, the thrash metal thing became a huge global thing. You couldn’t look at an article about any of our bands and not see the other three mentioned (Slayer, Metallica, Megadeth), and so yeah, the movement started. And the bands didn’t sound the same. We were all very individual. These days, everyone sounds like the other band. The four bands just didn’t sound the same. I remember loving ‘Hell Awaits’ when I first heard it. I thought they def took it up a notch. The next album ‘Reign in Blood,’ they took it up another notch, maybe two. I think Rick Rubin made the sound, and everything just got more realized. It was just brutal. I remember when I heard an advance of it at Def Jam. I was just like, “wow, this is fucking awesome,” and that was it, man. Being part of that group, “The Big Four,” we were really good friends from back then. We did the “Clash of the Titans” tour together. We hung out a lot. Later we started touring more together and feeling that whole family vibe and camaraderie. And even recently too. I think they’re going to be missed. All these bands are breaking up and continuing to do reunions. I don’t think Slayer will do that. I mean, it would be nice if they came out of retirement to do a festival here and there. I think they made their mark, though. They painted with different paintbrushes than the rest of us did. I think they used more red. I think they did a lot for the movement, which of course, is heavy metal.”

“The guys in Slayer are family to me because we’ve done so much touring together over the years and have had so many great shows, laughs and times together. I went to see them last week at Madison Square Garden at their last NYC show- It kind of hit me hard that it was the last time I’d see them play together on stage, but I have a lot of great memories from the tours. Slayer will live forever….SLAAAAYER!!!”

“Slayer to me has always been the soundtrack of hell. When you do go to hell, Slayer is exactly what it will sound like. Exactly! Insane riffing, strumming and drumming, INSANE!!! Every time I listen to them, I’m like, how the fuck are they even playing that !?! To me, Slayer is the most punk rock heavy metal band of all time. To me, it’s sooo punk rock more than it is metal. It’s punk rock with solos! A lot of people use the word “SLAYER” in place of the word awesome or great. NOW THAT’S saying something. I’ll wrap Slayer up in one word: “BRUTAL.” Does that answer your question, CHRIS…?”

“There is no doubt when you hear a Slayer song that it is Slayer. There’s no guessing. There’s no question. That is something that is truly rare in heavy music. “