Over the past ten years, I’ve covered too many shows to count, and at least 4-5 festivals a year. Once in a while someone always asks if I’ve been on Shiprocked. This past January the Carnival Liberty set sail to the beautiful Bahamas with myself and 3,000 other rock/metal fanatics. Making the trip extra special, ShipRocked promoters tossed in bands including Stone Sour, Seether, Black Label Society and In This Moment  to name a few.

After booking, not knowing what to expect, I joined a Facebook group appropriately called “Shiprockers”. In there, new and old fans, usually referred to as “Newbs” and “Survivors” get together to plan what feels more like a family reunion, than a gathering of strangers. It was in here that I learned about tips and tricks of how to survive 4 days on the open sea, what to expect, and most importantly… to bring custom wristbands from my hometown, to exchange with all my newly found friends.

In Port Canaveral, Florida, there were already people meeting old and new friends, trading bracelets and making plans, before even getting on the ship. Upon boarding the Liberty, you are handed either a “Newb” or a “Survivor” badge, depending on it being your first time or not. You’re then ushered into the buffet to wait for your room to be ready. So far, this was exactly like a normal cruise.

After a short emergency safety drill on deck, we were told to meet on the top deck for the family photo, which would be immediately followed by Seether playing us out to sea. Seeing that the ship returned to port the morning of us loading, things were set back by about an hour. Seether went on and started what became a 1o concert day including performances by Shaman’s Harvest, Nothing More, Red Sun Rising, Black Label Society, and In This Moment.

With over 5 different venues aboard the ship, there was always something going on. The two biggest stages, the theater, on the ships interior, and the deck stage, which was built over the upper deck pool, ran opposite of each other the entire week, making sure there was always a band playing.

This is what I would call a regular cruise day. We pulled into port in Nassau, Bahamas, and docked and were given free time to see the city and shop. Back on board at 5:30pm, Black Label Society played us out of port at 6pm, as we set sail for Carnival’s private island Half Moon Cay. ShipRocked organizers had given us fair warning that “theme nights” were in play aboard the ship, and tonight’s was 2184: A Prom Odyssey! In honor of that idea, The Stowaways, which is more or less a supergroup of artists from a bunch of other bands, did an entire set of cover songs from the 80’s.

Stone Sour closed the theater out on this night, with front man Corey Taylor proclaiming that we were all family now, and he was having an amazing time. Dressed in a brightly colored Hawaiian shirt he worked the whole stage interacting heavily with the crowd. Being a space themed cruise, it was an obvious choice to have Starset aboard playing us late into the night on the deck.

To switch things up, we completely took over Half Moon Cay, band gear was unloaded and setup in what was created to look like a crashed pirate ship on the beach. A bar area was setup for a four band meet and greet where fans could walk through shake hands and get their picture taken all with the beautiful beach behind them.

For those who still wanted to rock and party, Otherwise and P.O.D. both played sets aboard the pirate ship which turned the beachfront into a massive party. At days end, new supergroup Stereo Satellite fronted by Lukas Rossi took to the deck stage and took us out to sea. Followed by In This Moment, Like A Storm, Seether, and closing out with Columbus natives Beartooth, there wasn’t a moment where music wasn’t being heard somewhere.

This was by far the busiest day for not only bands, but also for fans. Our only full day at sea, ShipRocked organizers had it all planned out. Over a dozen performances, interactive tournaments like Beer Pong, and Mini Golf, Podcast recordings, monster Meet & Greets, and the live charity Auction were all on the docket.

With something going on at any given moment, there were lines all over the ship of fans waiting to be part of something amazing. The largest meet and greets were held in a dining room, and fans went through a circle of groups, getting the chance to once again speak with and take a photo with their favorite artist. Round one saw P.O.D., Black Label Society (Zakk, personally greeted everyone individually shaking a hand or giving a hug), Seether (where bassist Dale Stewart was having a fun time scaring people by jumping out of a curtain at them), and In This Moment. Immediately following that was round two, which had Nothing More, Starset, The Stowaways (almost all 20 of them together) and Stone Sour. During this round, one fan got down on one knee in front of Corey Taylor and proposed to his girlfriend, who immediately broke out in joyful tears.

The Stowaways performed a tribute show to lost artists tonight, that didn’t leave a dry eye in the house. Covering songs from Metallica, The Allmann Brothers, Soundgarden, and ending with Linkin Park, Lukas Rossi did an amazing cover of “Crawling” accompanied by only a piano, that had the entire crowd singing. The rest of the Stowaways joined him onstage immediately following it up with “In The End” to close out their tribute.

With a small break for fans to gather their composure, Stone Sour took to the deck stage to close out ShipRocked 2018. Corey ran onstage dressed in an all-white captain’s uniform proclaiming he was the new captain, and that they (Stone Sour) came to tear the ship apart. Playing well into the midnight hour, fans left it all on the pool deck, only to want more.

For this being my first of what will be many ShipRocked experiences, I have to give a massive amount of credit to the guys that run the Cancer Sucks Charity. I was lucky enough to have time to sit in on their live auction, where 11 items were auctioned off in under an hour raising over $80,000 dollars. Not to mention the ton of silent auction memorabilia that was bid on for the entire week. Everything from stage- worn Papa Roach clothes, to an autographed Led Zeppelin guitar (which was bid on for $5000 and immediately re-donated for next year’s auction.)

For anyone who might be on the fence about spending what most people would believe is an obscene amount of money for 4 or 5 days on the high seas. I have to say, it is worth every penny, as long as you like the bands on the bill. There really is nothing like total chaos, mixed with wild antics, live karaoke, and A LOT of booze, to make this more like a yearly family reunion than a concert. For more information, or to get your pre-booking deposit in for next year’s cruise out of Galveston, Texas, visit the official website www.shiprocked.com today. And maybe next year… you’ll be part of the family! 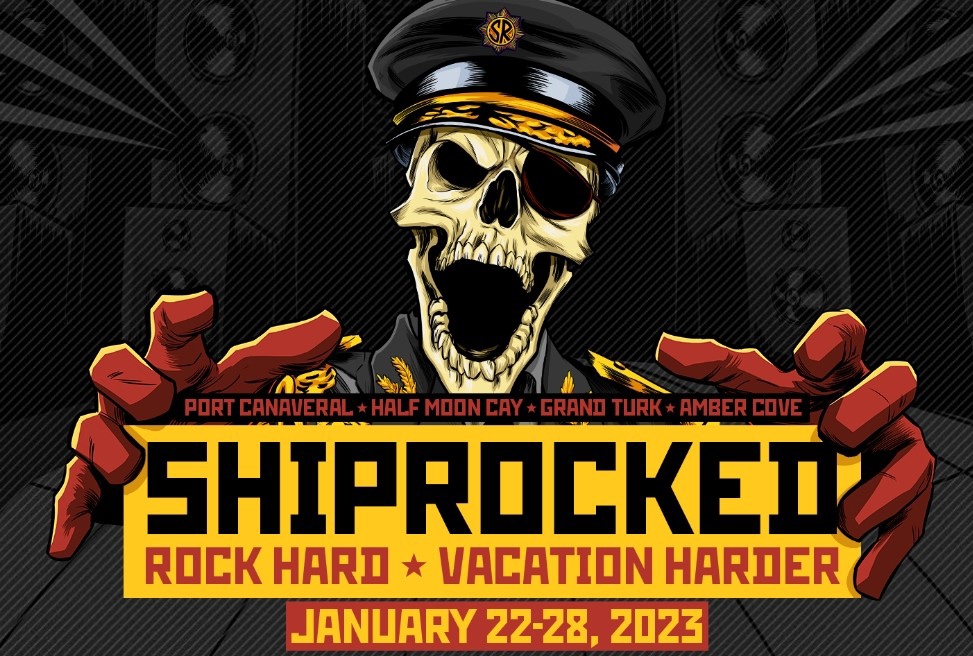