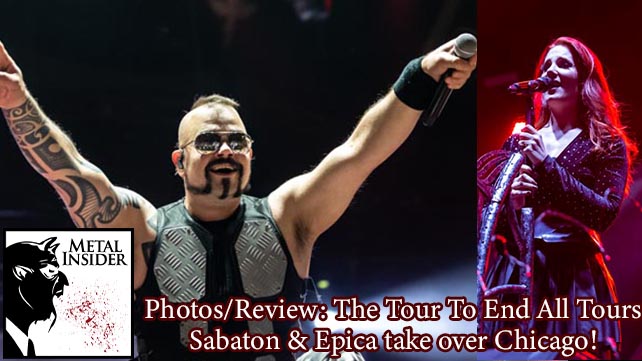 Sabaton and Epica are two long-time stalwarts of European metal, but it’s always huge news when either of them announces a comprehensive US tour. Sabaton toured the US in late 2021 and has continued to book larger venues since their first US appearance in 2010. However, it’s been nearly five years since Epica toured these shores. Since they released Omega in 2021 (and are also preparing to release an EP, The Alchemy Project, in early November), it’s only fitting they made their triumphant return across the pond.

Making my way to the Aragon Ballroom in Chicago’s Lincoln Park, the line was wrapped around the side of the building upon my arrival shortly before opening. After the typical pre-show tasks – collecting photo credentials, ensuring the cameras were ready to go, and so forth- I made my way to the photo pit just before the lights dimmed, and Epica began. It’s expected for Epica to have an opening track seamlessly merging with the first song, managing to whip the crowd up into a fervor, and there was no exception here! The crowd went absolutely wild as Simone Simons took to the stage with the opening lines to “Abyss of Time,” the first track off of their latest full-length, Omega. The stage was relatively high off the crowd (much to the benefit of those in the back of the packed venue). Still, the combination of that fact and the simulated barbed wire gave somewhat of a humorous “Epica in Prison” effect throughout their set. Epica made their way through their well-balanced setlist celebrating twenty years of these Dutch symphonic metal giants’ storied career. Belting out everything from “Consign to Oblivion” off of their first album to tracks from their latest offering, the concertgoers were very much in their hands. Personally, I’m happy that “Storm the Sorrow” is back in rotation, as well as “Unchain Utopia” making an appearance. 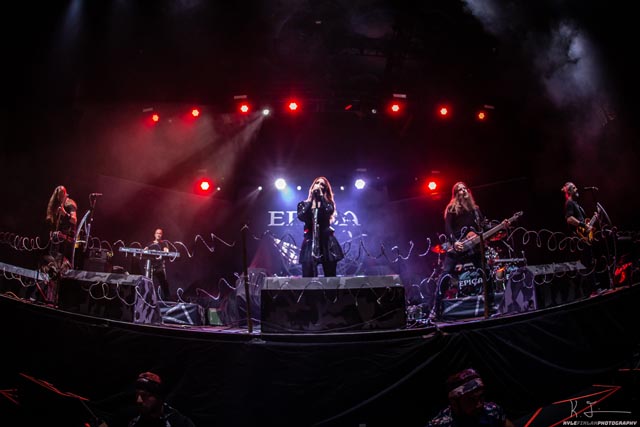 SetList:
Abyss of Time – Countdown to Singularity
Sensorium
Victims of Contingency
Unchain Utopia
Cry for the Moon
Storm the Sorrow
Code of Life
Beyond the Matrix
Consign to Oblivion

After a 10-song set from Epica and a changeover of approximately 30 minutes, the Swedish Pagans in Sabaton took the stage. An opening monologue video covered how the US military entering World War I helped turn the tide of the conflict and prefaced the band’s entrance. Chants of “USA, USA, USA” rang from the crowd, erupting into cheers as vocalist Joakim Broden and company took the stage, ripping straight into “Ghost Division .”Shortly after this, waves of crowd surfers started pouring over the front row, keeping the security busy for the entire track duration. It’s been impressive to see Sabaton’s crowd grow. With budgets and stage real estate for a continually evolving production in lockstep. On this tour, they had a massive video wall, the aforementioned barbed wire at the edge of the stage, rifle mic stands, and the tank drum riser! Having been around for some time, Sabaton have a substantial back catalog (and audience expectations surrounding songs like “Swedish Pagans,” for example) to balance with the promotion of the latest album, The War To End All Wars. This was tidily achieved, covering the basics with songs like “Primo Victoria” and “Gott Mit Uns,” throwing in my personal favorite “Night Witches,” and even managing to squeeze in a cover of “Highway to Hell” from AC/DC.

This was an incredible night for two of the flashiest metal bands from Europe to grace their presence in North America. Every effort should be made to attend the next time they come around! The remarkable tour to end all tours wrapped up on October 23rd in New York City. An unforgettable trek, one where we’d love to see the two phenomenal acts unite for hopefully a second round of dates. 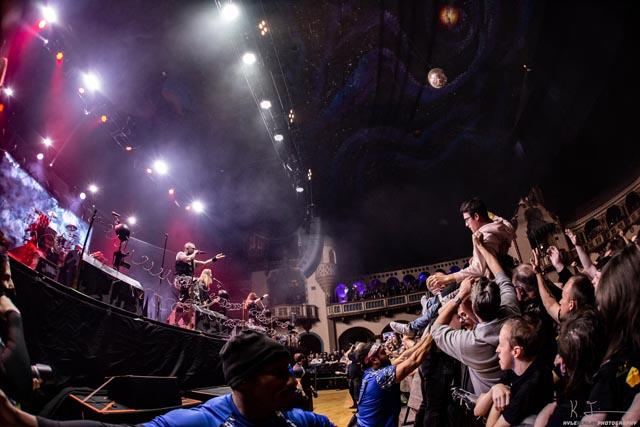 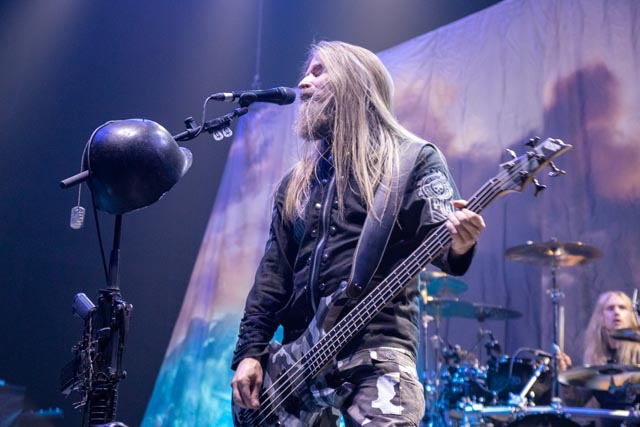