The self-declared Metal Tour of the Year rolled into New Jersey’s PNC Arts Center on Thursday night (Sept 16), and holy f*cking hell, did it live up to its billing. With a beastly lineup built on Hatebreed’s hardcore, Trivium’s thrash fusion, Lamb of God’s monstrous power grooves, and Megadeth’s timeless metal classics, there was something for every flavor of metal fan in attendance.

The moniker of Metal Tour of the Year had little competition in this Covid-battered state of the planet; KoRn is the only other amphitheater-level metal act on the road right now, with Slipknot soon to follow. But that takes nothing away from the face-melting mayhem this lineup delivered. If anything, Mustaine and his tourmates deserve mega-kudos for maintaining (thus far) a postponement-free tour while delivering a pre-pandemic level show for the masses.

And deliver he surely did. Watching Mustaine shred through favorites like “Hangar 18” and “Sweating Bullets,” you’d have no idea that the man was battling throat cancer this time two years ago, and frankly, none of us cared. We were too busy headbanging and air-guitaring to the riffs and solos that Dave and friends were blasting at eardrum-wrecking volume. Speaking of Dave’s friends, it was a delightful reunion for those that remembered James LoMenzo from his previous stint as Megadeth’s four-stringer and a kickass introduction to guitarist Kiko and drummer Dirk for anyone who hadn’t caught a Megadeth show in the past five years.

The band also rolled out some entertainment during the instrumental song “Conquer or Die!” from the Dystopia record. Vic Rattlehead stalked the band and crowd, with a larger, meaner robotic Vic Rattlehead shadowing him. With a hint of GWAR-esque vibes, it was a fun sight for the seated fans during the criminally underrated track. As for those up on the lawn? I couldn’t tell you personally, but if I know my Megadeth fans, there was surely a pit of shirtless longhaired thrashers stomping around the muddied grass.

Age and success may have mellowed Dave out compared to the old days. However, metal’s favorite malcontent still offered some choice of words about the government and state of the world before closing the night with a cranked-to-11 “Holy Wars.” To be honest, would it even be a Megadeth show if Dave didn’t offer a middle finger and defiant “f*ck you!”? 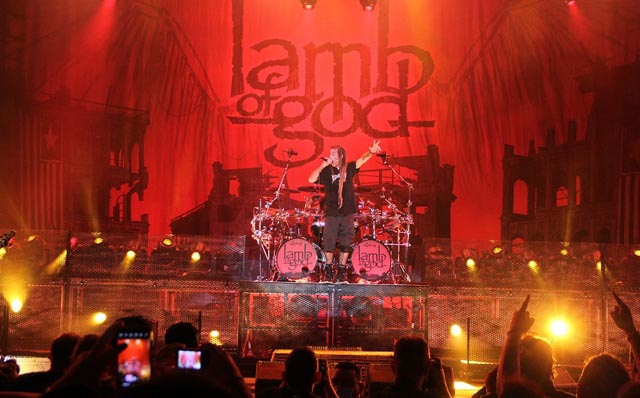 “F*ck you!” was also the general message offered by coheadliners Lamb of God, who preceded Megadeth’s slot with a set so punishingly brutal that even the VIP waitresses had to stop and headbang in the aisles. The entire venue shook with violent energy as fans lost their minds to wreckers like “Now You’ve Got Something To Die For and Laid To Rest.” It was also fantastic to experience new songs off of 2020’s self-titled album in person for the very first time, with set opener “Momento Mori” more than living up to its stomping studio version.

Pyro blasted 20 feet in the air on “Walk With Me In Hell,” and Randy screamed, bellowed, and roared his way through 65 straight minutes of blast beat euphoria, headbanging, and riser-jumping all the way. LoG has ascended to the upper realm of metaldom over their 20+ year career, and even first-time viewers conceded that this was a band at the very top of its game. Randy also echoed Jamey Jasta’s remarks earlier in the night about the venue. PNC hosted nearly a decade of Ozzfests and then Mayhem Fests, and all four bands on the bill have played one summer show or another on its grounds. However, both Randy and Jamey pointed out that they’d previously been relegated to the parking lot-based second stages as more distrusted, violence-prone bands. 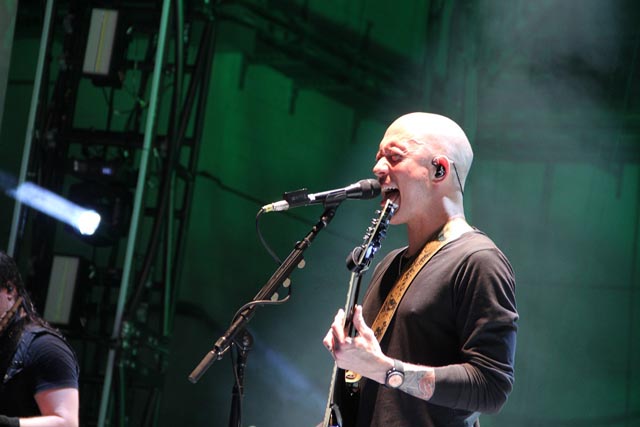 Trivium’s last visit to PNC was on 2011’s Mayhem Fest, whereas one of metal’s more clean-cut acts, they were welcomed on the main stage. Not much has changed; Matt Heafy remains one of the nicest personalities in the industry despite his roaring vocals and master-level shredding. The band’s perfectly-dialed in tunes also tend to hit the melodic metal sweet spot – the new song “Catastrophist,” released mid-pandemic, was one of the catchiest tracks of the night and seemed destined to be a setlist mainstay for the rest of their career. With many seats still unfilled during Trivium’s 7 pm slot, fans continued to party in the parking lot. Matt urged the crowd to sing, stand, and jump with the practiced mastery of a frontman who’s earned his place on the larger stages, thoroughly owning the audience by the time the band wrapped with a smashing In Waves. 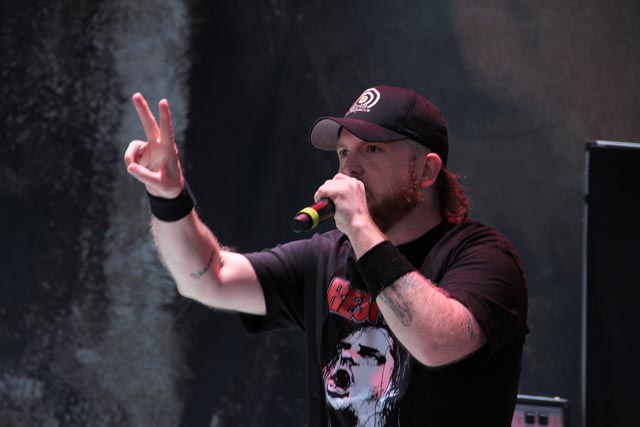 Connecticut semi-locals Hatebreed opened the show at the even earlier hour of 6 pm, playing their hearts out to more empty seats than not. But anyone who knows Jamey Jasta knows that he couldn’t care less about the number of fans in front of him. He just wants to play shows and stir up a crowd, and with wreckers like “Perseverance” and Slayer cover “Ghosts of War,” Hatebreed did just that. They also wrapped up their set with one of the most dominating song pairs of the entire show, “I Will Be Heard,” followed by “Destroy Everything.”

It’s been a long time since most of us have reveled in the swarmy rush of a live metal show, the stink of weed and cigarettes, and spilled beer mixing with damaging levels of amplified music for a sensory overload of crushing distortion. Words can’t really do justice to how goddamn great it felt to be back in a fist-pumping, headbanging crowd, despite omnipresent masks and a thinner crowd than would be expected at a show of this magnitude.

Make no mistake; live metal music is coming back, with a dozen more tours scheduled to hit theaters and clubs from now until Christmas. We’ve all been inside long enough, so get the f*ck out there and throw down when your favorite band comes to town. Metal Insider will be there – will you?